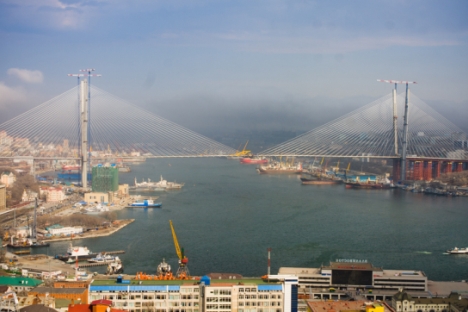 Authorities toying with the thought of slashing tax burden in easternmost provinces to spur private enterprise, investment appeal and potential for trade with China and Indonesia.

The idea to bestow tax rebates on businesses across the Far East appears to be gaining momentum at the pinnacle of the government.

It follows the Asia-Pacific Economic Cooperation forum, hosted by Russia in Vladivostok earlier this month after it ploughed billions of dollars into construction in and outside of the port city, which reconfirmed the country’s resolve to play a greater role in that part of the globe.

Both President Vladimir Putin and Prime Minister Dmitry Medvedev have now said they were toying with the thought of slashing the tax burden in the easternmost provinces to spur private enterprise, investment appeal and potential for trade with some of the world’s fastest-growing economies, such as China and Indonesia.

Some of the country’s biggest companies and foreign investors, such as steel and coal producer Mechel, natural gas giant Gazprom and Canadian gold miner Kinross Gold, operate in the Far East and could benefit from any future tax incentives.

Most recently, Medvedev said Monday that he was increasingly inclined to give the Far East special treatment. “We really need to get up the nerve and create different tax and property regimes, which is not easy,” Medvedev said at a meeting with top members of the Federation Council, RIA-Novosti reported. “In that event, we have the chances to draw some additional money. It’s absolutely obvious.”

Medvedev added that the measure would likely spark arguments in the Cabinet and draw opposition from some other regions. With his Far East comments, Medvedev was apparently responding to a speech by Federation Council Speaker Valentina Matviyenko, who had recently toured the region and recapped its problems for the prime minister at Medvedev’s Gorki residence.

Putin first raised the prospect of tax rebates when he summed up the APEC forum at a news conference September 9. He said he had discussed lower tax rates for new projects with his economic aide, Elvira Nabiullina, who was economic development minister in the previous Cabinet.

Companies that set up a new operation to pull natural resources from under the ground in the Far East could enjoy a zero rate on the mineral extraction tax, Putin said. A similar fiscal benefit is in place for eastern Siberia, he said. Tax incentives could also affect other industries, including high-tech, he added.

At the same time, Putin ruled out the establishment of free economic zones, saying that would encourage tax evasion.

Speaking a day earlier, Far East Development Minister Viktor Ishayev proposed sweeping tax holidays for new investments, both foreign and domestic. He named profit, property and value-added taxes as the targets. “The geographic remoteness of the Far East from the country’s western regions breeds extremely high outlays in all sectors,” he said.

This article can be read in The Moscow Times.