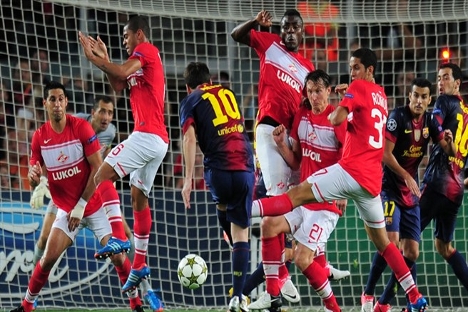 Spartak’s performance in the 3-2 defeat to Barcelona on Wednesday gives the team a good basis to improve. Source: UEFA.com

It took Lionel Messi’s sheer genius to stop Spartak Moscow from pulling off a great upset in the Champion League match.

When your opponent in the Champions League is what most people consider the best team in the world, you know that you have a giant task on hand. Now combine that with trying to stop one of the greatest football players of all time: Lionel Messi! Spartak Moscow showed tremendous resolve to fight hard and nearly pull off a major upset.

At the 70th minute when Spartak was leading 2-1, the twitterati in Moscow were just starting to hope that “our boys” will hold on and win. Barcelona had not lost the last 16 home matches in the Champion’s League, but it was a Russian team that beat them before this win streak. Rubin Kazan beat Barca 2-1 in 2009. So, the signs looked ominous after birthday-boy Romulo scored what would have been an epic game-winner, but an upset was not to be.  Messi scored twice in the thrilling match and Barcelona pulled away 3-2.

Spartak’s performance in the 3-2 defeat to Barcelona on Wednesday gives the team a good basis to improve, coach Unai Emery told RIA Novosti. “We went after the victory and a performance like this gives us something to build on for the future,” Emery said. “I can't be satisfied because we wanted to win, irrespective of how difficult it is to do so against Barcelona, even more so in the Camp Nou.”

The sheer greatness of Lionel Messi was the difference between the 2 sides. Emery justifiably praised Messi for another great performance. “To talk about Messi is to talk about pure footballing excellence. It is possible to stop him but it is extremely difficult, coach Emery said. “If you throw lots of defenders up against him, the rest of the Barca players then take advantage.”

“We were close to winning, close but you always know Barcelona are going to have chances and they had their chances in the second half and they took them,” left winger Aiden McGeady said. “A 3-2 result at the Nou Camp isn't that bad, a lot of teams come here and get beat five or six nil, so we can take a lot of heart from that.”

This performance should give Spartak (currently on a 5-game winless streak) the moral boost needed to defeat Celtic and Benfica, the other 2 teams in Group G. Spartak hosts Celtic on October 2 in their next league match. If Russia’s most famous club plays with such focus in the upcoming fixtures, then we are due for a classic on November 20, at the Luzhniki Stadium, when Messi and Barcelona come to town. The home crowd and the cold weather should give Spartak an advantage.

Barcelona is the hands-on favourite to win the Champion’s League this year, but Spartak Moscow has shown that it has what it takes to compete with the best teams on the continent.