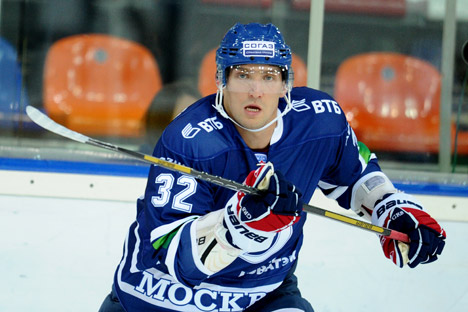 The National Hockey League has officially announced another lockout. The previous contract between the NHL and the NHL Players Association expired before they reached a new collective bargaining agreement.

The United States will, therefore, be left without major league hockey at least until January, while the Kontinental Hockey League has already started signing Russian superstars.

Discouraged by NHL financial rows, Evgeny Malkin and Sergey Gonchar became the first Russian players to sign with a KHL club – Metallurg Magnitogorsk – after the NHL locked out its players. The two have been signed through the end of the 2012-2013 season; should the NHL resume its season in January, however, Malkin and Gonchar will return to the United States.

“Malkin and Gonchar are terrific players,” Metallurg head coach Paul Maurice said. “But they will have to compete for places in the first line. We have serious competition on the team and I can’t guarantee that the two will make it into the first line at once. We’ll look at their profiles and lead them gradually into KHL games.”

The majority of the KHL clubs are already well-manned, which may mean that not so many Russian NHL players will get the chance to play in the Russian league.

“I’m not sure that the clubs will want to sign NHL players for only three months,” well-known hockey agent Sergey Isakov said. “Why take some other player’s spot and make him to play in the playoffs later without practicing? This would affect the outcome; but, on the other hand, it would generate a buzz, and the fans would love it.”

The KHL image, along with the desire of the clubs to win back their best pupils may well outweigh sports logic, when it comes to signing locked-out NHL players. Los Angeles Kings defenseman and Stanley Cup champion Slava Voinov, for instance, will have no problems entering the KHL, if he decides to return to his native city of Chelyabinsk.

“If the American club lets Vyacheslav go, we’ll take him no matter what,” said the general manager of HC Traktor Chelyabinsk, Vladimir Krechin. “Otherwise, they could send him to the farm team to keep him in shape, but we guarantee that we’ll do our best to get Voinov back to Chelyabinsk.”

The same is true for nearly all Russian NHL stars. Columbus Blue Jackets defenseman Fedor Tyutin will probably return to SKA Saint Petersburg, which he played for during the previous lockout. Yaroslavl-born Artem Anisimov (also a Columbus Blue Jacket) is, essentially, already a Lokomotiv player. Meanwhile, Alexander Semin of the Caroline Hurricanes has only to choose between the KHL Avangard team and the Russian Premier League CSKA squad.

“Sasha will play for the team that offers decent money and playing conditions,” Semin’s agent Mark Gandler said. “I know that half the KHL clubs would like to have him, but it is important that the club aim high.”

NHL superstar Ilya Kovalchuk also has multiple options open to him with Russian clubs. He has already received an invitation from his old squad at Spartak Moscow, but SKA Saint Petersburg – the richest club in the KHL – would also like to have him. It looks as though Ilya will opt for SKA, according to Kovalchuk’s official spokesman.

“We respect the Spartak administration and founders,” Kovalchuk’s agent Yury Nikolaev said. “But we have been in talks with SKA for two years now, and we have commitments. We reached this agreement a long time ago.”

Although Kovalchuk seems set to bring in bigger money with a new team, NHL superstar Alexander Ovechkin looks to remain loyal to his Dynamo Moscow club.

“We are looking forward to having Alexander on our team,” said Dynamo head coach Oleg Znarok. “He has the Dynamo spirit and honors its white and blue colors. Dynamo is in his heart, and I don’t think Alex will consider alternative proposals.”

“Professor” Pavel Datsyuk, who came to Russia during the previous lockout, was named the best player of the 2005 playoffs. All of the KHL clubs dream of getting their hands on the cunning playmaker.

“I will definitely go to the KHL during the lockout,” Datsyuk said. “I can’t live without hockey, and resting is not for me. I would like to play for a team with good chances of winning the gold. And I need to keep developing my game. These are the two main conditions. I guess the decision will be made in mid-September.”

Many NHL players decided not to keep their fans waiting, having made earlier arrangements with KHL clubs: Columbus Blue Jackets goaltender Sergey Bobrovsky has already signed with SKA, along with St. Louis Blues clutch player Vladimir Tarasenko; Semyon Varlamov of the Colorado Avalanche has returned to Lokomotiv Yaroslavl, where he played from 2006 through 2008; Montreal Canadiens leader Alexei Emelin and Columbus tough guy Nikita Nikitin have both chosen to go to Ak Bars Kazan.

“I believe Russian hockey will benefit enormously from having the best players play in Russia,” said Sergey Gimaev, who is decorated as a Merited Coach of Russia. “We are short of top-rated Russian players, so it’s great to have them back, especially ahead of the Olympics.”

President of the Russian Ice Hockey Federation Vladislav Tretiak believes, however, that there are more only benefits to Russian hockey players returning to Russia.

“This new lockout has both advantages and drawbacks,” Tretiak said. “When it comes to the Russian players, we will always welcome them back and give them a chance to play. Fans will be thrilled to see our best players in action. Moreover, Zinetula Bilyaletdinov will be able to watch potential candidates for the national team that will play at the Sochi Olympics. Still, the clubs will spend serious money on high-priced players.”

To make money to play at home – this is an offer not to be taken lightly. Yet some Russian players have made up their minds to stay in the United States and Canada. Older players are placing their families before their careers. Other players, such as New York Islander Evgeny Nabokov and Montreal Canadien Andrey Markov, prefer to rest and practice individually, rather than actually play.

“I have no wish to get back to Russia,” Markov said. “I believe that the best option for me is to stay in Montreal and work with my personal coach. The lockout will be over sooner or later, and frequent flights would tire me.”

The lockout may actually be over as early as this January, and then Russian players will return to their North American clubs. Still, Russians will have at least three months to enjoy the performances of the best hockey players in the world.

Russian NHL Players Guide by RBTH will be released soon! It is just the thing to get fan through the Stanely Cup playoff season. Readers can find out everything there is to know about Russian superstars and up-and-comers. The public can download this magazine in October 2012.