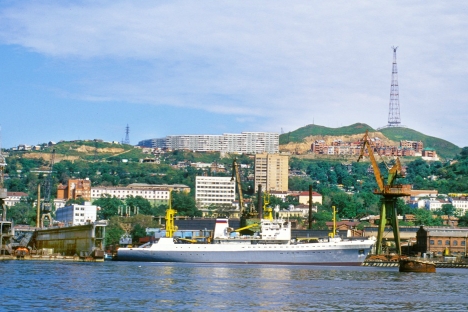 Even before the recent APEC summit, Russia’s city on the Pacific was worth a look.

Vladivostok is the final point on the Trans-Siberian Railway, the point where Russia ends, on the brink of the Pacific Ocean. But it is also a beginning, a potential springboard for Russia’s contemporary engagement with Asia and beyond, with countries on the Pacific Rim. For a city whose name means “rule the east,” such possibilities were envisioned from its earliest years.

The fact that this engagement has lagged is in part a legacy of the Cold War, when the city was an important military enclave, but closed to foreigners (particularly from the West) and hobbled in normal economic progress. The lag has also been a product of the city’s great distance from the center of Russia and especially from Moscow, some 6,000 miles to the west.

Much has been made of Vladivostok’s recent development in preparation for the 2012 APEC summit, which took place the first week of September. Official sources indicate that since 2008, over $21 billion were spent in a much-needed expansion of the city’s infrastructure and in other construction projects, including a new campus on Russky Island for the consolidated Far Eastern Federal University.

Yet even before the recent flood of money, Vladivostok had a certain gritty charm. The city is favored by its spectacular setting on hills surrounding the Golden Horn Bay. The bay’s name is thought to derive from the renowned estuary in Istanbul known as the Golden Horn, and its waters can indeed seem golden, particularly in the rich sunlight of late summer. A bonus is the extraordinary natural beauty of nearby Russky Island, until recently accessible only by ferry but now connected to the city by the world’s longest cable-stayed bridge. The island’s overgrown military fortifications from the early 20th century exert their own fascination as relics of a lost empire.

Vladivostok was founded in July 1860, when a small group of soldiers hastily erected a few buildings on the Golden Horn Bay at a site designated in 1859 by Count Nikolai Muravev-Amursky (1809-1881).  Muravev had been the driving figure in Russia’s acquisition of large territories along the Amur and Ussuri Rivers following treaties negotiated with the Qing Dynasty and ratified by the Convention of Peking in 1860.  As governor-general of Eastern Siberia, Muravev succeeded in rapidly consolidating the new gains through the use of army posts and the creation of Amur Cossack units from Siberian peasants.

The establishment of an active port at Vladivostok was an essential part of Muravev’s strategy. Indeed, the town’s first thoroughfare was named American Street after the ship “America,” on which Muravev sailed into Golden Horn Bay in 1859. In 1873, the street was renamed Svetlanskaya--the name it bears to this day--in honor of the visit of Grand Duke Alexei Alexandrovich on the naval vessel “Svetlana.”

Not surprisingly, Chinese comprised a substantial portion of the town’s population in its early decades. The labor and skills of the Chinese—and to a lesser extent the Koreans and Japanese--were essential to the growth of Vladivostok, where Russian settlers were still difficult to come by. In 1888, Vladivostok replaced Khabarovsk as the administrative center of the vast Eastern Siberian province, and the following year it was officially designated a military fortress. Administrative and military personnel still formed the core Russian population.

Eventually, the lure of commerce and opportunities created by railroad construction and port development led to a substantial increase in the city’s size. By 1897, Vladivostok had a rail link to Khabarovsk, located 475 miles to the north at the confluence of the Ussuri and Amur Rivers. And in 1903, Vladivostok was connected to Moscow via the Trans-Siberian Railway. By that time, the city’s population was over 30,000. In 1899, the Eastern Institute was established as the city’s first institution of higher education. Its large brick building, now a part of the federal university, still has an imposing presence.

The architecture of Vladivostok at the turn of the 20th century followed the Western styles characteristic of a cosmopolitan port and boomtown. Foreign and Russian architects designed commercial buildings that still give the central city its distinctive appearance. These exuberant, if somewhat faded, buildings include most notably the main post office and the Kunst and Albers department store, founded in 1864 by two German émigrés from Hamburg. Their entrepreneurial skills eventually produced the largest chain of department stores in the Russian Far East.

The city’s sizeable German and Polish communities supported large brick neogothic Catholic and Lutheran churches, now restored to active use. Orthodox churches also arose, including the main Cathedral of St. Nicholas, built in 1907 as a memorial to Russian sacrifices in the Russo-Japanese War (1904-1905). Despite the upheavals caused by that war and the ensuing revolution of 1905, Vladivostok benefited from accelerated construction for commercial, educational, and administrative purposes. The city’s hills also gave rise to apartment buildings and elegant houses, including the recently restored mansion built for Jules Bryner, a Swiss émigré who made a fortune in shipping. Incidentally, Bryner was the grandfather of the noted actor Yul Brynner.

As elsewhere in Russia, the civil war that followed Russian defeats in World War I replaced dynamic progress with chaos and misery. During that period, Vladivostok witnessed frequent fighting among anti-bolshevik factions, as well as occupation in 1918 by contingents of foreign troops, including the Americans and Japanese. Not until October 1922 was the city formally joined to what had become Soviet Russia.

During the 1930s, Vladivostok experienced uneven development and international tensions caused by Japanese imperial expansion in Korea and Manchuria. In World War II, Vladivostok served as an important link for Lend-Lease aid from the United States, but after the war the city, with its strategic military and fleet installations, was firmly closed to outsiders. Nonetheless, in 1974 the city was the site of a famous summit meeting between Leonid Brezhnev and Gerald Ford, and in 1992 Vladivostok was once again opened to foreign visitors. Unfortunately for the city's appearance, the late Soviet period created intrusive, uninspired architecture that did little to advance Nikita Khrushchev’s boast during a 1959 visit that Vladivostok would surpass San Francisco in its beauty.

With a population of some 600,000, Vladivostok today is poised for substantial investment and major change, yet its architectural legacy from over a century ago is an essential part of the city’s cultural and physical identity. With an intelligent balance of growth and historic preservation, the city on the Golden Horn may indeed become a partner of the city by the Golden Gate.