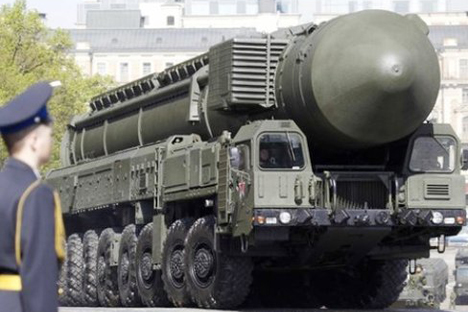 Yars missiles are to replace Soviet-manufactured Topols in the next 10 years. They can ensure Russia’s minimum combat readiness amid the deployment of a U.S. anti-missile defence shield.

Russia’s Strategic Missile Troops are among a few remaining parts of the military machine that ensure Russia’s security as the government realises the significance of keeping the rocket forces in order. However, the recent rearmament and upgrade of the missile troops was also greatly contributed by the Moscow-based Institute of Thermal Technology and Votkinsk Machine Building Plant which designed and manufactured Topol, Topol-M and Yars intercontinental ballistic missiles.

Back in 1997, when the mass production of the silo-based Topol-M missiles began, military officials knew that the silo-based and mobile missiles, as well as Topol-based Yars rockets, will be the main weapon of the Missile Troops. Mobile complexes were considered to be the most promising systems, though silo launchers were perfectly safe and technically flawless already in the late 1980s. They were capable of protecting a missile mounted onboard even from a nearby nuclear explosion but failed to protect it from precision-guided munition directly hitting a silos lid. In the 1990s, precision-guided weapons were showcased in all their glory.

Mobile complexes gained more importance after Dmitry Medvedev and Barack Obama signed the START-3 Treaty limiting strategic weapons. The paper removed limitations on the areas of basing and deploying mobile complexes so now it’s impossible to predict where from a launch could be conducted. This hampers locating and intercepting a missile. Thus, mobility appears to be a more secure protection than a silo made of tons of reinforced concrete and centimetres of armour steel.

Yars missiles are to replace Soviet-manufactured Topols in the next 10 years. If the military men make it, they will ensure Russia’s minimum combat readiness amid the deployment of a US anti-missile defence shield. Maximum readiness depends on strategic nuclear forces funding. Mobile complexes also need protection, namely deployment in the areas protected by aerospace defence systems which will secure missile complexes from an unexpected strike. This will prevent losses and guarantee total destruction of any potential aggressor. As the Cold War has shown, this will be enough not to turn a cold war into a heated battle.