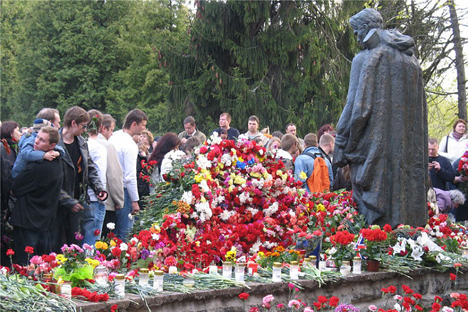 History and politics remain a major flashpoint between Russians and citizens of the former Eastern bloc.

Aleksandrs and Irina met through a hospitality exchange website. Being an intrepid traveller, Irina, a resident of St Petersburg, decided to spend the last weeks of summer in Italy. She found a host in Aleksandrs, a Latvian who has been living in the medieval town of Siena in Tuscany for the last 3 years. The evening started out pleasant enough with a nice meal over good local wine, but the elephant in the room reared its trunk and the conversation tilted towards history and politics.

I had seen many a heated debate between Russians and citizens of Baltic countries and tried to change the topic, but the two of them were in no mood to back down from what each believed was the absolute truth. “The Soviet occupation of the Baltics was repressive and probably as bad as the Nazi occupation,” Aleksandrs fired out. Irina then accused Latvians of being Fascist and glorifying Nazism. The duo turned their attention towards me and wanted my opinion, to which I politely said that we are in Italy and this is 2012 and there’s no reason that we should be spoiling a perfectly lovely summer evening debating something this controversial.

The debate turned uglier and uglier. Enraged at her host’s “defence of fascism,” Irina decided to look for a hotel at 11 pm in sleepy Siena and walked out of the apartment. Both Irina and my Latvian friend are in their mid-20s and their knowledge about the days of the USSR comes mainly from what their parents tell them or what they read in official history books. History for them is black and white and there are no shades of gray.

People like Irina have more opportunities to travel to Europe than her parents would have ever dreamt of in their youth. The fact that there is so much money in Russia these days and that Russians have a huge spending capacity has given many of them the confidence they lacked in the 1990s. I am not hinting that money has made a large number of people arrogant. It’s just that for many, the painful 1990s are a period that has to be forgotten but there has to be a period in the past that can be looked upon with nostalgia. The Soviet period fits the bill for many, whose parents were relatively well off in the USSR.

The Irinas of this world find it difficult to believe that citizens of former Soviet countries or satellite states don’t look back at the past with such nostalgia. Most Poles, for example, don’t have anything personal against ordinary Russian citizens but don’t exactly see the Soviet and Russian states of yesteryear in a positive light. The underlying tensions came to the limelight when Poland was a co-host of the European football championships a few months ago. The violence that preceded the Russia versus Poland match on June 12 and the provocations from both sides added fuel to the fire.  Hurling a giant “this is Russia” banner at the stadium Warsaw was hardly an act that would invite rose petals from Polish fans given the painful history between the countries.

Attitudes within the European Union set a good example for Russians and Eastern Europeans, who have a difficult history between them. The Dutch have learnt to put the bad feelings of the German occupation of their country behind them. Italians remember the Caporetto massacre but don’t hold it against Austrians visiting their country. There is indeed a painful history within the continent but the lessons definitely seem to have been learnt.

It should be noted that many Germans rave about the special treatment they get in Russia these days and how Russians seem to like German culture. World War II or the Great Patriotic War is the most important part of history class in Russian schools but the excesses of that war don’t come in the way of Russians respecting and admiring contemporary Germany.

It’s a different matter when it comes to Eastern Europe. There’s talk of “ingratitude” for everything Russia did for the former republics and satellites. Allegations and counter-allegations fly back and forth in the discourse over recent history.

Barriers for travel between Russia and “Europe” are reducing with each passing day. It’s important for Russians to be more sensitive about what people from Eastern Europe may have had to endure in the past. At the same time, it’s wrong for people from the Baltic countries or Poland to expect ordinary Russians to be apologetic for the “wrong-doings” of the past or to look back at yesteryear with the same kind of feelings that those in Budapest, Warsaw or Tallinn do. By putting politics and history aside, the “foes” would easily be able to see how much they have in common and how closely they are connected both culturally and spiritually.