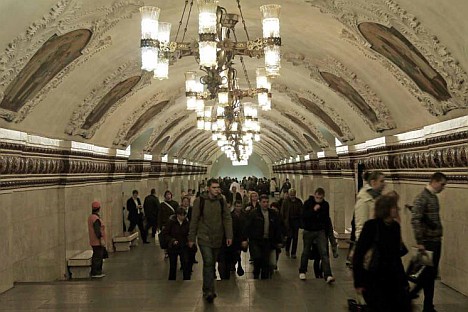 Commuters on their way to work. Source: Mathew G. Crisci.

The planned day four schedule was low key: morning in and around a few Moscow neighborhoods, then an early evening high-speed train to St. Petersburg.

Riding the Russian Metro, particularly the one in Moscow, is more than just transportation. It is a rich cultural and historical experience that shares some commonalities with underground systems in London and New York, but in totality is unlike any underground anywhere else in the world.

The first thing that strikes one is how far below ground they reside. Some say Stalin (and the City’s planners) designed it that way to avoid disruption if/when the inevitable invaders dropped bombs, some say it related to the cities hills and valleys, some say it’s a combination of both. All aboard the Moscow express.

If a picture worth a thousand words, then this 84 second video should be worth a few million. I just let the camera run from the train platform to the top of the escalator.

Besides depth other features of the Moscow metro include: the sheer beauty of design, the rich, moving remembrances of World War 2, and their cleanliness and efficiency. There is also uniquely Russian touches like the soldier‟s “good luck” dog which commuters rub every day.

While some Russians would like you to believe the “entire” metro is as depicted as above, there are many reminders that the Moscow metro, like big city metros everywhere, is a basic means of transportation and last minute shopping for the middle class. As a native New Yorker, once inside the cars I could have sworn I was on a Manhattan subway.

The Neighborhoods of Moscow

First stop was Ploschad Revolutsii, not far from Red Square. As I left the train station, I walked by a row shops lining a passageway below ground level. They sold everything from sewing thread to containers of milk. The experience felt a bit strange, like being surrounded by an endless number of 7-11 convenience stores.

As we wondered around, things seemedlike a snapshot of normal city life. There were no patrolling secret police and KGB operatives hiding in the bushes, just smiling people and families playing with their children. I thought about the mysterious Russian images painted by influential director Ridley Scott and all his movie maker friends. I wished ordinary Americans could see what I saw.

Our second stop was a mistake, Arbat Street. I tried to tell Sergei this group was a bit too sophisticated for that. But, as I learned, the schedule said Arbat Street, and that was that. (Arbat Street was once a beautiful, thriving European style neighborhood filled with artistic types and politicians of influence. But, like everywhere, times change. Today, Arbat Street is a tourist trap. A combination of souvenir shops, bad art, and odd characters. Arbat Street to Moscow is like it 42nd Street between 9th and 10th Avenue is to New York City and the tacky portions of West Hollywood Boulevard is to Los Angeles.

In fairness to Arbat Street, there had been a few changes since I was there 3 years prior. A 60’s American style diner packs them in, and a French bakery offering brioche, croissants and baguettes made on site now supplement eating staples, McDonalds, Wendy’s and Burger King. Who knows, even Alain DuCasse may one day open a 5-star eatery on Arbat!

Gads, How Can I Be So Stupid!

It was now near 2 p.m., time to return to the hotel, pick up our bags and head to the train station for a high speed trip to St. Petersburg. The Russians are proud of the train and the service, and rightly so. Just three years ago, the train did not exist, and it took 8 hours to go from Moscow to St. Petersburg by rail. Now it’s a pleasant 4 hours. Sergei delivered us to station centre with two hours to spare. “Better to be early for security and such,” explained Sergei. (In Russia, it doesn’t matter where you go, everybody is urged to carry their passport at all times.) As I discovered, the other reason to get there early is that the cab has to leave you about ¾ of a mile from the actual entrance. No small feat with all our baggage, since porters did not exist.

As the group chatted in the station waiting area, David and Charles picked up some odds and ends at the various food shops for the ride. (Cheaper than the train rationalized David). 40 minutes before departure, the meticulous Sergei explained step-by-step how security worked. He also assured use a English speaking guide, Maria, would meet us right on the platform in St. Petersburg. As he spoke, I reached for my ticket and passport. My relaxed posture stiffened, my complexion turned pale and pained. I had left my passport in the safe in my hotel room! Visions of sitting in the train station all night by myself, danced in my head.

The unflappable Sergei had an immediate solution. “I will call the hotel, tell them where the passport is, and they will send a cab. I will meet the cab at the side door.” I wondered how that could be… Sergei reassured, “Not to worry, such matters are easily solvable, I was KGB.” He smiled. I didn’t ask. “But, the fix will be expensive.” 2,000 rubles (70 $). 36 minutes later, I was boarding the train with my passport. Like magic, not only had Sergei secured the passport, arranged a driver to come right to train entrance and ushered me through security, but personally escorted me to my train door.

After taking a few deep breaths, I collapsed into my seat. During the next four hours I had a few more memorable experiences. I learned the terrain was flat, boring and uninteresting virtually the entire way. My mind imagined Omar Sharif in Dr. Zhivago trudging across this barren tundra in the middle of the winter. Ugh!!!

I also chatted up David, who was sitting at the other end of the car, and learned some hilarious facts. David and Joyce, his wife of 52 years, lived in the tiny hamlet of Lordington (16 homes), 6 miles from Chichester, a few hours outside of London. He proudly explained Lording was a “Broad Free Zone,” and as long as he was “unofficially” in charge, dial-up service would remain the norm. (Seemed odd for a self-proclaimed early ‟60's computer innovator, but I just let it slide). However, I did asked if the broadband free thing was his greatest accomplishment as Lordington Ruler and Chief. “No, no,” he replied emphatically. Turned out he had also appointed himself Head of Sewerage. While holding that title, David had completed an analysis that clearly demonstrated carting sewerage out by Lorry to a traditional dump was far more expensive than building holding tanks for the sewerage, converting it to natural waste and discharging it “properly” in a nearby river.

“While the costs were not insignificant, $3,000 pounds for legal fees and 19,000 for the holding tanks, the project would quickly pay back when divided by the number of Hamlet residential homes in our hamlet. Everyone readily agreed except one part-time dissident. Eventually, she recanted. Today, I‟m proud to say we are a “Lorry Free” hamlet. Our only costs are for a modest amount of electricity to run the system and the occasional system maintenance.”
As the Brits say, at this point I was not sure if David was “having me on.” As he continued, I realized his passion. “We’ve even established billing apportionment procedures, and recently we created transition protocols, you know if I become incapacitated, somebody has to be Director of Sewage, even if it is an unpaid position.” David then winked, “Since we’re a rather senior group, we also decided, should no one is able to serve, an outside legal manager would automatically be appointed.”

Knowing everything I needed to know about hamlets, sewerage and such, I returned to my seat. Only then did I realize the man that had been sitting next to me was about 350 pounds, pounding down a liter of red wine and nibbling on a massive, one kilo dark chocolate bar with nuts and fruit while sneezing, sniffling and coughing. About all I could do was visit the bar car 32  with some regularity, although it was quite clear my traveling companion was not crazy about the idea of moving his “moveable feast.”

On my third trip down the aisle, Joyce commented. “Matt, how are you ever able to do it? We can hear that bloke way over here. It must be a ghastly experience, that will teach you about forgetting your passport!”
We arrived right on time at 9:45 PM. It was still light, the Russian anthem was playing on the loud speaker system, and we were greeted by a beautiful guide, Maria, with an intoxicating smile, and an assistant to carry our bags. I knew things would be better.