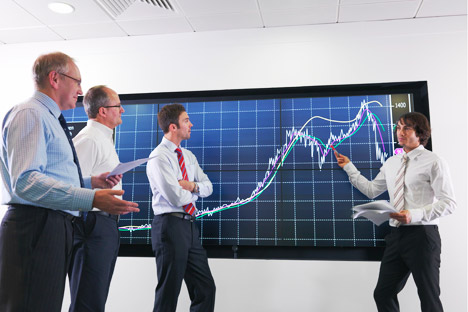 The deepening Indo-Russian relations are visible in bilateral trade which is set to double to $15 bn in 2012. Source: Getty Images

The deepening Indo-Russian relations are visible in bilateral trade which is set to double to $15 billion in 2012 from the trade volume of $7.5 billion five years ago.

The next Indo-Russian Inter-Governmental Commission on Trade, Economic, Scientific, Technological and Cultural Cooperation  (IRIGC-TEC), co-chaired by the Indian External Affairs Minister and the Russian Deputy Prime Minister, would take place in New Delhi on October 15, 2012. Among other things, the IRIGC meeting would finalise the agenda of Russian President Vladimir Putin’s India visit.

Putin is expected to reach New Delhi on October 31 evening, have delegation-level talks with Prime Minister Manmohan Singh in New Delhi’s Hyderabad House on November 1 and meet other top Indian political leaders like President Pranab Mukherjee, UPA chairperson Sonia Gandhi, her son Rahul as well as leaders of the opposition like L.K. Advani, Sushma Swaraj and Arun Jaitley, according to Indian diplomatic sources.

It won’t be wrong to describe the IRIGC as the steering wheel of Indo-Russian ties or as a Joint Steering Committee of India and Russia that takes their bilateral relations forward in a sustained manner.  The IRIGC is the main institutional mechanism supervising economic cooperation between India and Russia. It integrates six working groups on economic and trade cooperation, mines and metallurgy, energy, tourism and culture, science and technology, and IT. The 17th IRIGCTEC meeting took place in Moscow on November 18, 2011.

The vast and diverse areas covered by IRIGC indicate the expanse of all-round Indo-Russian cooperation. Two key areas under its ambit are: the Indo-Russian Forum on Trade and Investment and the India-Russia CEO’s Council. These are primary mechanisms to promote direct bilateral business-to-business contacts. The former was established in 2007 and co-chaired by the Commerce and Industry Minister of India and the Russian Minister for Economic Development, while the India-Russia CEO’s Council was established in February 2008 and is co-chaired by Mukesh Ambani, Chairman Reliance Industries Ltd, and Vladimir Yevtushenkov, CEO of Sistema.

An important agenda of the October 15 IRIGC meeting would be to thrash out an agenda for Putin’s India visit – a tenuous and complicated task considering that the two are closely collaborating on virtually everything important thing under the sun. This meeting would also take up a large number of convergences between the two sides and build these up further while a few contentious and sensitive areas would also come up for discussion. The diplomats here describe the IRIGC meeting as a “semi-final” before the “grand final” – the 13th annual summit between India and Russia to be held in New Delhi on November 1, 2012.

Indo-Russian ties have gone from strength to strength since the signing of the “Declaration on the India-Russia Strategic Partnership” in October 2000 during the visit of President Putin to India. Twelve years on after Putin’s historic and highly successful India visit, the Indo-Russian ties have blossomed and acquired a qualitatively new character with enhanced levels of cooperation taking place in almost all areas of the bilateral relationship including political, civilian nuclear cooperation, security, trade and economy, defence, science and technology and culture.

Since Putin’s October 2000 India visit, several institutionalised dialogue mechanisms were put in place under the rubric of Declaration of Strategic Partnership that ensured regular and close interaction between the two sides. Ten years after this ground-breaking visit, the then Russian President Dmitry Medvedev visited India in December 2010 which further elevated the strategic partnership to the level of a “Special and Privileged Strategic Partnership”.

The IRIGC mechanism is actually two-fold. There are two Inter-Governmental Commissions between India and Russia -- one on Trade, Economic, Scientific, Technological and Cultural Cooperation, co-chaired by the External Affairs Minister and the Russian Deputy Prime Minister which will be meeting in New Delhi on October 15. The other IRIGC is on Military Technical Cooperation co-chaired by the two Defence Ministers. Both these Commissions meet annually.

The Indo-Russian cooperation in the military technical cooperation sphere has evolved from a simple buyer-seller framework to one involving joint research and development, joint production and marketing of advanced defence technologies and systems. The BrahMos missile system is an example of this type of cooperation. Joint development of the Fifth Generation Fighter Aircraft and the Multi Transport Aircraft, as well as the licensed production in India of SU-30 aircraft and T-90 tanks, are other examples of the ongoing Indo-Russian flagship cooperation programs.

Other Areas of Cooperation

Besides, India and Russia have also been collaborating in several high-technology space projects. Under the 2004 Inter-Governmental Agreement on “Cooperation in the area of exploration and use of outer space for peaceful purposes”, the two countries are cooperating on projects such as the Moon mission Chandrayaan 2 and the Human Space Flight Project. On 20th April 2011, the jointly developed Indian-Russian Student Satellite “Youthsat” was successfully launched by India on a PSLV rocket.

The deepening Indo-Russian relations are also visible in bilateral trade which is set to double to $15 billion in 2012 from the trade volume of $7.5 billion five years ago. The two-way investment between the two countries stands at approximately $7.8 billion.  At this rate, the target of $20 billion worth of bilateral trade, set for 2015, is likely to be achieved much earlier. The new sunrise areas for making it happen have been identified as energy, pharmaceuticals, IT, steel, hydrocarbons, aerospace, food products and diamonds.

President Putin is now all set for a substantive and very important visit to India. The political storm that died down in India must have been on the minds of policy-makers in both New Delhi and Moscow. Indo-Russian relations, however, have been so mature and rock solid for decades that it doesn’t matter much which party runs India. Whichever party is in power in New Delhi, now or in future, the Indo-Russian relations would only go from strength to strength.