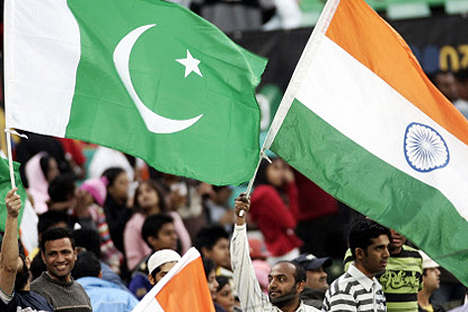 The current state of relations between India and Pakistan gives Russia the chance to strengthen its geo-political positions in South Asia. Source: Press Photo

The current state of relations between India and Pakistan gives Russia the chance to strengthen its geopolitical positions in South Asia.

First of all, the Indian authorities are under the impression that Pakistan’s ‘international influence’ is weakening significantly due to the escalation of the destructive and disintegrative tendencies within the country. In its assessment of Pakistan, India’s political establishment does not seem to be exaggerating the significance of its neighbour’s nuclear capabilities. Nor is it overstating the aforementioned external assistance offered to this country on a large scale, or the transport development boom aided by China, including construction of the strategic port in Gwadar. Apparently, New Delhi is positive that, eventually, Islamabad will have to revive its bilateral relations with India under the influence of objective factors.

Second, India’s “strategic elite” does not regard the army as an all-important political asset of Pakistan. Every now and then, the Indian press publishes reports on tensions in the Pakistani military, particularly between Punjabis and Pashtuns. The ties linking certain army units to the Taliban further undermine the viability of this institution. Finally, we should not write off completely Pakistani claims that India wants to “destabilise" the situation in Baluchistan province, on the one hand, and get a foothold in Afghanistan after the American forces withdraw, on the other. This would serve to surround Pakistan from both the west and the east, as was the case when the Soviets entered Afghanistan. According to Islamabad, its view is supported by the vigorous investment activities pursued in Afghanistan by India, which has already become the largest regional investor in the economy of this area.

Third, New Delhi expects Pakistan to exhaust its developmental capacities by relying heavily on external aid and militarisation of the economy. The “moment of truth” is looming on the horizon for the Pakistani elite, which will then have to lay a firm foundation of its socio-economic policy and establish priority areas for its foreign economic affairs. The Indian authorities are certain that the geographic proximity of the two countries will prove an irrefutable argument in favour of bilateral economic ties, given that Prime Minister Singh, unlike most of his predecessors, has a good reputation with the business community as a professional economist capable of defending the interests of entrepreneurs. The country’s key business associations – the Federation of Indian Chambers of Commerce and Industry and the Confederation of Indian Industry – will most certainly support Manmohan Singh in his Indo-Pakistani economic undertakings.

Fourth, it seems that New Delhi has come to the conclusion that the schism between Pakistan’s civil and military elites was inevitable, since neither of them is capable of even slightly stabilising the situation in the country on their own. Against this backdrop, the “amicable” policy pursued by Manmohan Singh seems logical: by suggesting “peacemaking” initiatives to Islamabad and highlighting its willingness to seek compromises, India strives to obliterate the doctrinaire image of “eternal foe” from the social and political discourse of Pakistan, thus depriving it of the possibility to unite the country around negative (in this case, anti-India) sentiments.

This strategic policy adopted by India towards Pakistan will most likely continue in the future – atleast, as long as the Singh government remains in power.

The current state of relations between India and Pakistan gives Russia the chance to strengthen its geo-political positions in South Asia, which is becoming an increasingly more important player in transporting energy resources from the Persian Gulf area to the Far East. Thus, Russia could expand its efforts to combat the “export” of radical extremist Islam, including both its theoretical foundations and practical implementations, to Central Asia – a vital region for Russia.

In this light, it seems reasonable for the Russian Federation to step up its foreign political activities in the area along two lines.

The first would be a dynamic return to South Asia, a partial return to the Soviet foreign policy of the 1960s – much like the Indo-Pakistani summit mediated by USSR Premier Kosygin in Tashkent. Russia would also follow up on the efforts to leverage the Shanghai Cooperation Organisation (SCO) institutions and practices with the purpose of initiating discussions on general security issues in Central and South Asia. The issues directly affect the interests of Russia, India and Pakistan (in particular, the North-South International Transport Corridor [ITC]).

Application of the SCO’s mechanisms is particularly important for relations between Russia and India, as New Delhi still views the SCO as an institutional branch of Chinese foreign policy. There is little doubt that a full- fledged engagement of India and Pakistan in the SCO is in the strategic interests of Russia.

Secondly, it has been argued that the time has come for Russia to stand up to the United States by rolling out its own activities in South Asia. Such steps could focus on bringing ties with India back to the Soviet level and “returning” to Pakistan. India and Pakistan may, in fact, share these goals in pursuit of their own specific interests. Moreover, China also appears to share Russia’s concerns about the increased geopolitical activity of the United States in South Asia and its adjacent territories. In particular, Beijing views the events in Tibet and Xinjiang as part of the U.S. strategic plan to “surround” China. Deepening the quadrilateral cooperation between India, Pakistan, China and Russia may confine the dissemination of potentially destabilising ideas and practices in South and Central Asia.

The rapprochement of Russia and Pakistan observed in recent years provides the former with important long-term benefits in the southern part of Central Eurasia due to the diversification of the structure and functions of Russia’s foreign policy toward South Asia, which enhances its potential to influence the development of events in the Middle East.  The rapprochement also provides additional opportunities for exerting “soft” influence on India, whose ruling elites have been systematically implementing the policy, which has run contrary to the “Nehru line”, as regards its foreign policy implications, for the last 7 or 8 years.

There are also greater chances for Russia to add “strategic depth” and sustainability to its standing and policy in both South and Central Asia in the light of processes underway in such organisations as CSTI and SCO. This would include higher geopolitical effectiveness of interregional arteries such as the North-South ITC, which is of vital interest to India, as it happens to be the shortest route linking India to Central Asia, Russia and Western Europe, with Iran invariably serving as the core of this line.

The strengthening of ties between South and Central Asia may also gain momentum if Russia returns to the strategic concept that provides mutual benefits to energy suppliers (Russian, Iran, several Central Asian states) and consumers (China, India and Pakistan).

The full-fledged participation of India, Pakistan, Afghanistan and Iran in the SCO would assist Russia in reaching it strategic goals in South Asia.