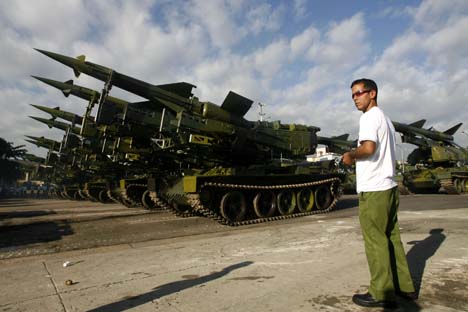 From geopolitical and geostrategic standpoints, it is very important for the United States to maintain its presence in Afghanistan. Source: AP

Russia has no choice but to foster cooperation with Afghanistan in fighting the drug trade and to try and minimise the consequences of Islamist radicals joining the government in Kabul.

A knot of domestic political problems is fraught with serious complications for Afghanistan’s future. Engulfed in a perennial civil war and torn apart by increasingly powerful centrifugal forces, the country could face the very real prospect of partition along ethnic or religious lines, as was the case in former Yugoslavia or in Libya after the ouster of the Qaddafi regime.

The country could be split into a Shiite north (populated by Tajiks), a Sunni south (Pashtuns), and a Buddhist centre (the so-called Hazarajat). This threat has been pointed out by a number of political analysts, including some from Pakistan, who are particularly preoccupied with the possibility of the emergence of an independent Pashtunistan as a homeland for Afghan and Pakistani Pashtuns.

Many observers have attributed this possibility to the position of the United States. Washington, which has formally accomplished its goal in Afghanistan of liquidating Al Qaeda’s mastermind and establishing a presence in the region through a strategic partnership agreement with the Afghan Government, will not be particularly concerned about the future unity of the country. The “divide and rule” principle hasn’t lost any of its importance.

Moreover, if its arrangements with Kabul are any indication, the United States will continue to play the role of an “overseer” in Afghanistan under the pretext of the region’s importance and the instability in neighbouring Pakistan with its nuclear weapons. It is worth noting that according to an opinion poll, 54 percent of Americans support a withdrawal of troops from Afghanistan as quickly as possible, by 2014, without waiting for a power transfer to the Afghan leadership.

In view of all these factors, Barack Obama may become tempted to speed up a settlement with the Taliban as part of his presidential campaign, even without inviting his “Afghan friends” to join the process. Recent reports of a Taliban representative office opening in Qatar seem to confirm the possibility of an American-Taliban dialogue on the role of the armed opposition in Afghanistan’s government structures.

From geopolitical and geostrategic standpoints, it is very important for the United States to maintain its presence in Afghanistan. The US would be quite happy if the Taliban, after sharing power in one way or another, agreed to look the other way while American military bases temporarily remained in the country. The Americans could then meet the Taliban halfway by not interfering in the formation of a new ruling coalition in Afghanistan, even if extremist and radical sentiment (typical of the Taliban movement) made its way there.

In other words, according to some political analysts, the United States won’t be particularly concerned about how the situation in Afghanistan evolves once a compromise with the Taliban has been reached, just as it didn’t care about the situation in Iraq after its pullout, despite worsening religious strife and increasing terrorist activity. The most important thing for Washington is to not lose its military presence in the Islamic Republic of Afghanistan, which is in line with its geopolitical interests.

The Americans, who effectively made the Taliban movement into an active military and political force and used to manipulate it to serve their own interests, wouldn’t be above trying to use this structure once again in a direction they consider appropriate. A case in point is the political and ideological influence that the Taliban were exerting in the end of the 20th century on Central Asian states (Russia’s CIS allies). Such courting could resume in one form of another after the Taliban joins an Afghan coalition government.

The protest and opposition movements that Tajikistan went through and those that arose on multiple occasions in other Central Asian countries, like Kyrgyzstan, point to an impact of external factors on the internal political situation in the Central Asian region. This has been further confirmed by the outcome of the developments in the Middle East, where protest movements, aided in multiple forms from outside, have led to the ouster of regimes disliked by the U.S. and its NATO allies.

In this sense, the American administration would find it convenient to use the Taliban once again to achieve its objectives in the Central Asian region, and to try and weaken its links with Russia, including as part of the CIS and the SCO.

This has created a serious dilemma for the Afghan ruling elite led by President Hamid Karzai. On the one hand, a transfer of all power in the country, including military power, to his administration, accompanied by an American withdrawal without reaching an agreement with the Taliban, would be a serious test of his resilience. Failing this test could be fatal for his rule, even if American military bases stay. On the other hand, Karzai could also lose power if the Americans made a unilateral deal with the Taliban.

Even if the Taliban can agree on a coalition government before 2014, that is, before the planned withdrawal of U.S. troops, this still does not guarantee that Hamid Karzai will remain head of state. Much will depend on the power balance within the new coalition structure that will comprise various forces, something that will inevitably lead to a weakening of Karzai’s personal standing and the influence of his supporters as other contenders vie for the top job.

There are a number of places where Karzai might look in order to rally support. This ranges from domestic forces represented by various ethnic groups like the Tajiks, Uzbeks, or Pashtuns, all the way to outside players that including the regional heavyweights like Saudi Arabia, Pakistan or Iran. A separate bet could be made on regional associations such as the SCO or the Dushanbe Four.

Cooperation with or participation in these associations would increase the prestige of the current Afghan authorities and strengthen their positions somewhat ahead of future changes and transformations. It is these considerations that have been pushing Karzai towards more active contacts with Russia, including as part of the Dushanbe Four and the SCO. It is well known that the Islamic Republic of Afghanistan is now an observer at the Shanghai Cooperation Organisation and aspires to become a full member.

It appears that a lack of confidence in the future has been forcing President Karzai to diversify potential sources of support both within his country and internationally. On the other hand, this kind of policy betrays the president’s rather sober assessment of the behaviour of his allies, especially the United States, which is withdrawing their troops from Afghanistan by 2014.

The situation in Afghanistan thus remains quite precarious. It is possible that the contained civil war, which has lost some steam over the past couple of years thanks to an offensive undertaken by the international coalition and the Afghan army against the Taliban, could flare up again.

An analogy could be drawn here between the current situation, where the decision has been made to pull American troops out of the Islamic Republic of Afghanistan by 2014, and the situation in Afghanistan in 1988, after the Geneva accords were signed and the Soviet withdrawal began. Despite the obligations they assumed to not meddle in Afghanistan’s internal affairs, infiltration of the mujahideen from Pakistan’s territory continued unabated, while the opposition refused to negotiate with Kabul in an attempt to finish off the regime of the People’s Democratic Party.

Something along these lines could happen in the nearest future ahead of the U.S. pullout. If the Americans fail to cut a deal with the Taliban, intensified warfare by the opposition is all but guaranteed. Apparently well aware of that, the current government will in its turn be looking both inside and outside the country for new forces capable of containing the civil war.

Russia will have to act to prevent a new round of tensions at its borders with CIS countries, if the civil war in Afghanistan starts revving up again. There is also a possibility that a new coalition with the Taliban makes a U-turn away from cooperation and moves towards an ideological confrontation and subversions against the SCO members. In any case, at this stage Russia has no choice but to foster cooperation with the government of Afghanistan in fighting the drug trade and to try and minimise the consequences of Islamist radicals joining Afghanistan’s government structures. The latter could happen as a result of a compromise with the Taliban.

What’s important for Russia is that whatever shape the new Afghanistan eventually takes, pro-Western, radical or liberal Islamist, democratic, or theocratic, it should not be used against the interests of Russia or its regional CIS partners, their stability and security.

The author is Ambassador Extraordinary and Plenipotentiary, Advisor to the Diplomatic Academy of the Russian Foreign Ministry.