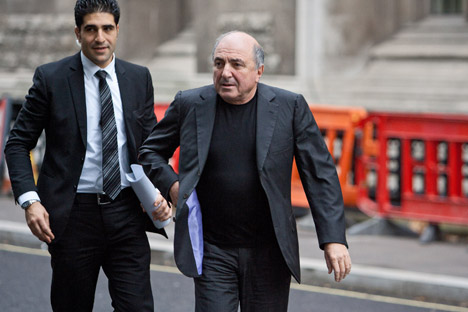 The government of the Samara region has filed a lawsuit with London's High Court seeking the recovery of 989 million rubles in debts from businessman Boris Berezovsky (pictured right). Source: Kommersant

Having failed to summon London resident Boris Berezovsky to legal proceedings in Russia, Samara’s regional government is now seeking $29 million in damages from the former oligarch through London’s High Court. The government of Samara has budgeted up to $2.3 million for legal fees. Berezovsky himself denies any blame in the matter.

In a court case filed on Sept. 7, Boris Berezovsky and his former business partner Yuly Dubov are set to defend themselves against claims being brought by Samara’s regional government.

“The case has been prepared by the government’s own lawyers. Negotiations are under way with a law firm in London, but we will not be announcing who will be representing the government’s interest in court until they are complete. The costs of our counsel in the case will be met from the funds that we have already succeeded in recovering, along with budgetary funds – these are our only funding sources for the case,” a member of the Samara government press office said.

In 2009, the Krasnogorsk Courthouse in Moscow Region found Berezovsky and Dubov guilty in absentia of fraud and money laundering. At the center of the case was a deal signed in 1995 between automobile makers AvtoVAZ – then represented by Samara’s regional government – and LogoVAZ for the supply of passenger vehicles. An investigation concluded that LogoVAZ was supplied with 20,000 vehicles of various models, which were subsequently sold by Berezovsky.

Law enforcement agencies believe that the money made from the operation – nearly $46 million – was spent by Berezovsky for his own ends. The invoices sent by AvtoVAZ and obligations to the regional administration were never paid by LogoVAZ. At the time, the court ruled in favor of the claimant and ordered the defendants to pay $1.8 million to regional authorities.

In March 2011, regional authorities attempted to have the sum indexed in court. The court supported the application, placing the value of established damages at $29 million. Berezovsky, however, appealed against the ruling.

In August 2011, a court reduced the amount of compensation to $300,000 – a decision which the regional administration contested. The case was taken to the Simonovsky Court in Moscow. On April 4, 2012, the court ordered interest to be collected both on the amount of money that had been used and on the indexation of damages that had been fixed at the Krasnogorsk hearing – from the date the incident occurred in 1995 until the time of the first court judgment in June 2009.

“The total sum satisfying the court demands facing Boris Berezovsky and Yuly Dubov amounts to 1.1 trillion rubles. Seventy-four million rubles have been transferred to the regional government for fulfilling the terms of the contract,” the governmental press service said. The transferred funds are available to cover the costs of counsel and other legal fees.

It remains possible, however, that these funds may be insufficient to pursue the case in London’s High Court. For example, the recent dispute between Chelsea FC owner Roman Abramovich and Berezovsky – which took place in the same court – cost Abramovich $12 million dollars in legal fees, while Berezovsky’s lead lawyer, Laurence Rabinowitz, was promised a fee of $2.3 million. The combined costs of both parties ran up a further $160 million and ended up being awarded against the losing side – that is, against Berezovsky.

Berezovsky only learned of the new case against him from journalists on Sept. 24, but denied that he had charges for which to answer. “This is just more pot-stirring in London. The whole thing was resolved at arbitration, which confirmed the deals were completely legal. But bureaucrats have decided to go their own way on this. And the bill for this whole legal process will come out of taxpayer’s pockets,” said Berezovsky.

The London courts threw out Berezovsky's previous claim against Abramovich, regarding the sale of assets of a number of Russian companies that took place in the early 2000s. At the time, the newspaper Vzglyad forecasted that losing the case would prove ruinous for Berezovsky. Now the disparaged businessman is feeling the pinch, and press reports indicate that he has begun selling off his property.

Forbes suggests that Berezovsky’s assets have thinned-out rapidly over recent years. In 2008, Berezovsky was ranked 29th in the list of Russia’s Top 100 wealthiest individuals, with assets in excess of $1 billion. By 2009, Berezovsky had dropped off the list altogether – for the first time since 2004.