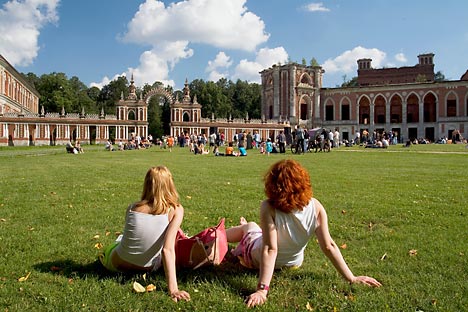 Many estates and mansions built by tsars and noble families survived the Soviet era and have been restored to their former glory.

A travel writer in 1914 described “two separate worlds” in Moscow – the estate like “a corner of paradise where all is beauty and elegance… and, beyond its boundaries, Russia – cold, grey and disorderly.” This may be unfair to Russia as a whole, but these historical estates remain idyllic corners of the city surrounded by parks and forests, lakes and orchards.

The communists nationalised all grand estates after the 1917 Revolution and many were damaged or destroyed. But, thankfully, some were given “museum status” and preserved.

Peter the Great’s father, Tsar Alexei, built a huge fairy-tale palace south of the city among the riverside ravines at Kolomenskoye in the mid-17th century. Once hailed as an eighth wonder of the world, it was later demolished, but former Moscow mayor Yuri Luzhkov, built a huge replica. On the far side of the park, a museum of wooden architecture includes a three-domed wooden church, towers and gateways.

Tsar Vasily III commissioned the soaring Church of the Ascension here in 1532, on a cliff overlooking the river, to celebrate the birth of his son, Ivan the Terrible. Pilgrims come to the hidden valleys nearby to tie votive cloths to trees near sacred springs and rocks, and tourists take boat trips or troika rides. The park has stables, gardens, ponds and the log cabin Peter the Great lived in while he supervised the building of the Russian fleet.

Peter’s obsession with boats started in another of his father’s residences on an artificial island at Izmailovo, east of the city. The original wooden palace was demolished, but its elegant gateways remain, alongside the five-domed Cathedral of the Intercession, with its ceramic peacock-eye tiles and a beautiful, red-brick bridge tower. The teenage Peter trained his troops in the grounds and learnt to sail a small boat he found in one of the barns. A nautical statue commemorates Peter’s first ship, known as the “Grandfather of the Russian Navy”.

The island, with the remains of the royal estate, is close to Moscow’s largest craft market, selling matryoshka dolls, fur hats, patchwork quilts and antique silver. The market includes its own replica kremlin (fortress) with a colourful recreation of palace and boat, as well as a museum of vodka.

Among Moscow’s surviving imperial palaces are the ruined Gothic castles at Tsaritsyno. Catherine the Great discovered the estate in 1775 on a walk and was enchanted by the series of lakes surrounded by wooded hills. The area belonged to an old prince who, as Catherine complained in a letter, “took no interest in waters, forests or majestic scenery” but spent his life playing cards. Gambling debts eventually forced him to sell the land to Catherine, and work began at once in the renamed Tsaritsyno (empress’s village). The two greatest architects of the day failed to please the Empress, however, and the palaces were unfinished 21 years later when she died.

A few years ago Luzhkov decided that these fanciful ruined follies should be rebuilt and a controversial restoration programme has provided musical fountains, grand museums and gilded ballrooms.

St Petersburg may have been the capital for most of the 18th and 19th centuries, but aristocratic families still built their grand mansions in Moscow. Peter Sheremetev, who was part of the richest family in Catherine the Great’s time, built Kuskovo in the mid-18th century. With its sweeping, sphinx-flanked stairs leading to stately rooms decorated with Flemish tapestries, crimson silk, rock crystal chandeliers and gold-wreathed mirrors, it is sometimes called Moscow’s Versailles. The gardens are dotted with statues, summerhouses – including a gabled Dutch house with Delft tiles – a Swiss chalet, an Italian villa and a grotto decorated with sparkling sand and seashells. Orangeries house ceramics museums.

One of Moscow’s most romantic liaisons began in these enchanted grounds. Count Nikolai Sheremetev fell in love with and secretly married one of his serfs, the opera singer Praskovya Kovalyova, whom he nicknamed “Pearl”. Nikolai built the opulent estate at Ostankino on the far side of town and moved there with Praskovya in 1795. The theatre, where she was prima donna, hosts concerts and operas under its spectacular painted ceilings on summer nights.

Another estate that maintains its musical traditions is Prince Yusupov’s palace at Arkhangelskoye, just west of Moscow. The theatre was built by Osip Bove, designer of the recently restored Bolshoi Theatre. The annual Usadba Jazz Festival is held in its grounds in June, and classical concerts are staged during the summer around the neoclassical mausoleum and the 17th-century church. The park’s attractions include tree tunnels and sweeping lawns, leading down to a frog-filled lake, and great views from the terrace across the old river valley.

Another aristocratic venue perfect for a stroll is the landscaped park at Kuzminki. Visitors can wander through waterside forests, past bridges, churches and statues of rearing horses. The outbuildings of the original palace house a museum of estate life and the avenue leading to the griffin-guarded gates is famous for its tulips in spring.

The area is full of charming surprises, including a wooden village which is the Moscow home of Ded Moroz (the Russian Santa) and collections of vintage cars. One more architectural gem stands by the lakes in Kuzminki Park: a colonnaded yellow building known as the Durasov Mansion, now a museum. Four wings radiating from a round central hall and, connected by a colonnade, represent the encircled St Anne’s cross. Nikolai Durasov, an eccentric nobleman, commissioned it in 1801 to commemorate his appointment to the Order of St Anne. It was a venue for balls, banquets and concerts.

This was a favourite area with 19th-century dacha dwellers, including Fyodor Dostoevsky, who came here in 1866. His niece’s record of him at that time is at odds with his reputation as a relentlessly gloomy writer. She describes him taking part in word games and amateur dramatics and says he was “the originator of all the pranks and diversions”. Today’s visitors will find plenty to lift the spirits in Moscow’s aristocratic and imperial parks and palaces.

For more information go to en.travel2moscow.com