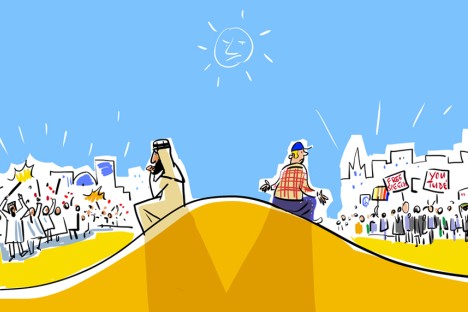 Despite the commercial and geopolitical interests that Moscow has in the Middle East, it seeks avoiding any unnecessary upheavals, not to mention conflicts between civilizations and religions.

About seven years ago, after Iraq had been liberated from Saddam Hussein by the Americans and plunged into chaos, violence and terrorism, I overheard a conversation at an international conference. An American participant from a very conservative think-tank said to a Russian colleague: “Yes, I have to admit Russian experts did a better job of calculating the consequences of invading Iraq.” The Russian, choking with surprise, replied: “Experts? In my country, any child could have told you how it would all end.”

Today we are witnessing a partial repeat of those events. When the Arab Spring began two years ago, many Russians did not know what to make of Western discussion on this topic. Fans of conspiracy theories came up with ingenious explanations for what was happening. For most, it was beyond belief that the West could seriously expect the Arab political awakening to take a similar course to that of the “velvet revolutions” that took place in Eastern Europe in 1989. Most Russian experts knew that democracy in the Middle East, if it took root, would have an anti-Israeli and anti-Western tone. And that the main beneficiaries of the collapse of secular authoritarian regimes would be Islamists of various degrees of militancy.

People often recall the experience of Afghanistan in the Eighties, when the United States helped the mujahideen in the struggle against the Soviet Union. This group was to give rise to al-Qaeda, which would eventually turn its weapons against its patrons. The parallel works only up to a point. In Afghanistan, it was a conscious decision, since causing damage to the Soviets and to communism was such priority that the cost was irrelevant. Besides, it was hard to foresee how much Islam would strengthen its political position once the former ideological model of confrontation was gone.

Today there are no illusions as to the overall trend: Anti-Americanism in the Arab and Muslim world is universal, especially among the masses and the seeds of cultural and religious confrontation sown in the early 2000s by George Bush’s counter-terrorist campaign have started to sprout. Radical Islamists see the pastor Terry Jones publicly burn the Koran and revel in the fruits of his action, while enjoying impunity thanks to the First Amendment.

The point is that supporting revolutions in the Arab East is not a conscious or considered choice of America and Europe; it is an attempt to adjust to the onslaught of events plus the “gut” fear of finding themselves to be “on the wrong side of history.”

The result is total confusion. In Libya and Syria (and in Egypt and Yemen as well) the West sides with those who sympathized with the 9/11 terrorists, and sometimes were their accomplices. These countries feel no gratitude towards the West for helping them overthrow their tyrants and continue to fight their usual enemies, the U.S. and Israel. All the more so because America and Europe have enough extremists of their own who think mocking the Prophet Mohammed is not idiotic provocation, but a way of asserting liberal values. Things come full circle.

In a recent interview with the television channel Russia Today, Vladimir Putin, criticizing the West over the Syrian conflict, said: “In that case, they might as well open the gates of Guantanamo and unleash all its prisoners against Syria. At the end of the day, this is the same thing.” The Russian president’s trademark sarcasm is there, but one cannot deny the underlying logic. It is already impossible to understand who is fighting whom and who is on whose side.

Incidentally, reacting to the murder of the US ambassador in Benghazi, Putin refrained from gleeful “we told you so” remarks, but noted first, the need to co-operate in the fight against extremism and, second, the need to be considerate of religious feelings. For Russia, a multinational and multifaith country, the issue has practical implications.

The attitude to the Arab Spring, especially the episodes that clearly involve an external factor (Libya and Syria) stems from the awareness of the dangers of upsetting the fragile balance. Moscow’s position supporting the official leaders in Damascus often raises eyebrows (why cling to a doomed dictator?) and is not shared by many Russian Muslims (who wonder why Russia has quarreled with the whole Arab world over Assad).

But one fundamental principle is hard to deny, particularly in light of recent events. External interference in acute social conflicts on one side cannot yield a positive result. It usually aggravates the situation and makes those who interfere hostages to that situation.

Russia has only one “advantage”: if the worst comes to the worst, it can simply tiptoe out of the Middle East. That would be unpleasant and humiliating, especially if one remembers the role the Soviet Union played there only a couple of decades ago. But it would not be disastrous for Moscow, because it does not claim to be a global superpower and is increasingly concentrating on the regional space, which spans the whole of Eurasia. Neither America, which is keen to remain the world leader, nor Europe, which is right next door to Middle East, can afford to leave that explosive region. But they do not know what to do there.

Democracy has always been thought of as a form of government that automatically ensures a state’s pro-Western orientation. If the democratic mechanisms for the change of power that the majority of Muslims support are invested with different values (ones that are neither sympathetic to the West, nor neoliberal), then that creates a very unusual situation.

Russia’s position is simple: amid growing uncertainty, any kind of intervention, no matter how it is justified, is fraught with complications. Regardless of the commercial and geopolitical interests that Moscow has in the Middle East, it wants to avoid any unnecessary upheavals, not to mention conflicts between civilizations and religions. To this end, it is ready to co-operate with all reasonable forces that are guided not by ideological dogmas, traditionalist or liberal, but by a sense of self-preservation.

Fyodor Lukyanov is editor-in-chief of Russia in Global Affairs magazine.