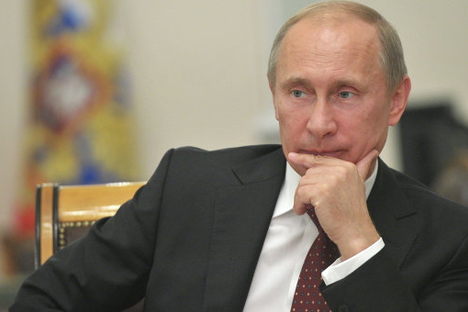 Pakistan Foreign Office gives no reason for cancellation, says new dates will be worked out.

Russian President Vladimir Putin has called off his visit to Pakistan, a spokesman for Pakistan’s Foreign Office said in a statement on Thursday. “New summit dates will be worked out after seeking convenience of the respective leaders through diplomatic channels,” according to the statement.

The Pakistan Foreign Office said Putin send Pakistani President Asif Ali Zardari a letter expressing eagerness to develop better bilateral relations. “I am confident that in future we shall be able to find opportunities for arranging our personal meeting. We shall always be happy to receive you in Russia”, the Pakistan Foreign Office cited Putin as saying in the letter.

While both countries maintained that Putin was going ahead with the trip until yesterday, there was speculation in the Pakistan media that the visit was not a certainty. Last week, The Pakistan Observer reported that the Russian president’s visit was unlikely. “Very short time left now, and there seems little likelihood of his being here,” the paper cited an unnamed diplomatic source as saying during a film screening of Leo Tolstoy’s “War and Peace” arranged by the Russian Consul General in Karachi.

No official reason was given for the cancellation of the visit. However two sources close to the situation told RIR that the Russian president decided to put off the visit since Pakistan refused to award a lucrative contract to Gazprom to build a gas pipeline from Iran to Pakistan. Gazprom had been eager to construct the pipeline from the time the original plan included piping gas to India from Iran via Pakistan.

Senior Gazprom officials visited Pakistan recently as part of a business delegation to present their case to construct the pipeline. Pakistan had insisted on a bidding process, to award the pipeline contract, the sources said.

The Pakistan Foreign Office maintains that the visit has not be cancelled but just postponed with the two sides planning to reschedule.