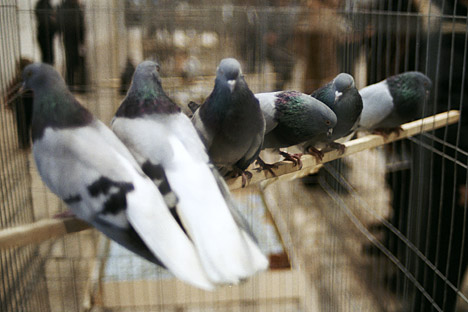 Doves were a symbol of Moscow in the mid-20th century, as promoted by the Sixth World Festival of Youth and Students in 1957. Source: RIA Novosti / Valery Shustov

Muscovite Georgy Grigoryan owns a piece of land outside of town on which he raises pigeons and doves — he now has more than 800 birds. In the near future, he intends to petition the Moscow authorities to install dovecotes in municipal parks and courtyards around the city.

“I was about ten when my big brother brought home a bag with something alive inside. I thought that it was a puppy, but there was a dove in it,” Grigoryan said. He used to live in central Moscow, where he and his brother built a small dovecote in the yard to house the bird. When they had to move, the brothers temporarily gave their birds to a pigeon breeder who lived outside of town.

Three years ago, when his family bought a plot of land in the country, the first thing Georgy did was build a dovecote. “We took our doves back, about 30 of them. But they breed fast, and we bought new breeds,” said Grigoryan.

Georgy is a soon-to-be architect who also owns a construction business. His dovecote is located in the Gorki-8 summer community in Rublyovka. The clean shed with perches is home to about 800 birds of various breeds and colors. According to Georgy, pigeon breeding as a serious hobby is quite expensive. His birds eat four bags of grain every week, and he spends a good deal of money on medications, vitamins and veterinary checkups. Georgy says that many experienced breeders sell young doves and pigeons to feed the old ones: a purebred bird is worth 1,000-3,000 rubles ($30-100) in Moscow.

Georgy goes to his summerhouse a few times a week, but his neighbor Nikolai takes care of the birds when he is not around. Georgy has given Nikolai around 100 birds, out of appreciation for his services. The two neighbors often compete to see whose birds can fly farther. Their “athletes” are all on a special diet and cannot be overfed.

Doves were a symbol of Moscow in the mid-20th century, as promoted by the Sixth World Festival of Youth and Students in 1957. Soviet leadership wanted the youth to remember Moscow as a city of peace and, so, requested the release of an entire flock of white doves into the air for the festival. However, organizers were taken by surprise when they learned that there were not enough pigeons in Moscow to pull the feat off. Afterwards, authorities gave the go-ahead for dove breeding in the city. Through those efforts, the population of doves in Moscow reached 35,000 in one year. Muscovites have since lost their passion for doves, but Russians still have favorable associations with the bird, owing to the popular film "Love and Doves".

Like many breeders, Grigoryan enthusiastically enjoys showing off how talented his pets are. He clambers into the dovecote, opens the lid in the ceiling, and the birds rush out. Georgy whistles, swinging a mop in his hands, and the birds whirl up high in the sky. Nearly all of Georgy’s birds are tumblers, or rollers: This group includes breeds that tumble in the air, perform somersaults and “ride” on their tails.

The pigeon breeder says that each member of his family has a favorite breed. His mother Emma loves the white Takla dove, which never goes inside until the rest of the group is back. Georgy’s favorite belongs to a family that is peculiar for the color of its body and its cheeks — it has a white body, a black head and shaggy legs. “I like ‘booted’ doves more. Also, my favorite flies beautifully. And he is lucky — he has escaped falcons several times. It seems that we have similar characters,” Grigoryan said.

He complains that “most of the Moscow dovecotes are old, made of metal and date back to Soviet times.” They are also frequently demolished to build new parking lots. Georgy believes that it would be nice to build new dovecotes – possibly in the Russian-Byzantine style – in parks and courtyards, to make it possible for Moscow pigeon breeders to take care of the birds that they love so much.

Where have all the dovecotes gone?

Mikhail Korzhikov, chief referee at the “Dove of Peace” club of pigeon breeders, says that it has always been hard to obtain clearance for the construction of dovecotes in Moscow, because the authorities thought that these would be used as places for drinking. In July 2012, Mayor Sergei Sobyanin suggested simplifying procedures for providing land for dovecotes and issuing construction authorizations free of charge. However, according to Korzhikov, there is simply often no place in Moscow to place a new dovecote. “There was a situation when a dovecote had to be demolished because of an infill construction project. The local authorities were happy to give us another spot, but there was no other free piece of land in the area.”