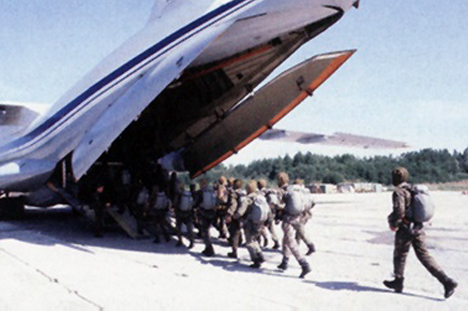 The military is not the only one waiting for the new aircraft: the Il-76MD-90A must also be supplied to civil airlines performing cargo transportation all over the world. Source: Press Photo

Emboldened by the successful export of the Su-30 MKI fighter aircraft, the Russian Air Force gave the green signal for the testing of the Sukhoi Su-30 SM at the Irkutsk aircraft factory’s airfield in Siberia. Several thousand kilometres to the West, in the city of Ulyanovsk, the Ilyushin Il-76 MD-90A made its first flight. This is the first Russian made Ilyushin Il-76 aircraft and a significantly more modernised version in comparison to its Soviet predecessors.

The Sukhoi Su-30SM is another project designed to support the combat readiness of the Russian Air Force in anticipation of the production of the T-50 fifth-generation fighter. Considering the fact that the average age of the fighters on the T-10 platform (Sukhoi Su-27) is approaching 30 years, it is necessary to do something with this ageing fleet right now.

The renewal of the Sukhoi fleet can be divided into three stages. The first stage, which started in the mid-2000s, included an overhaul combined with the modernisation of several dozen Sukhoi Su-27 fighters in order to get the Su-27SM version. The upgraded aircrafts have been enabled to use modern high-precision “air-to-surface” weapons and improved “air-to-air” missiles.

The second stage began in 2009, when contracts for the supply of new fighter aircrafts of this project were concluded. The newly-built Su-27SМ3 and Su-30M2 became the first swallows that updated the fleet of the air base in Krymsk, in the south of Russia. Finally, today, in the third stage, supplies for the most advanced representatives of the T-10 family are being launched - the Sukhoi Su-35S as part of the 2009 contract, and the Sukhoi Su-30SM as part of the 2012 contract.

More than 120 of these fighters, together with the previously supplied new and modernised aircrafts, will make it possible to replace the oldest Soviet made Su-27 and live to see the supply of T-50s avoid serious failures.

Fighters are very popular, but the role of military-transport aircrafts in ensuring the country's defences is also significant. In this context, the first flight of the upgraded Ilyushin Il-76, which production has recently been moved from Tashkent to Ulyanovsk at great cost and with great difficulties, is none the less important.

In addition, the military is not the only one waiting for the new aircraft: the Il-76MD-90A must also be supplied to civil airlines performing cargo transportation all over the world.

However, the project has raised a lot of questions, for instance: Is it reasonable to spend billions of dollars on resuming the production of aircrafts designed 40 years ago? Some experts agree that the programme of capital repair and re-motorisation of the Ilyushin Il-76 with the modernized D-30KP Burlak engines would be more justified. In this case, the saved money could be assigned to either accelerating the implementation of the An-70 project, or to developing a new heavy aircraft on the basis of, say, the Il-106 pilot project. This project, whose main characteristics are similar to the American C-17 Globemaster aircraft, could go into mass production and radically renew the transport air fleet by 2020, if only its detailed elaboration would have begun in the mid-2000s.

However, the leadership of the Air Force and aircraft industry has obviously decided not to choose a pie in the sky, preferring “a bird in the hand” in the form of restarting the production of the modernised Il-76. Time will tell whether this step is justified.