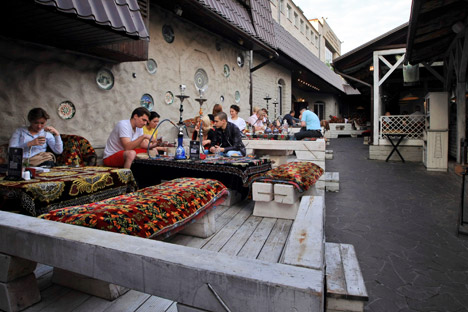 Thanks to the cultural influence of immigrants from the former Soviet republics, for example Uzbekistan or Turkmenistan, you can enjoy delicious food, such as lagman and plov. Source: Mikhail Fomichev / RIA Novosti

Are you starving in Russia? Then you are really doing something wrong. Especially in the metropolis of Moscow, you will find the most interesting places to eat out, including top cuisine from all over the world.

Whether you are in the mood for juicy steak from Argentina, spicy Tofu Szechuan, Indian lamb curry, Ethiopian delicacies, fatty Bavarian sausages, or just simply burgers – Moscow has it. Indulge in this city of gourmets and get the taste of a melting pot of world cuisine.

What can expats really miss in Moscow? I would guess not the food from their native countries. Moscow has any cuisine imaginable - compare it to New York, London or any other big capital with intercultural influence. In Moscow you can find simply anything you crave for, if you look carefully. Thanks to the cultural influence of immigrants from the former Soviet republics, for example Uzbekistan or Turkmenistan, you can enjoy delicious Lagman (Uzbek noodle soup with lamb) or Plov (lamb base rice dish, something like Uzbek paella). I can recommend the restaurant chain “Chaikhona no. 1” for that kind of food. For typical Georgian food we like to hit a super-seedy but just cool looking mini-café next to Savelovsky train station. The Khinkalny (Georgian dumplings with meat, cheese or both) are super-delicious with a shot of vodka.

Asian food fan? I don’t even want to start talking about Sushi. Sushi is everywhere, even in coffee houses (yes, imagine a good old Cappuccino with some nice Salmon Makis – yummy), supermarkets and for sure where you will never expect them. Russians just love Sushi. But look for the places where the Japanese business people gather, those places are usually special. Check out, for example, Tsvetnoy Sakura and watch what smoking Japanese business guys have on their tables.

If my Chinese roots start craving the taste of spicy tofu, then the restaurant “Druzhba” does the trick. Full of Chinese businessmen, this place gives a taste of China, including sometimes questionable hygiene in the restaurant, but let’s just call this “atmosphere.”

This summer I traveled to South America and the American Midwest, but really for good steaks I don’t have to travel that far. Great places in Moscow include Goodman’s, Chicago Prime or Beef & Reef.
For emergencies we also have a great Indian standby, “Aromass,”  about five minutes from our house – they even deliver!

Much to the satisfaction (or chagrin) of American expats, Russia was not spared the invasion of American-style fast food. Thanks to some courageous investors, American-style breakfast and burgers came to Moscow in the 1990s and are served 24 hours in all locations of the Starlite restaurant chain. Burgers here I have to admit are better than their big brothers in the U.S. Less greasy and the breakfast is not covered in gravy – thank God for that!

Want to have a Disneyland-kind feeling? Try Beverly Hills Diner, this is a playground of American kitsch interior and every hour the waiters will perform a dance show for you (so do not wonder if you wait forever for your food). All major burger joints are here, McDonalds, Burger King and yes, also Wendy’s, a special memory for my boyfriend, who grew up where Wendy was born – Ohio.

Speaking of my boyfriend who – Russian-born but American-raised - developed over those years a fine palate for Mexican fast food burritos, had until recently a reason to frequently fly to the U.S., driving up to Chipotle Mexican Grill the second he landed. But then we discovered the brightly colored announcement of the arrival of Moe’s Mexican Grill and picked up a flyer from another recently import from the U.S. – Muchachos.

Sure we had to try them both immediately – being quite impressed. At Moe’s especially I felt instantly Americanized. Hardly through the door, a loud “Welcome to Moeeeeee’s” greeting startled me right away, followed by a glance through the very American-looking interior. Am I in the States? I nearly thought so, especially after I heard about five people speaking in perfect American English, who I later found out were the directors attending the first day of the restaurant’s grand opening in Moscow. The only thing that brought me back to Russia was the slightly jolty attempt to smile by the guys behind the buffet.

Customer service is still a challenge here (I know it too well), so I just couldn’t leave without asking the directors about their opinion on how to get friendly staff in Russia. “We make them smile,” said the director from Georgia, and I sensed a little wishful thinking in his voice. Full of free nachos and tacos, we left Moe’s, while the director keeps staring at his employees, whose smiles are more like grimaces, training then in the American supersmile.