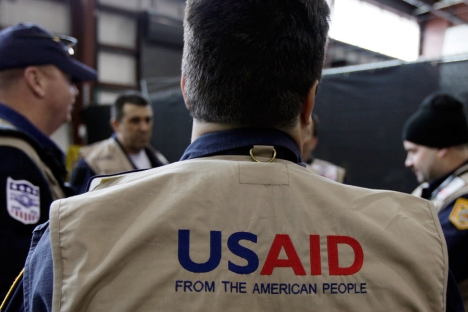 However, in spite of the final decision taken by the Russian government to close the USAID operations, Washington has expressed the hope that it does not mean the end to the ongoing “reset” of relations between the two countries. Source: AP

According to many experts, it is not yet clear what the closure of USAID in Russia means for Obama’s efforts to “reset” in Russia-U.S. relations.

While Barack Obama’s administration weighs various options to recover the space of activities after the closure of USAID (the United States Agency for International  Development) in Russia on October 1, Moscow is looking ahead to further tighten the screws over the opposition when a new law on “foreign agents” come into force. The new law is likely to trigger even more vociferous anti-Kremlin street protests, in view of the coming regional elections scheduled to be held in mid-October.

The Russian Government has given the U.S. until October 1, to close the activities of the USAID, accusing it of continuously meddling in the country’s internal politics and funding the opposition. Russia’s order to cease the  mission’s activities and leave the country, comes in the wake of  a new round of crackdown on the anti-Kremlin pro-democracy groups, which recently re-launched their protest demonstrations in the Russian capital.

“The decision was taken mainly because the work of the Agency’s officials far from always responded to the stated goals of development and humanitarian cooperation,” Russian Foreign Ministry said in a statement on October 20. “We are talking about attempts to influence political processes through its grants, during elections of various levels and civil society institutions” it added.

“Serious questions arose over the activities of USAID, in Russian regions, in particular, in the North Caucasus, about what we have warned repeatedly our U.S. colleagues,” the statement noted.

USAID has been carrying out its operations in Russia since after the collapse of the Soviet Union. During its more than two decades of activities in the country, it spent about $2.7 billion on aid to social, democratic, health and environmental programmes. The Agency was due to spend around $50 million on its work, this year.

Since the December parliamentary elections and re-election of Vladimir Putin for his third term of presidency, in March this year, the Russian authorities  have repeatedly openly declared that they have become alarmingly suspicious of the activities of the NGOs (non-governmental organisations), in the country, accusing them of  using foreign funds to provoke political unrest by the opposition.

Even President Putin alleged earlier this year that protest demonstrations during his re-election were orchestrated by NGOS funded by the US.

“We showed that no one can impose anything on us - no one, nothing! We showed that our people can distinguish between the desire for renewal and political provocation that has but one goal:  to destroy Russia’s statehood and usurp power,” Putin said in his victory speech in Moscow on election night in March, pointing to the foreign attempt to influence the presidential election. Putin’s accusation came after he blamed the U.S. Secretary of State Hillary Clinton in December for giving a “signal” to the Russian people protesting his rule to turn out for street protests.

The Kremlin claimed that law was needed to protect Russia from foreign attempts to influence internal politics. The ruling United Russia party, which sponsored the law, accused the foreign governments of using the NGOs in Russia, as cover to bring about political change.

Since Putin’s re-election as President,  the State Duma, the lower house of Russian parliament, has nodded to several laws that Russian human rights activists claim are intended to suppress dissent and provoke fear among people who have become increasingly active in recent months.

Washington already expressed “deep concern” about the law on “foreign agents,” but Moscow promptly condemned it blaming the US for “gross interference” in Russia’s internal affairs.

The booting out of the USAID, is likely to affect the work of many NGOs, including the leading election monitoring organization Golos (Voice), the Moscow Helsinki Human Rights Group, Russian human rights organizations Memorial and For Human Rights, all of which have criticised Russia’s decision to close the U.S. mission. The move allegedly cuts a crucial funding source for them as the Agency provides substantial funding to 57 different Russian human rights organisations.

“This is a very bad signal. They have done a lot for Russian society, for the support of independent journalism in Russia,” the head of the Golos, Lilia Shibanova said, in a lamenting comment on the decision of the Russian Government.

However, in spite of the final decision taken by the Russian government to close the USAID operations, Washington has expressed the hope that it does not mean the end to the ongoing  “reset” of relations between the two countries.

“This is always a sovereign nation’s decision whether they want our assistance. That said, as you know, when we talk about the reset, we talk primarily about global and regional foreign policy issues on which we work together,” U.S. State Department spokeswoman Victoria Nuland told  a press conference, announcing the closure of Agency’s operations in Russia.

At the same time, Nuland also said that in the categories of global and regional policy issues, the U.S. has been very clear about what it sees as the benefits of the” reset”: “The new START Treaty, obviously; the work we are doing together in the P5 plus one on Iran,: the work we have done on the DPRK; other – the work we have done to be able to support Afghan security forces, peace and stability in Afghanistan. Those things obviously continue.”

“But we have also always said that the reset would give us an opportunity not only to cooperate wherever we could, but also to be clear when we have concerns and when we disagree,” she stressed, pointing out “We are extremely proud of what USAID has accomplished in Russia over the past two decades.

According to many experts, as far as the new development is concerned, it is not yet clear what it means for Obama’s efforts to “reset” in Russia-U.S. relations.

This despite the fact that as a result of the “reset,” the economic ties between the two countries have improved, in the form of significant investments by ExxonMobil, and Cisco Systems and security cooperation on issues such as Afghanistan. The “reset” also yielded a simplified visa regime recently.

However, Putin and Obama do not have similar views on democratic values, with Russia rather more concerned about the U.S. interference in the country’s internal politics, inciting pro-democracy opposition groups for street protests and destabilising the political situation through providing funds to NGOs.

Some political analysts said, the new move by Russia, may also force sharp tit-for-tat actions from the U.S. Congress, disrupting the “reset” in bilateral relations. The U.S. lawmakers may seek to pass the Magnitsky Act to punish Russian officials accused of human rights abuses.

It may also complicate Obama’s efforts to convince the lawmakers to scrap the Soviet-era trade restriction known as the Jackson-Vanik amendment.

On Thursday, Russian Foreign Minister Sergei Lavrov, strongly warned that the passing of the Magnitsky bill by the U.S. Congress, would have disastrous consequences for Russia-U.S. relations.

During an interview with US television talk-show host Charlie Rose, Lavrov said Moscow supported a dialogue on human rights with Washington but did not want to be “lectured” or “judged” through efforts like the Magnitsky bill.

“This would be certainly something which will be detrimental to our relationship,” Lavrov said.

Russian business daily Kommersant reported on September 20 that the head of one of NGOs told the paper that the U.S. intends to continue funding programmes of 3-4 organisations in Russia,  but the format of funding is unclear yet. The U.S. will continue to support Golos, Memorial, and the Moscow Helsinki Group, he said.

The U.S. has asked the deadline for the closure of the operations of the Agency to be postponed. “The U.S. Secretary of State Hillary Clinton sent a letter to Lavrov, requesting Russian authorities to postpone the final term of operation for USAID until May 2013,” the paper said. The Russian Government confirmed that they had received a letter, but refused to disclose its contents.

After all, as things stand today, it seems that no question about the future U.S. financing of NGOs in Russia, is likely to be decided until after the American presidential election in November.

According the American media reports, the closure of USAID, which has been working in Russia since 1992, will not leave Russian NGOs without American aid. Washington may also choose a third-party organisation as an option to provide fundings to the NGOs.

“We have at least 20 missions around the world where we support civil society without having an USAID mission, per say,” Nuland said. “Whether we do this directly to our assistance partners, whether we do it through international organisations, through foundations, we are going to continue to support the development of a strong civil society in Russia.”