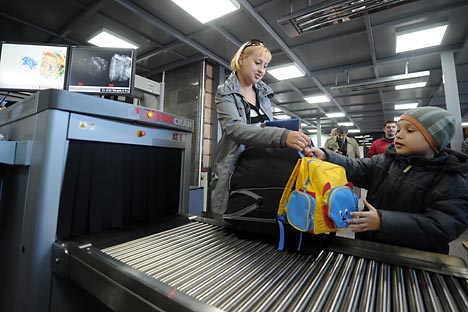 Russian scientists have developed a device that can analyze the composition of a substance through its container. The portable device can determine the properties of any substance, as long as the substance is in a transparent container. The phenomenon around which the technology is built was discovered in the mid-20th century by Indian researcher Chandrasekhara Venkata Raman, who won a Nobel Prize in Physics for his findings.

Aleksei Steblyov, vice president of the developer Enhanced Spectrometry, explains that the device’s technology is based on Raman’s observation that every substance reflects light in a unique way. The device emits a laser beam to the substance, analyzes how the beam is reflected and determines the exact composition of the substance. The entire process takes one to three seconds. “By collecting scatter information – that is, the difference between the way light went in and the way it returned – we can observe a certain spectrum for the substance. This spectrum is unique, like a fingerprint,” Steblyov said.

The project, which was originally financed by researchers, eventually secured a 30-million-ruble ($960,000) grant from the Skolkovo Foundation and attracted an additional 10 million rubles ($320,000) in third-party investments.

The unique device has caught the attention of several sectors, including customs control, counterfeit detection and security enforcement. “The security option has especially excited foreign specialists. The new Russian-made spectrometer made a strong impression at the Las Vegas International Conference on Security. First, it has a very appealing price – its foreign counterparts are more expensive. Second, its size – spectrometers are normally quite bulky devices, while this one fits in an ordinary case,” said RBC analyst Timofey Shatskikh.

Contracts for the device have been made with individuals and companies from 14 countries already. In Russia, the new device has been ordered exclusively by customs houses and museums. “We often send valuable exhibits to foreign expos,” said a staff member at the Bakhrushin Museum. “In order to make sure they are safe, we had a special substance developed for us. Before dispatching the paintings, we apply this substance to them and then read the data with a laser scanner when they are brought back. We thus safeguard the museum against the replacement of the originals.”

The new device is so simple and portable, that all kinds of businesses and consumers could easily find a use for it. “The device has laptop, iPad and smartphone connectivity. It weighs two pounds without the display and can be held in one hand. There is literally one button to push,” said Igor Kukushkin of the Russian Academy of Sciences. “The user has to place an item under the laser beam – be it a diamond, an apple, medication or water. As soon as the item is under the ray, you push the Enter button and see the results on the display – the name of the substance, its chemical and structural formulas.”

Experts are certain that the spectrometer will come to enjoy an even wider demand in Russia, beyond museums and security enforcement. The device’s simplicity is, so far, its most important advantage and its biggest selling point.