A shortfall by Obama’s own standard 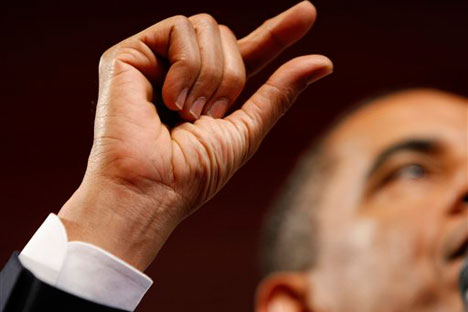 A shortfall by Obama’s own standard. Source: Press Photo

If his Cairo speech of June 2009 stands out as his finest hour in the Muslim Middle East, Obama’s 2012 UN speech amounts to a lame excuse for the road not taken.

President Barack Obama’s address to the United Nations General Assembly last Tuesday was widely expected to focus on the Middle East question and the United States’ role and policies toward that region.

True, something like 85 percent of Obama’s UN speech was devoted to the Middle East, but in the event, his speech turned out to be a damp squib. Obama chose to exploit the UN podium primarily to do some grandstanding in his noisy re-election bid in November.

Many markedly took exception – such as, notably, Egypt’s President Mohamed Morsi. The stunning thing about Obama’s speech is that it leaves the impression that the U.S. has nothing to offer by way of a leadership role in the Middle East. The U.S. seems to have given up even the pretence of leading from behind on the burning issues raised by the upheaval in the Middle East.

The UN speech was an appropriate occasion to evaluate the Obama presidency’s score sheet in tackling the Middle Eastern issues. The president had set a benchmark for himself in his famous speech at the Cairo University in 2009. It was a magnificent speech, which caught the imagination of the Middle East for its honesty and integrity, its rare “confessions”, its overflowing humanism, its high sensitivity and feeling of compassion, and of course the noble promises it held out to the effect that America would make amends for past injuries and humiliations it inflicted on the Muslim Middle East.

This is a defining moment when Obama could have estimated how he performed in the period since that Cairo speech in redeeming the pledges he made. Yet, the politician in him instinctively took over and he preferred to spin an entire speech around the tragic murder of an American diplomat by name Chris Stevens. The rich tribute that Obama paid to the departed diplomat was probably very well deserved but we would have liked to hear a frank account of what Stevens actually achieved ever since he “arrived” in Benghazi on a cargo ship.

By the way, did he hold a valid visa while landing on the soil of a sovereign country, which was a member of the U.S., on a diplomatic mission? It is a troubling question. The point is, no matter the spin that Washington puts on Stevens’ mission, it was a covert operation from Smiley’s world to overthrow an established, legitimate government in gross violation of international law. Alas, Obama took recourse to obfuscation by portraying Stevens as a blend of Marquis de Lafayette and Mother Theresa.

What is the Libya that Stevens ultimately “crafted”? Obama sidesteps the question. That is the heart of the matter – and not that Stevens “loved his work” or “took pride in the country he served” or even that he “walked the streets where he worked”, “tasting the local food, meeting as many people as he could, speaking Arabic, listening with a broad smile.” All those were good professional qualities for a serving career diplomat, but we need to introspect what sort of Libya has been created by the U.S. and its NATO allies through the blood-soaked regime change and why is it that the “Libyan revolution” finally came back to reclaim Stevens’ precious life.

Libya also happens to be today the Obama administration’s most celebrated foreign-policy legacy in the Arab Spring. A street vendor led the revolution in Tunisia and the revolt on Tahrir Square overthrew Hosni Mubarak, but the violent regime change Libya was purely the handiwork of America and its NATO allies. The chaos that is Libya today, therefore, where armed groups roam around and where Salafism has reared its head for the first time in living memory, which is today a notorious staging ground for jihadis to set sail to the Eastern Mediterranean for new adventures in Syria – these are all America’s legacy. And indeed Stevens’ death, too, becomes part of that legacy. Do not ask who is responsible for that tragic murder, but look inward; it is self-evident.

The point is, Obama’s Cairo speech had offered an entirely different form of engagement of the Muslim Middle East by the U.S. and the western world than what the grotesque military intervention in Libya proved to be. It was to have been an engagement of the mind and the heart, a communion of cultures and an act of humanism.

The funny part is that nonetheless, Obama blithely claimed credit for the current “season of progress” in the Middle East. Of course, Middle Eastern people are “making their voice heard, insisting on their innate dignity, and the right to determine their future.” But the U.S. would only hear those cadences it wants to hear. Around 100000 Shi’ites took part in a protest in Bahrain’s capital Manama this week, seeking empowerment. But the U.S. would not hear their voice because of the U.S. Navy’s Fifth Fleet anchored in that country. Instead, Washington prefers to create new, violent cadences in Syria and is fine-tuning the moment when another Stephens who speaks Arabic and loves Arabian cuisine and music should be put on a cargo ship to be deputed to “arrive” at the eastern Mediterranean port of Latakia.

Obama is a gifted speaker but the Middle East simply cannot accept his explanation that the American anti-Islam film is a matter of the “right to practice free speech.” Obama’s grand promise that he will defend the right of the Middle Easterner to say “awful things” about the U.S. is neither here nor there. It is an evasive posturing. Acts, which wound the religious sentiments of peoples belonging to other cultures, cannot be allowed in a civilized world. The U.S. knows how to stop such acts, because it never allows its vital interests to be trampled on the pretext of free speech, as Julian Assange has rightly pointed out the day after Obama spoke.

Why is it that the Middle East explodes into “mindless” anti-American violence? Obama acknowledges that it is the “politics of anger”, an “impulse towards intolerance and violence… focused on the West.” But why is it happening? It has everything to do with the West’s policies of interference in the Middle East and of regional hegemony. Yet, Obama had hardly anything to say about the Palestine issue, which is the root cause of the Middle East’s tensions. In a clutch of 12 words, he stated what the U.S. could do in solving the Palestine problem – “America will walk alongside all who are prepared to make that journey.” Period.

Again, the two paragraphs each that he devoted to Syria and Iran make it abundantly clear that Stevens’ death is not going to prompt any course correction in Washington’s policies in the Middle East. Obama pledged to continue with his work for forcing regime change in Syria and there is no turning back. As regards Iran, the promise of engagement of Iran that he made at Cairo and the pledge he made never again to interfere in Iran’s internal affairs have vanished.

If his Cairo speech of June 4, 2009 stands out as his finest hour in the Muslim Middle East, Obama’s UN speech amounts to a lame excuse for the road not taken. Hardly 5 months into his presidency in 2009 Obama recognized the necessity of friendship with the Muslim Middle East. He candidly acknowledged the difficulties of establishing friendship across cultural boundaries, especially after grave mistakes had been made – and he cited the CIA plot against the democratically elected government of Mohammad Mosaddegh in 1953. But then, he is ending his presidency on an ambiguous note.

Tragically, Obama failed by his own yardstick. His presidency began with a magical picnic in Cairo and it is ending with a breakdown of communication in Benghazi.