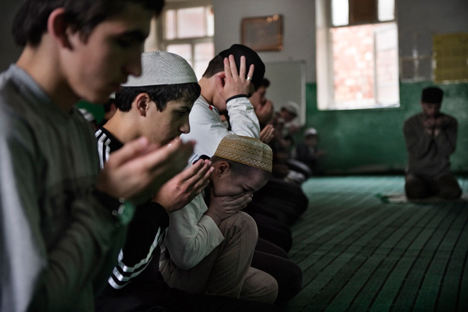 The official pretext is that 'Innocence of Muslims' is “extremist” – a punishable offence under Russian law. Source: Anna Nemtsova

Instead of searching for what could unite it, the country is now in danger of splitting along not only political, but also religious, lines.

Russia has passed an important milestone in what can now be termed its own “culture war”. On Friday, reports emerged that a court in the Chechen capital Grozny declared the broadcasting and distribution of the controversial “Innocence of Muslims” video illegal. Once in force, under Russian law, this ruling will cover the entire country.

This could well be the first official act of religious censorship in post-Communist Russian history. The consequences of this action are unpredictable and very possibly dangerous. The official pretext is that the film is “extremist” – a punishable offence under Russian law. However the clause in question, written as a safeguard against Islamist terrorists, Nazi skinheads and their ilk, has now become a universal tool used to suppress dissent and limit civil liberties.

First, by letting a Chechen court take the lead, the Russian government confirmed that Chechnya is a semi-official enforcer of Islamic orthodoxy across Russia. Stories of the selective but persistent application of Shariah law by the Chechen authorities (such as forcing women to wear headscarves and banning sale of alcohol) have been circulating for quite some time. However this is the first time that the Russian media will have little option but to cave in to what is no doubt a Shariah-motivated judgement.

Second, the ruling places a question mark over freedoms guaranteed by the Russian Constitution and international human rights to which Russia has signed up: freedom of information and artistic expression. This also follows in the wake of the State Duma initiative to amend the penal code to include punishment for “offending the feelings of believers” – an all-encompassing and vague term that no one intends to define. In turn, this Duma initiative grew out of the scandalous and controversial Pussy Riot ‘blasphemy’ trial this summer. Taken together, these developments mean that religious belief is now de facto off limits as far as criticism is concerned in Russia.

Third, this means that there new splits have been created in Russian society – between believers and non-believers, but also between the followers of different faiths who will be watching out for signs of offensiveness in Christian missionary books, the Imams’ Friday sermons or the rabbis’ Sabbath talks.

Religious revival in Russia is a recent phenomenon and what is singularly lacking is a tradition of reasoned discourse and coexistence between believers, agnostics, and atheists. For many Russians, Christianity, Islam or (increasingly) militant secularism are not causes to be argued but imperatives to be implemented in real life at any cost.

Religious beliefs are seen as a substitute for the communist ideal that collapsed, but also for the common civic identity that is manifestly lacking in Russia. In such a climate, mutual suspicion can only grow and tensions between different communities increase.

For example, although Muslim clerics sided with Russian Orthodox Church in demanding Pussy Riot receive strict punishment for their blasphemy, the Church views growing numbers of Muslims and their active proselytizing warily. Although they may be partners in one cause – they could still be bitter rivals in others.

This situation suits the Kremlin well, as it then is left in the enviable position of ultimate arbiter in any spiritual disputes that touch a raw nerve with the general public just when the authorities’ reputation is in decline.

Most opponents of Vladimir Putin’s government stress their adherence to upholding basic constitutional norms and liberties. In this new atmosphere it will be easier for the authorities to portray supporters of the opposition as radical atheists whose idea of politics is dancing in the churches wearing coloured balaclavas.

This latest development, centring on a Chechen court, casts a gloomy shadow over the future of Russian society. Instead of searching for what could unite it, the country is now in danger of splitting along not only political, but also religious, lines. Anyone in need of proof that stability in Russia is ephemeral should look no further.