In the East, a bride is waiting 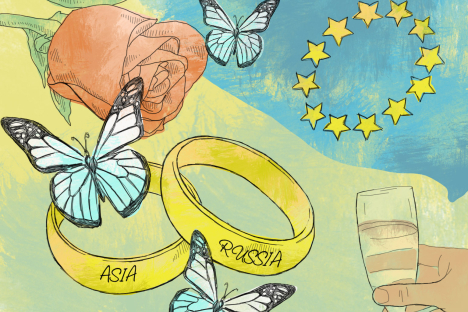 Some Russian pundits argue that the East, with its vast markets, booming economies and free competition, looks more attractive and dynamic than the West with its artificial trade barriers and economic instability.

Before the APEC summit in Vladivostok, Russia’s first deputy Prime Minister Igor Shuvalov said: “Russia already has a ‘European foot’ and now it needs an ‘Asian foot’ for stability”. Later, addressing the business session of the meeting, he again formulated Moscow’s goal in the Asia-Pacific region: to make sure trade with APEC countries exceeds Russia’s trade with Europe. The meeting of the representatives of leading economies in Vladivostok could be a milestone on the way to solving that task.

In formal terms that goal has not been reached. The few documents signed were not connected with the summit’s main program. They were signed “on the fringes”. Russia and the U.S. signed documents on joint inspections in the Antarctic, and on the creation of a common Beringia national park. These agreements did nothing to help Moscow break into the Asia-Pacific markets.

But if one looks at APEC in terms of the Latin expression “from the existing to the possible”, then a different picture emerges. The proverb does have a flip side, however: “The existing does not follow from the possible”. What was discussed in Vladivostok was above all the “possible”. Nobody expected to sign any documents that would lay down the rules of the game in the region or seal the agreements reached by the political leaders of the economies at the forum. But a great deal was said during the meeting about prospects.

The forum was not expected to produce formal agreements: It was a platform for dialogue where all agreements were gentlemen’s agreements with nothing to stop one party reneging on them. Russia presented more than 50 initiatives, but many of the programs Moscow had prepared for discussion were long-term, not ready for implementation before 2018–20.

The summit was also important as a trigger to give a new impetus to the development of the country’s Far East. It is no coincidence that President Vladimir Putin, when asked about the considerable cost of the event – more than $20 billion, spoke about the ambitious infrastructure projects that had been implemented in Vladivostok. Under different circumstances these projects would long have remained on paper.

While previously, Russian political scientists and experts attending discussion forums spoke only about the possibility of shifting the country’s economic capital east of the Urals, the APEC summit turned that concept into a reality. Although none of the Russian leaders in Vladivostok spoke about “moving the capital”, the logic of such a move was nevertheless in the air. The international airport built in Vladivostok from scratch, two modern bridges, a number of new highways, a gigantic university compound whose capacity at present far exceeds the number of students in the region, would require an entirely new approach from Russia to the development of the Far East.

By carrying out grandiose construction projects in the two years preceding the summit, Moscow has demonstrated its readiness to invest in developing the country’s East. But now it is just as important to make these investments pay back.

Let us outline the goals that Russia can achieve thanks to the summit (leaving aside the numerous educational, innovative and environmental initiatives, which, though important, are auxiliary in character.) One of the outcomes of the summit in which Moscow has an interest involves plans for a transport corridor from Vladivostok to Brest to carry cargoes from the Asia-Pacific Region by rail to Europe.

There is no question as yet of renouncing the sea route via the Suez Canal. But the financial benefits – it would save more than $300 billion in the first few years and speed the journey by 30 percent – make the APEC countries consider the Russian plans in a positive way. This is understandable considering the unstable situation in the Persian Gulf and the Middle East, as well as piracy and other threats that increase the delivery costs for APEC countries serving Western consumers.

Russia does not make any demands of its future partners; it does not attach any political or financial strings to the policy it has declared. The problems Moscow raised during the summit were of a purely technical nature, and ones that the APEC countries had to solve to speed the movement of cargoes across Russian territory and enjoy the promised benefits: Unification of the transport code, automation of logistical systems and so on.

For its part, Russia promised to cut the time taken to clear foreign containers from 12 days to four to five days by 2018. The capacity of existing railways and highways will increase over the next six years. The government agencies responsible for cargo transportation will be integrated into a single computer and logistical scheme.

To implement all these projects, Moscow intends to augment the budget potential by bring in private investors, some of them from abroad. Incidentally, the Russian budget contributed only a third of the money spent on the summit, with the rest coming from long-term private investments.

It would be an exaggeration to say that Russia has gained an “Asian foot” on the back of the summit. But Moscow did identify “the possible” during the forum; a formula for successful trade which it managed to sell to its partners in the Asia-Pacific region in the context of the economic crisis.

While manufactured goods will flow west across Russian territory, the East will get fuel and energy. Not surprisingly, the participants in the summit – the presidents and prime ministers – took part in the APEC business summit that ran in parallel with the main events and addressed many of its panels.

The question might well be asked as to what the future holds in store for the “western component” of the Russian economy if Moscow is so persistently seeking economic benefits in the East. Moderate growth, stagnation or oblivion? Russia says it is interested in western markets. But it is obvious that Moscow is tired of overcoming the artificial trade barriers erected by the EU bureaucrats. In contrast, the East, with its vast markets, booming economies and free competition, looks more attractive and dynamic.

The longer Europe pursues a selfish policy and creates problems for Russian commodity trade, the less chance it has of remaining Russia’s main trading partner. It takes two to tango. Meanwhile, Asia is behaving like a bride-to-be. Its leaders see Russia not only as an additional market but also as an effective and, most important, rich investor capable of implementing large-scale capital-intensive projects.