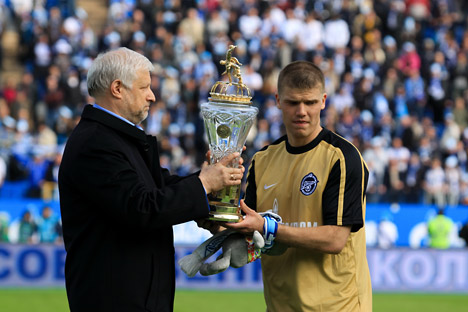 President of the Russian Football Union Sergei Fursenko, left, did his utmost to win the right for Russia to host the 2018 FIFA World Cup. Source: ITAR-TASS

10 other cities including St. Petersburg, Kaliningrad, Nizhny Novgorod, Kazan to host matches in the greatest show on earth.

11 Russian cities will play host to the World Cup 2018 with Moscow hosting the final, football’s governing body FIFA announced during a ceremony on Saturday that was broadcast on Russian national television.

The 2018 FIFA World Cup will take place in Moscow, St. Petersburg, Kaliningrad, Nizhny Novgorod, Kazan, Samara, Saransk, Volgograd, Rostov-on-Don, Sochi and Ekaterinburg, FIFA said. “The confirmation of the host cities is our first significant step on the road to the 2018 FIFA World Cup,” FIFA President Joseph Blatter said. “It is very much the contribution made by the cities which determines the success of this massive sporting event.”

Five of the stadiums nominated to host matches are under construction – the arenas in Kazan, St Petersburg, Sochi and Saransk, as well as Spartak Moscow’s new stadium – and most of these will open to the public by 2014 at the latest, FIFA said. A plan will be drawn up by the December for the construction and reconstruction of stadiums for the tournament. Work is already underway on a federal law for the FIFA World Cup, and this piece of legislation was recently tabled at the State Duma, FIFA said.

Russia’s goalkeeper Igor Akinfeev, who is the first Russia 2018 ambassador said, “the World Cup’s around six years away, but already we can see that football fans are starting to look forward to a major festival.”

Moscow’s Luzhniki Stadium will host the final, but the competition will give Russia an opportunity to showcase many smaller cities.

All the cities that made it into the final list of Host Cities for the World Cup took part in the programme broadcast on Channel 1. Each time young footballers Maksim and Artem opened a new envelope in the studio, the city which had just been awarded FIFA World Cup Host City status linked up live with the Moscow studio.

The beautiful northern capital of St Petersburg was the first city to get selected. At a studio in the city’s Zayachy Island, famous Russian artists and aspiring footballers studying at Zenit, burst out with joy. “I come onto the stage in order to gift the audience the music of the great composers,” Valery Gergiev, conductor and artistic director at Mariinsky Theatre, said. The conductor was involved in the city’s bid to host matches. “But ever since 2 December 2010, when I walked up onto the stage in Zurich as part of the Russian delegation to thank the FIFA Executive Committee for entrusting us with the 2018 FIFA World Cup, I have been dreaming of being a spectator, so that I can watch the virtuoso performances of the world’s greatest footballers at Russia’s World Cup stadiums,” Gergiev was cited as saying on FIFA’s website. “Today, that dream came a little bit closer.”

An exhibition match involving the Republic of Tatarstan’s student football league was arranged in the republic’s capital Kazan, to coincide with the ceremony. Similar scenes of joy were witnessed in other cities including the Baltic enclave of Kaliningrad and Nizhny-Novogorod.

Russia will host the 2014 Winter Olympics in Sochi and the showpiece annual Formula One event will also be held from the same year onwards in the country. With Russia country hosting three major world sporting events in the next six years, there will be a massive infusion of capital to boost the country’s infrastructure and upgrade the transport and tourism sectors.