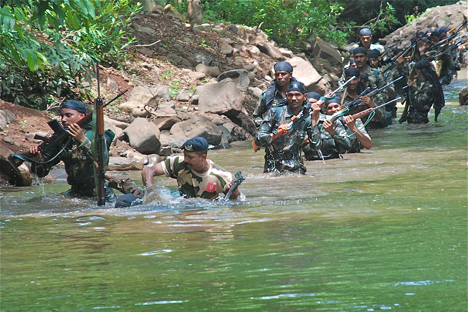 The alternate defence route being explored by India is joint development with Russia. Source: Press Photo

If India’s first Prime Minister, Jawaharlal Nehru, had a pet project it was non-alignment. Yet on November 19, 1962, as waves of Chinese soldiers rolled across the Himalayas, Nehru, going against every grain of his non-aligned soul, sent out this SOS to US President John F. Kennedy: “The situation that has developed is….desperate. We have to have more comprehensive assistance if the Chinese are to be prevented from taking over the whole of Eastern India. Any delay in this assistance reaching us will result in nothing short of a catastrophe for our country.”

Nehru, in a state of panic, listed out what he needed – at least “12 squadrons of supersonic all-weather fighters” and “modern radar cover that we don’t have”. “US Air Force personnel will have to man these… while our personnel are being trained. US fighters and transport planes manned by US personnel will be used for the present to protect our cities and installations from Chinese air attacks….”

How did a rapidly industrialising India end up in a crunch situation where it had (as the American WWII limerick goes) “no pills, no planes, no artillery pieces, and nobody gives a damn?” What made one of the chief architects of non-alignment grovel before a country whose proposals he had repeatedly spurned?

Modern India’s cavalier attitude towards arms production and defence was partly to blame. Pacifist Indian politicians viewed the military as an embarrassment because it clashed with their peddling of peace – even if there were no takers for those peace overtures.

Here’s what noted Gandhian Acharya Kriplani said on the defence budget in Parliament in 1957: “The mounting expenses on the army must be cut down. The followers of Gandhi and adherents of universal peace should not increase military expenditure.” Five years later when the Chinese attack caught India napping, the same Kriplani was calling for heads to roll. It never occurred to him that he was one of the playmakers of the debacle.

Indians living in today’s militaristic times will find it difficult to believe that in the 1950s and ’60s India had acquired a reputation as a shirker of self-defence. A top secret US State Department document of 1961 declassified in 1995 reveals Nehru’s feral dislike of nuclear weapons despite China’s active atomic programme.

The State Department seeing China’s advanced preparations for a nuclear test recommended that India be provided with technological help to develop a nuclear weapons capability. The reason was the US did not want the first Third World nuclear power to be a communist state. Since India had a highly advanced nuclear programme, it was seen as best capable of receiving American assistance.

The State Department asked Ambassador John Kenneth Galbraith to propose the plan to Nehru. Galbraith shot down the idea, saying the chances of Nehru rejecting a US offer of assistance were “49 out of 50”.

So how well did Nehruvian pacifism serve the country? India’s obsession with keeping its nuclear virginity reached such absurd proportions that in 1987 when Pakistan’s rogue scientist A.Q. Khan brandished his newly acquired nukes at India, New Delhi did not have an operational nuclear bomb.

Belatedly, however, India’s political leadership and bureaucrats have woken up to the fact that the armaments industry needs to be revived. The chief reason is that India’s needs are not just a fighter here or a tank there; they extend to a wide range of weapons platforms. Many of these like nuclear powered subs, aircraft carriers and advanced stealth fighters are not available off the shelf.

Besides, there is a huge outgo of dollars in the bargain. Finally, even as China has graduated from knockoffs to genuine built-from-scratch weapons, including its latest stealth fighters, India cannot continue to import indiscriminately. Placing one’s security at the pleasure of another country is not good policy.

The world of offsets

Currently, the catchword at the Ministry of Defence is offsets – where at least 30 percent of the value of a military contract is sourced locally. Offsets, which have their origins in the detailed policy guidelines issued in May 2006 in the Defence Procurement Procedure, are supposed to be the magic mantra that will deliver world class defence technology to India’s doors.

How exactly is this progressing?

I asked Major General Mrinal Suman, India’s foremost expert in defence procurement and procedures, if the offset policy is helping the country build a defence manufacturing base.

According to Suman, who currently heads the Defence Technical Assessment and Adivsory Service of the Confederation of Indian Industry, “Nineteen, offset contracts worth Rs 16,000 crores (around $3 billion) have been signed since 2006 when offsets were introduced – 14 for air force purchases and 5 for naval hardware. No offset contract has been completed and audited as yet. As all contracts entailed export of low-tech components/sub-assemblies, Indian industry has not gained at all.”

The key problem with offsets is the enormity of the purchases. India is expected to import over $100 billion worth of equipment in the next five years, so the offsets are the region of $30 billion.

Currently, government companies not only monopolise India’s defence industry, but the private sector has been kept at a distance. Foreign vendors are, therefore, unsure if the Indian defence industry can absorb such huge offsets. These foreign vendors, with powerful lobbyists working for them, are leaning on India to widen the scope of offset activities to include fields that are unrelated to defence.

Or take the case of the Rafale, which has a 50 percent offset clause. Will France transfer the entire technology suite of the aircraft to India as they so exuberantly declared? Suman says, “The French are certainly more accommodative than others but it is doubtful if they would go the full distance. They will try and extract their pound of flesh during hard bargaining.”

The alternate route being explored by India is joint development. This is best exemplified by the FGFA, where both India and Russia will build, buy and export large numbers of the Sukhoi T-50 stealth fighter.

According to Suman, “Rather than procuring Russian equipment, India is forging a partnership with Russia to develop newer equipment jointly.” He further says that while Russia may not offer its latest technologies readily, Moscow’s track record is far better than that of most other nations.

The $600 million Multirole Transport Aircraft that HAL is developing with Russian partners Rosoboronexport and UAC-Transport Aircraft is another prime example where the two counties will build, buy and export on a 50:50 cost sharing basis. And unlike the FGFA, where the design was largely finalised before India came in, the MTA will be designed from scratch.

Transport aircraft is one area where India did not even venture during the screwdriver technology phase. And with India’s defence and civilian sectors requiring such planes in their hundreds, the 20-tonne aircraft and its derivatives will be the missing link in India’s skies.

Seeing the pace of the FGFA and MTA, the US has invited India to the F-35 programme. Saudi Arabia too has shown interest in joint weapons development with India. If the joint route is getting increasingly crowded, there must be a very good reason for it.

Suman says the reason why 65 years after independence India continues to import virtually every major item of defence is the preferential treatment of the public sector. “With assured orders and a captive customer base, the public sector never felt the need to exert and modernise,” he says.

But the bias in favour of public sector firms is less pronounced now. Mayank Bubna and Raj Shukla write in the World Politics Review that the government has recently tried to encourage a local military-industrial complex by offering financial support of up to 80 percent of the development cost incurred by Indian companies in the design of prototype defence equipment.

While a slew of private companies, including Mahindra and Tata, have jumped in, it will be a long time before we see an Indian Boeing, Sukhoi or Northrop.

As Bubna and Shukla conclude, “Yet the shift to self-reliance, while admirable, is a very time-consuming and financially and structurally intensive process, one that demands patience.”