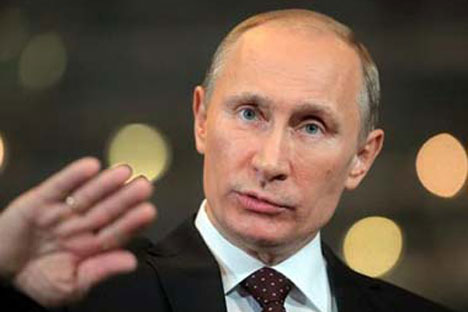 'I am confident that in future, we shall be able to find opportunities for arranging our personal meeting,” Putin wrote in his letter to Zardari, adding “We shall always be happy to receive you in Russia.' Source: AP

Undoubtedly, Pakistan holds a strategic place for Russia, as far as, its geopolitical interest is concerned in South Asia and Central Asia.

Russian President Vladimir Putin’s unexpected announcement of postponement of his visit to Pakistan days before his arrival in Islamabad, is a great setback to the efforts of his Pakistani counterpart Asif Ali Zardari, who  has been, in the past few years, trying to make a turnaround in the otherwise “strained” and  “unsmooth” relations between the two countries for decades.

Putin informed the Pakistani side last week about the decision of postponement of his visit on October 2-3, when Zardari was in New York, without giving any firm date of his “rescheduled” visit to Islamabad in the future. Had his visit materialised, indeed, it would have been a first visit by a Russian President in the history of Russia-Pakistan relations.

It was supposed to be a genuine sense of reciprocity that the Kremlin had shown to Zardari’s efforts to upgrade the bilateral relations to the highest political level, whatever might have been the reasons for the putting off Putin’s visit to a later date.

The Russian side publicly did not give any reasons for the postponement and rescheduling of the Putin’s visit. Last Thursday, although the Pakistan Foreign Office leaked the “suitable” parts of the Russian President’s letter informing Islamabad about his decision to call off the visit, it did not provide any reasons why Putin declined to travel to Pakistan at this point of time.

The Foreign Office only said in a statement that a summit meeting of the leaders of quadrilateral group of countries, including Pakistan, Russia, Tajikistan and Afghanistan, which was planned to be held in Islamabad on October 2-3, was being “rescheduled.” The quadrilateral summit was scheduled to be hosted on October 3 and Pakistan was expecting Putin to arrive on an official bilateral visit in the Pak capital on October 2.

“I am confident that in future, we shall be able to find opportunities for arranging our personal meeting,” Putin wrote in his letter to Zardari, adding “We shall always be happy to receive you in Russia.”

“New summit dates will be worked out after seeking convenience of the respective leaders through diplomatic channels,” the Foreign Office spokesman told reporters.

As for the reasons of the cancellation of the trip by the Russian President, according to media reports, Putin’s visit to Islamabad was timed with the convening of the quadrilateral summit of the leaders of Pakistan, Russia, Tajikistan and Afghanistan, which he was supposed to attend. However, Russia denied that Putin’s visit was ever confirmed, claiming it remained only on the discussion level.

“Russia agreed to take part in the quadrilateral meeting, but we never said Putin will lead the Russian delegation (at the quadrilateral summit),” the head of the 2nd Asia Department in the Russian Foreign Ministry, Zamir Kabulov was quoted as saying in some press reports, blaming the Pakistani side for the fiasco.

Despite the refusal by the Russian and Pakistani sides to disclose the reasons for the postponement of the visit, there was a wide speculation in media as to why the Russian President was reluctant to come to Islamabad at this particularly important juncture of the upward trend of bilateral relations.

Diplomatic sources said Putin’s decision to put off his visit to Islamabad could be linked mainly to two reasons : Moscow’s security concerns in the wake of violent protests in the country over the anti-Islam film “Innocence of Muslims” made in the US, and Islamabad’s unwillingness to sign a deal allowing Russian energy giant Gazprom to build its section of the Iran-Pakistan gas pipeline.

However, what was surprising in this connection that there was even no major word in the Russian media about the coming Putin’s visit to Pakistan. Of course, some Russian newspapers reported quoting the Pakistani press on the possibility of the cancellation of the President’s visit stressing that with no special emphasis by Russian and Pakistani leaders on the bilateral summit, it was most likely that Islamabad may not have prepared well for the summit, from the point of security risk in the Pakistani capital, and economic and political agenda for the Putin-Zardari summit-level talks.

According to many political observers, the differences between the two sides, over an estimated $1.2 billion deal to award the construction of Iran-Pakistan gas pipeline to Gazprom was the main reason for the postponement of the visit. Gazprom reportedly wanted the construction of the gas pipeline without any participation in the bidding process. But Pakistan was reported to have ultimately balked at Russia’s proposal, arguing such a step would be contrary to the general rules and regulations of the Public Procurement Regulatory Authority (PPRA).

As a result, they pointed out, the Kremlin might have “in retaliation” called off Putin’s visit, promising to reschedule it, giving the Zardari government to reconsider the Russian proposal, in which Moscow is still interested, despite stiff American opposition. Currently, Pakistan is engaged in conducting negotiations with three countries, including Russia, China and Iran. While China has not responded to the Pak offer, Islamabad has also entered into talks with Iran over the project.

Russia’s disappointment over the refusal of Pakistan government to allow the Gazprom to build the Iran-Pakistan gas pipeline was quite understandable, since it made a proposal in this regard when Pakistani Foreign Minister Hina Rabbani Khar paid a visit to Moscow, in February this year. The Pakistani Government had also submitted detailed engineering design of Iran-Pakistan gas pipeline project during the meeting of Pak-Russia Joint Working Group in June.

Pakistan and Russia also held final rounds of talks in September to decide whether Gazprom will sign deals to participate in the Iran-Pakistan, TAPI (Turkmenistan, Afghanistan, Pakistan, India) gas pipeline projects and the Central Asia-South Asia electricity transmission from Kyrgyzstan to Afghanistan and Pakistan (CASA-1000), and construction of railway lines and motor roads from Tajikistan to Pakistan as new trade routes.

Russia has shown keen interests in these ambitious energy and infrastructure projects, with Putin promising to invest $500 in CASA-1000. It is also willing to assist Pakistan in oil and gas exploration and the modernization and expansion of the Steel Mills, initially constructed by the former Soviet Union.

The face of Russia-Pakistan bilateral relations have been changing ever since Zardari held bilateral talks with the then Russian President Dmitry Medvedev, at the sidelines of quadrilateral summit of the leaders of Russia, Afghanistan, Pakistan and Tajikistan, at his residence of the Black Sea resort of Sochi, in August 2010.

The Sochi summit provided a rare opportunity for the Kremlin to turn the page on its relations with Islamabad, with each side looking on each other with deep suspicion and mistrust for decades. Sochi became a turning point as the bilateral summit at the highest level was marked by “uncharacteristic warmth” from both sides. Medvdev invited Zardari to pay an official visit to Moscow, while the Pak President extended a similar invitation to Medvedev.

Russia has since then assiduously been building the new format of improving the relations between the two countries, with Zardari paying an official visit to Moscow in May 2011. During the three-day visit, the two sides signed a number of agreements on cooperation in agriculture, aviation and energy.

Despite the postponement of his visit, Putin in his letter to Zardari, expressed his willingness to “jointly enhance our efforts to further develop Russian-Pakistani ties and advance mutually beneficial trade and economic projects.”

Apparently, this shows that in the aftermath of the Russian President’s visit, both Moscow and Islamabad have agreed to put their past behind and move forward towards the development of bilateral trade and investment in Pakistani economic projects, political observers said.

One indication which way the wind is blowing, is clear from the press reports in Islamabad that  Pakistani Army chief Gen. Ashfaq Parvez Kayani will pay a four-day visit to Moscow on October 3-6,  in a bid to “address the temporary hiccup” in bilateral relations, following Putin’s decision not to travel to Pakistan. Kayani last visited Moscow in 2009, at the invitation of the Russian Ground Forces chief Gen. Vladimir Boldyrev.

Kayani’s visit to Moscow was on the cards for months, but got additional urgency because of the cancellation of Putin’s trip, Pakistani media reports said.

Undoubtedly, Pakistan holds a strategic place for Russia, as far as, its geopolitical interest is concerned in South Asia and Central Asia. Moscow is very concerned over the stabilization of Afghanistan after the withdrawal of US forces in 2014, with Washington claiming to maintain foreign bases on Afghan territory.

As a whole, both Russia and Pakistan see eye to eye on the prospects of possible developments of scenarios in Afghanistan after the withdrawal of US in 2014 and both are opposed to US maintaining military bases in the country. Russia has also already backed Islamabad’s request to become a full member of the Shanghai Cooperation Organization (SCO), in order to make Central Asia and Euro-Asian region, a stable region, with emphasis that good relations with Pakistan would certainly be one of Russia’s top priorities, in the future.