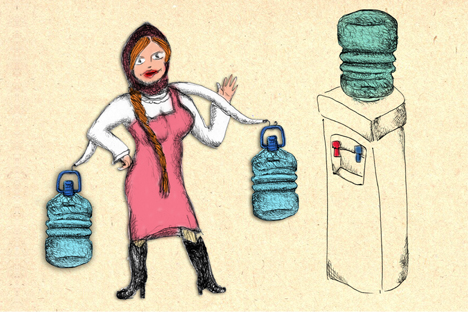 Our office, like offices everywhere, has a water cooler in the office kitchen. One day last week, I walked into the kitchen cooler to find six of my female co-workers standing around the water cooler. “I want water!” one of them said, informing me as I went to fill my glass that the cooler was empty. Without giving it much thought, I reached for one of the full jugs on the floor – as everyone else looked at me in horror.

“Why not? It’s no big deal,” I responded, thinking to myself: I’m a big person, I do some weight training, picking up the water jug isn’t going to inconvenience me.

“No,” said another colleague, “men will not respect you if you do such things.”

And so, as they called the office manager to change the water bottle, I was left thinking that in the American form of feminism, the idea is that men won’t respect women if women expect men to do everything. Now, I’ve been guilty of telling my daughters that certain things – killing bugs, for example – are “man jobs. But that’s just because I don’t really want to do these things, not because I can’t. And the last time my father heard my daughter call bug killing a man job, he called her out saying, “Don’t ever think a man can do something you can’t do.”

Obviously there is a cultural disconnect here.

Each Russian man has a very clear perception of the things women should and shouldn’t do in Russia. Each Russian man knows by heart that he should offer woman a hand when she gets out of the car or a bus, help her carry heavy bag and open a door for her when they come to it simultaneously. One small detail – when he’s around. If there’s not a single representative of the stronger sex in a walking distance, women have to do all these things by themselves.

It doesn’t have anything to do with the lack of feminism – in fact, Russian corporate world is very westernized and nobody doubts women rights to hold top management positions or wear pants in the office.

Evil tongues say it happens because most of the men in Russia are “mama’s boys” – they were brought up by their moms and (worst case) grannies who implement the “men should always admire and help women” role model in their subconsciousness.

But I tend to think that it’s simple politeness and sign of appreciation of the beauty and fragility of the fairer sex. We know that you are able to open that door by yourself, but… After you!