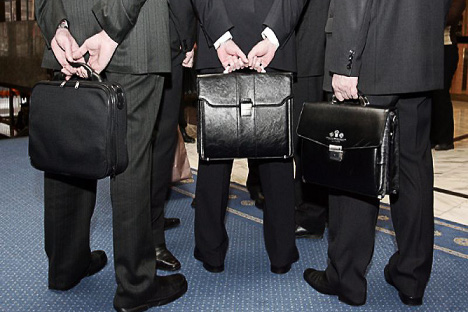 The government proposed to create “a mega-regulator” through integration of Central Bank of Russia and the federal market regulator. Source: RG

The diversification of economy is another top priority for Russian Government in fighting the global crisis.

Focusing on investment rather than on borrowing or boosting oil revenues would be key in securing economic growth during the global crisis, according to both Russia’s president and the country’s finance minister.

“However, we believe that encouraging economic growth, business activity, trade and investments is a pledge to further stability,” Putin said, stressing that Russia’s accession to the World Trade Organization would help it to attract investment. “We suppose that this step would positively affect investor sentiment and clear the way to prospective projects.”

Russian authorities have pledged to attract foreign investors, and boost the Russian Direct Investment Fund, which was created last year. Putin said the government should provide about 62 billion roubles ($2 billion) to the Fund this year. "Last year we invested 62 billion, this year we will again, and we will study this possibility for next year,” Putin said. He acknowledged that this money is not in the 2013 budget yet, but it "absolutely has to be done."

The diversification of economy is another top priority for Russian Government in fighting the global crisis.“Dependency on the oil prices should decrease,” Putin pledged. “Our target is to cut non oil budget deficit from 8.5 percent in 2012 to 5.5 percent in 2015.”

However, Russian politicians haven’t ruled out raising capital for the budget and for companies through borrowing on the international markets. Anton Siluanov, Russian Finance Minister, says that in the wake of the global turmoil, reliability and safety comes as a priority in Russia’s financial strategy.

“Currently we are investing into highly reliable but low return assets. We borrow at 4-5 percent in international markets and place at 1-2 percent,” where the difference comes as a risk premium, Siluanov said. “Logic here is that we hedge risks this way. If a crisis strikes, if the oil pricesfalls sharply, the cost of lending will go up to 7-8 percent. So it’s better to borrow now,” he explained.

Today Russia’s state debt accounts for 10 percent of GDP, while the debt to foreign creditors is about 2.5 percent, according to government data. For comparison, the sovereign debt of Italy totals 123 percent, Japan – 226 percent and France – 83.5 percent of GDP.

Russia is also going to secure tighter banking regulation during the time of global crisis. The government proposed to create “a mega-regulator” through integration of Central Bank of Russia and the federal market regulator. At the Forum, Putin called on the banking and investment community to discuss the idea, which has both opponents and advocates. Earlier Finance Minister Siluanov and the head of Federal Service for Financial Markets Dmitry Pankin supported the plan. But the Minister of Economic Development Andrey Beloussov reacted coolly, stressing probable conflict of interests between the institutions.

Meanwhile, many countries are taking measures to secure tighter controls on banking during the crisis. The European Union has been discussing the idea of creating banking union in the region, while in the UK Martin Wheatley, the designated head of Britain’s new Financial Conduct Authority announced a package of reforms, including a strict audit of the banks that provide the data used to calculate the LIBOR interest rates, and transition of control responsibility from The British Bankers Association (BBA) to a new government panel.