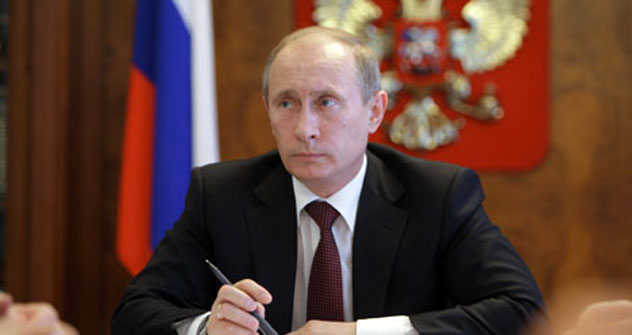 Russian President Vladimir Putin’s visit to India in November is set to clear the air on some contentious issues. Source: RIA Novosti

Russian President Vladimir Putin’s visit to India in November is set to clear the air on some contentious issues and set the stage for an all-round acceleration of ties across diverse fields.

Amid the shifting regional geopolitics and Moscow’s declared turn to Asia, New Delhi is bracing to roll out the red carpet for Russian President Vladimir Putin, described by Prime Minister Manmohan Singh as “a special friend of India,” in early November. Putin’s first visit to India in his third presidential tenure will have a substantive agenda, which will be high on both symbolism and substance. The visit is set to reinvigorate the “special and privileged partnership” between India and Russia and will help iron out some recent irritants in the relationship in the areas of civil nuclear cooperation, defence and investments.

Over the last decade, the annual summit meetings between the leaders of India and Russia have come to reflect the cosiness and camaraderie of close friends who have more to give to each other and hardly much to quibble, but this time round Putin’s visit takes place against a more complex regional backdrop and some jarring notes in bilateral ties that give it an added significance. In the end, Putin, the original architect of the India-Russia strategic partnership in the 21st century, is sure to surprise pessimists and critics by clearing the air on contentious issues and setting the stage for an all-round acceleration of India-Russia relations in the next few years.

The agenda for the summit is not yet clear, but officials from both sides are in close touch to firm up tangible outcomes that will send a clear message to the world that despite occasional hiccups, the India-Russia partnership is set to climb new heights. In this context, the preparatory visits by Russia’s Foreign Minister Sergei Lavrov and Deputy Prime Minister Dmitry Rogozin to New Delhi in October will ensure that there are no notes of dissonance when Putin sits down for talks with Indian Prime Minister Manmohan Singh in November.

On top of the agenda will be fast-tracking civil nuclear cooperation, the showpiece of the rejuvenated India-Russia strategic partnership. One is only hoping that by the time Putin touches down in India, the Indian Government is able to find some way out to calm protests at the Kudankulam Nuclear Power Plant (KNPP) in the southern state of Tamil Nadu and make the plant operational.  Built with Russian assistance, the units I and II, with installed capacity of 1000 MW each are ready and are waiting to be commissioned but have become embroiled in protests led by anti-nuclear activists.

The summit talks will also focus on finding a mutually acceptable deal on the units III and IV of the KNPP, which have become a point of contention, with differences in perception over India’s civil nuclear liability law. Russia argues that the civil nuclear liability law should not apply to these units as the agreement on them predates the 2010 civil liability law, and could be seen as “grandfathered” by the original 1988 agreement. But India has made it clear that making an exception for Russia will amount to diluting its civil nuclear law which will encourage the US and France to seek similar exemptions, which New Delhi can ill afford. Moreover, the Indian Government can’t concede ground to Russia on this point as it can’t be seen to be subverting a national law to favour any country. Sources indicate that given huge stakes of both countries in the nuclear cooperation, a mid-way compromise formula will have to be found that addresses mutual concerns, but one is not sure what this compromise could be.  In July, the nuclear officials of India and Russia in Moscow had signed a protocol for Russian funding for units III and IV which envisages Russia extending export credit amounting to $3.4 billion. The estimated cost of units III and IV is $6.4 billion, of which $3.4 billion will be taken care of by Russian state credits. If the liability issues are resolved, a final agreement on Units III and IV could be signed during the visit.

Stepping up trade and economic ties, too, will be high on the agenda amid growing realisation that the economic ties have not kept pace with defence and strategic cooperation between the two time-tested partners. Bilateral trade is still below $10 billion, and mutual investments are not substantive enough due to a host of issues, including scant information about each other’s market and cumbersome visa procedures. In this context, there could be some breakthrough on streamlining of procedures and easing of the visa regime for businessmen. The two sides are also expected to reiterate their resolve to scale up bilateral trade to $20 billion by 2015. Given the importance Putin attaches to Belarus-Kazakhstan-Russia Customs Union, India may declare its readiness to explore the prospects of a Comprehensive Economic Cooperation Agreement (CECA) with the customs union.

On the economic front, the two sides will be looking to resolve the Sistema stalemate. Russia will seek concrete assurances over the security of Russian telecom giant Sistema’s $3.1 billion investment in a joint venture in India, which has got endangered by India's Supreme Court’s order in February cancelling all 122 licences (including that of Sistema Shyam Teleservices) on allegations of bribery and corruption in the allocation of 2G spectrum.  As the matter is still sub-judice, the Indian prime minister could give a fresh reassurance, but a breakthrough on this sticky issue is unlikely.

The defence ties, the bedrock of the India-Russia relationship – Moscow supplies over 60 percent of India’s military hardware needs – are poised to get a boost, with the two countries set to sign a mega deal on a futuristic stealth fifth-generation fighter.  If all goes well, the two sides will ink R&D phase contract for the Fifth Generation Fighter Aircraft project during the visit. Otherwise, the two sides are expected to announce the deal under which India will spend around $35 billion over the next 20 years in its biggest-ever defence project.

Besides bilateral issues, there will be a cluster of regional and global issues on the table when Putin meets Manmohan Singh in New Delhi. The two leaders are expected to appraise the fragile security situation in Afghanistan and the prospects of cooperation between India and Russia in the wake of the withdrawal of international combat troops from that country. India and Russia partnered in the Northern Alliance that helped overthrow the Taliban regime in 2001, and the congruence of interests – the shared threat perception from the Taliban-affiliated militant networks – will push the two countries to cooperate closely in stabilizing Afghanistan in the days to come and after 2014. With Putin declaring Russia’s stakes in the Asia-Pacific region, and the US roping in India as a lynchpin of security in the region, one can also expect discussions on possibilities of cooperation in the region that has emerged as a new zone of competition among major powers. India is a key strategic partner in the Asian-Pacific Region, Putin had said in a much-quoted article in Russian daily Moskovskie Novosti in late February. Against this backdrop, Putin may announce Russia’s backing for India’s bid to join the Asia Pacific Economic Cooperation (APEC) forum.