Development of grassroots sports should take priority over money 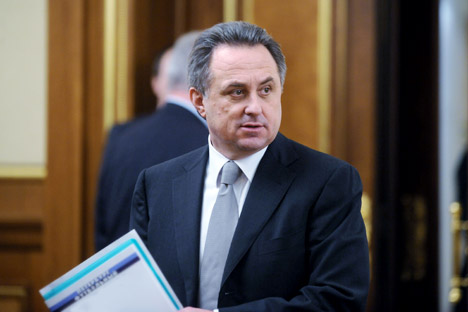 We should remember that even now, when only 20 percent of Russian people regularly take part in sports, it saves the country more than 50 billion rubles ($1.6 billion) in sick leave pay. Source: ITAR-TASS.

Vitaly Mutko tells Izvestia about the change in sports policy priorities, in the wake of the London Olympics. The Russian Minister of Sport thinks that popularizing sports is more important than money, when it comes to improving the performance of the country’s national teams.

Russia’s experience at the London Olympics and Paralympics showed experts and athletes alike that the country has everything it takes to train its international teams. Yet there are still no world-class athletes from Russia in some of these world-class sports. Vitaly Mutko, the Russian Minister of Sport, told Izvestia of the need to “pivot toward mass sports” and explained how this would be done.

Izvestia: What exactly does a “pivot toward mass sports” mean? How many billion rubles will it cost the country?

Vitaly Mutko: Let us not start with money. This year we have to complete the modernization of physical education at schools. At present, children have only three hours of physical training a week. This is enough to instill the habits of an active and healthy lifestyle, but the challenge now is to make sure teachers at all schools can conduct these classes properly. That calls for modern methods.

The state spends 60 billion rubles ($1.9 billion) a year on training children at sports schools. It used to be within the domain of the Ministry of Education; now the Ministry of Sport will be in charge. We’ll start with the material base. Often this does not involve extra cost. In Chuvashia, for example, the president has handed over several sports facilities that were not being used to their full potential to sports schools. We will gradually raise salaries, introduce new training standards and change the status of sports schools from continuing education institutions to sports training institutions.

Izvestia: What does that have to do with mass sports? Wouldn’t you agree that sports schools – especially after such changes – will become part of professional, rather than grassroots sports?

V.M.: I disagree. This is still grassroots sports. It is true that a sports school may be a stepping stone to professional sports. But out of the 3.4 million children attending these schools, only about 50,000 go on to compete professionally.

Izvestia: Is that many?

V.M.: It is about the average. China has similar figures. It is enough to pick about 9,000 members for national teams in all sports: the first string, the second string, the reserve team and the junior team.

Izvestia: Where will you get the money to develop this scheme? Spending [federal] budget money involves decisions on who gets money and who doesn’t. So, money has to be taken away from somebody.

V.M.: This is not about taking money away from anyone. This is about priorities. If sports are part of quality of life, then financing must be appropriate. We started out spending 30 billion rubles ($961 million) a year in 2006–2008, and now the figure is 52 billion rubles ($1.6 billion). We need to keep this pace up. This year 14 billion rubles ($449 million) will be spent on grassroots sport. The country must earn that money and spend it judiciously, so as not to take money away from anyone. The debate today is whether education should include character training and how to promote a healthy lifestyle. The Ministry of Health is going to spend 800 million rubles ($25.6 million) to organize healthy lifestyle departments at clinics.

Izvestia: What is your take on the issue?

V.M.: We should remember that even now, when only 20 percent of Russian people regularly take part in sports, it saves the country more than 50 billion rubles ($1.6 billion) in sick leave pay. Paid sports services already cost 1.5 billion rubles ($48 million) a year. We should double the share of sports enthusiasts among Russian citizens by 2020, and the economic effect from that is obvious. It costs the federal budget about 18,000 rubles ($580) a year to train one child at a sports school. And think what it costs to keep a juvenile delinquent in a correctional facility for a year.

Izvestia: Would private companies be happy if, instead of working, their employees were getting ready for sporting events?

V.M.: A normal, modern employer understands that, to be competitive in the market, its employees must be healthy. The company Evrochim has four factories, and the owners build an ice arena and set up a hockey club in every city where they have a factory. The company pays for it. Why? Because they understand that, in ten years’ time, people will inevitably come to the city in search of work. And it would be much better if these people play sports and do not drink, and know that they can send their children to a hockey club.

It may seem an odd thing to say, but the biggest problem in Russian sports is too much federal financing. The less the state interferes with sports, the better. When all the clubs and sports federations are addicted to budget money, their directors have no incentive to promote, develop and popularize their sport. It makes no sense to them, because sports wallow in money. Just one example: Russian sports receive nearly $3.5 billion per year from budgets at all levels and from state-owned companies. Is that a lot? Let’s compare with some other countries. The U.S. government spends nothing; the British government spends $96.8 million. Russia spends $3.5 billion. That money doesn’t go into building youth sports schools – it goes into buying foreign players. This makes sense for the clubs, because their performance is judged by the number of medals and cups they win. But I think this is not right. In my opinion, the only performance indicator should be the involvement of people in physical culture and sports. This is the cornerstone in all the countries that have an advanced sports culture.