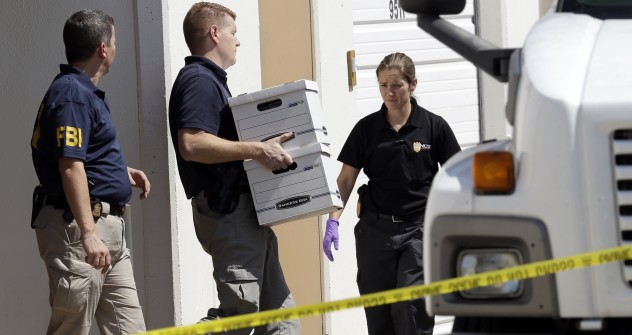 FBI agents carry boxes out of Arc Electronics Inc. on Oct. 3, 2012 in Houston. A Kazakhstan-born businessman was charged in the U.S. with being involved in a recent spy scandal between Russia and the U.S. Source: AP Photo / David J. Phillip

Another spy scandal spurred tensions between the U.S. and Russia in the wake of the 2012 American presidential campaign. While some Russian experts and officials relate the scandal to the elections in the U.S., other pundits rule out this possibility.

Moscow displeased with U.S. failure to inform it about Russians' arrest

In its report, the Houston office of the Federal Bureau of Investigationb (FBI) named 11 Russian suspects, among them executive director of Moscow-based distribution firm Apex Sergei Klinov, and company employee Dmitry Shegurov, and Yury Savin, who heads the marketing department of another Russian firm - Atrilor.  According to the FBI's press release, microelectronic equipment is subject to strict control in the United States. The authorities say that these devices could be used for military needs, including in radars, surveillance and guidance systems, as well as detonators.

The media quoted U.S. experts who presumed that Russians arrested in the U.S. on espionage suspicions might have supplied microchips and microprocessors for Russian anti-ship missiles and MiG-35 fighters. The experts said the microchips were either similar or identical with U.S. products. Yet Russian military company Russia's MiG Aircraft Corporation claims that it has never been collaborated with Apex and Atrilor.

"Our jets, including the newest multi-role fighter jet Mikoyan MiG-35, do not carry any counterfeit products," it said.  "That is simply impossible. We work with tried-and-true suppliers only. We know nothing about these companies; we have never worked with them."

"Neither Apex nor Atrilor is on our list of defense industry enterprises, which include 1,353 design bureaus, scientific research centers, plants and other organizations," a Russian defense sector source, who chose to remain anonymous, told Interfax-AVN.

Hardware components of 60-70 percent of equipment, 90-95 percent in certain cases, are acquired abroad either directly from foreign companies or through different firms, which probably included Apex and Atrilor, he said.

There is practically no way for defense industry enterprises to verify the legality of such dealers' acquisitions of hardware components abroad and their exports to Russia, the source said, adding that it is a matter for special services and customs authorities.

"In the absolute majority of cases, defense industry enterprises purchase hardware components and other equipment through public tenders. A tender is announced, requirements for the needed electronic components are determined and a state contract is signed with the winner of this tender. Apex and Atrilor could have participated in such tenders alongside other companies, acting as suppliers of hardware components in the event of their victory," the source said.

Likewise, Apex denies dealing with military technology exports. "Our company is a distributor of civilian electronic parts. We are not involved in exports of military technologies," a company representative told. "Apex is not linked with Russian security services either," he stressed. "The so-called "spy scandal must have been orchestrated by someone. We know nothing about alleged claims of U.S. security services; we are law-abiding businessmen. Apex plans to carry on its activity. We do not intend to shut down our business."

The Russian Consulate General in New York believes that "it is still premature to give any comment on this matter" after it  saw a press release, issued by the FBI, the diplomat said.

"The U.S. election campaign is in full swing, and the "love" for Russia trump card is being played as always," State Duma Security and Anti-Corruption Committee Chairperson Irina Yarovaya told Interfax. Accusations of the allegedly illegal export of military technologies brought against people with Russian names look doubtful under these circumstances, political instability in the U.S., the geopolitical atmosphere and the "Innocence of Muslims" scandal, she said.

"Even more, they cause profound suspicions," she added. Nevertheless, one should not jump to conclusions, Yarovaya remarked.

Moscow is concerned about U.S. accusations of several Russian citizens; it affirms that the accusations are criminal and have nothing to do with intelligence.

"As far as we know, accusations have been brought against a number of Russian citizens," Russian Deputy Foreign Minister Sergei Ryabkov said. "The accusations conveyed to us by the U.S. side are criminal; they have nothing to do with intelligence."

Some Russia's experts specualate that the campaign staff of U.S. Republican challenger Mitt Romney has masterminded the spy scandal.

The Republicans are pulling strings in security services for denting the position of U.S. President Barak Obama, who wants a decent relationship with Russia, according to Political Research Institute Director Sergei Markov.

"This spy scandal is an invention of the Republicans mindful of the approaching presidential election," he said. "This is an obvious attempt to weaken the position of Obama, an element of whose foreign policy is good relations with Moscow. So, the election staff of Republican candidate Mitt Romney pulls strings in security services to claim that Barak Obama wants to befriend a country, which spies and steals from the U.S."

Meanwhile, Russian Foreign Minister Sergei Lavrov There questions the implications between the illegal export of microchips from the U. S. to Russia and the American presidential campaign.

"I do not see any link between this situation and the election campaign," he said after negotiations with his Pakistani counterpart Hina Rabbani Khar.

The story is based on the news provided by the Interfax news agency and is intended for personal use only. It may not be reproduced or distributed in any form without express permission from Interfax. To request permission to republish, email: ifaxru@interfax.ru