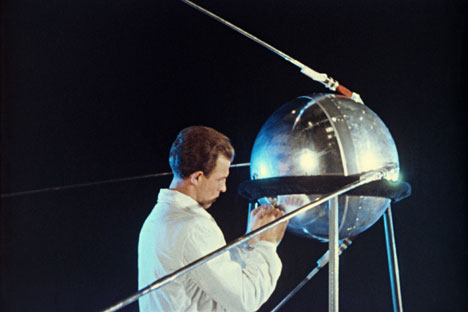 Sputnik 1, the first artificial Earth satellite, was launched into an elliptical low Earth orbit by the Soviet Union on October the 4th fifty-five years ago. The satellite was 58 cm (about 23 in) in diameter and weighed approximately 83.6 kg (about 183 lb). Each of its elliptical orbits around the Earth took about 96 minutes.

Monitoring of the satellite was done by Amateur radio operators. The signals continued for 22 days until the transmitter batteries ran out on 26 October 1957. Sputnik 1 was not visible from Earth but the casing of the R-7 booster, traveling behind it, was. The first satellite burned up on 4 January 1958, as it fell from orbit upon reentering Earth's atmosphere, after travelling about 60 million km (37 million miles) and spending 3 months in orbit.