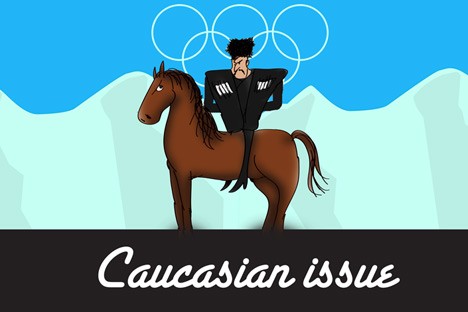 Over the past few years the so-called “Caucasian Issue” has featured ever more heavily on Russia’s political agenda. In 2014, the city of Sochi on the Black Sea will welcome the world for the Winter Olympics, inextricably linking the world’s largest sporting event with this hot-button issue.

The Circassian people who once lived close together in the Caucasus are now scattered across the globe: from Turkey to Europe, from the Middle East to the United States. To every Circassian person, Sochi has a special historical significance.

This is where Majlis was founded in 1861, in an attempt to unite forces and prevent the Russian Empire from encroaching into the Western Caucasus. It was also in Sochi that the Circassians lost this battle, more than 150 years ago.  The conflict ended in 1864, when Russian troops seized the Kbaade territory – the Circassians’ final island of defense in the Western Caucasus. This place now happens to be the location of Krasnaya Polyana, a ski resort and one of the main sites of the upcoming Winter Olympics.

For Russian forces, the events of 1864 represented a hard-won victory after many years of bloodshed in the Caucasian War. Of course, the native population sees these events quite differently. The war, along with the disease, famine and exile that accompanied it, wiped out a large portion of the Adyghe population. Faced with facts like this, it is easy to forget the good that came out of Russia’s presence in the Caucasus – Russia brought industry and modernity to the region. The Adyghe, Turkic and Vainakh peoples became less isolated after they were exposed to Russian, European and world culture. Nevertheless, historical wounds heal very slowly and current events are conspiring to dig up the nation’s troubled past.

It is not so much that the Sochi Olympics have re-opened the Caucasian Issue – it is more that Sochi 2014 has put the issue right in the center of the political spotlight. The problem can be broken down into several independent issues, including strife surrounding disputed territory and the fact that ethnic minorities feel under-represented in government. The issue of repatriating the Adyghe people has also become especially important since the recent conflict in Syria, a country which is home to between 30,000 and 120,000 Adyghes. Since the end of 2011, Syrian Circassians caught up in the civilian conflict have been applying to the Russian government and asking to return to their historical homeland.

This is just the latest issue to come to the fore in Russian foreign policy. When Georgia formally acknowledged the Caucasian Genocide that took place under the Russian Empire, the issue quickly turned into an international incident. This was not the first time Russians had heard this version of events, but no foreign state had ever described Caucasian history in that manner on an official level. There are several arguments that suggest this approach could potentially complicate relations between Circassians and the Abkhaz people, with whom they share blood ties. Tensions may even trigger a boycott of the Olympic Games. It is not for anyone to judge Tbilisi’s justifications for taking this step. More importantly, if these problems had been resolved, then there would have been no way to aggravate the situation.

Despite all of this, it seems the Russian government is burying its head in the sand. It has yet to adopt a clear stance on how to put an end to the Caucasian Issue, and people could be forgiven for thinking it has nothing to say on the matter. However, it should be remembered that, in 1994, the Russian Federation’s first President, Boris Yeltsin, issued an official apology for the Russian Empire’s unjustified treatment of the Caucasian people, to mark the 130th anniversary of the end of the Caucasian war. Even though repatriation is a notoriously tricky business, Russia has also had some success in this respect – one need only look at migration to the Republic of Adygea and the subsequent assimilation of Circassian families from Kosovo at the end of the 1990s.

On July 24, 2010, the Russian President signed a new version of a law on Compatriots Living Abroad, which extends the category to encompass those bearing relation to peoples who historically lived on territories of the Russian Federation. Still, one law is not enough. Russia needs a precise repatriation strategy that is written into the country’s general migration policy. The country needs a functioning program that does not run the risk of further provoking interethnic strife and land disputes. If Russia can manage to successfully resolve the issues surrounding Syrian Circassians, this could strengthen Russia’s position both in the Caucasus and in the Middle East. Ignoring the pleas of the Adyghe people living in Syria will only complicate preparations for the Olympic Games.

Finally, it is also high time the Russian people studied what happened in the Caucasian war and try to come to terms with the general history of the region, as well Russia’s role in it. Russia will not be the first country to face a task like this. Almost any multiethnic state will have encountered this problem at least once in its history, and some manage to deal with it better than others. Canadians and Native Americans have long been embracing their difficult past and integrating it into the national curriculum, museums, galleries, celebrations and sports festivals.  The most notable example of this was the impressive opening ceremony at the Vancouver Olympics in 2010.

Sergei Markedonov is a visiting fellow at the Center for Strategic andInternational Studies in Washington DC, USA.