Alzheimer's treatment on the horizon? 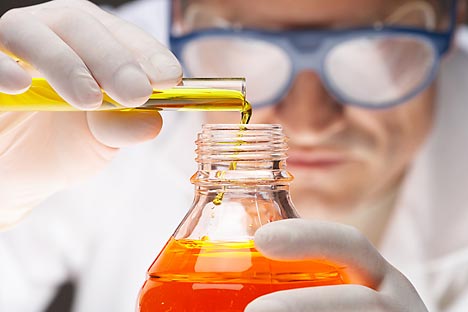 The new drug has already gone through a long series of initial clinical trials. Source: PhotoXpress

Two Russian institutions will take part in international clinical trials of a new drug to combat Alzheimer's and other neurodegenerative brain disorders.

Preparations are on in St Petersburg for clinical trials of a new drug to treat Alzheimer's. It is hoped that the treatment will be capable of preventing the deterioration of the brain’s cognitive functions, if the disease is identified early enough.

According to expert estimates, many thousands of patients suffer from Alzheimer's in Russia and even more around the world. The disease kills off brain cells, leading to significant deterioration of memory and intellect as well as serious behavioural problems. Today, Alzheimer's disease is considered the primary cause of senile dementia.

The condition is so serious that it is also acknowledged as one of the key medical and social challenges facing modern society. However, in Russia the public is poorly educated about its specifics. Because of limited diagnostic abilities and poor social support, patients are frequently left without the necessary treatment; all too often, the symptoms of Alzheimer's are simply dismissed as signs of old age.

Russian specialists point out that early diagnosis along with properly prescribed treatment can lead to greatly improved prospects for a patient over the course of the disease. However, adequate medication has been very slow to develop. Two Russian institutions, the Saint Petersburg Geriatric Medical-Social Centre and the Military Medical Academy, will take part in international clinical trials of a new drug to combat Alzheimer's and other neurodegenerative brain disorders.

The Geriatric Centre opened in 1985 and, after being inspected in 1999 by UN geriatric experts, was included in Europe's top ten institutions. The centre’s specialists focus on the issues of assistance and treatment for elderly people, including Alzheimer's patients. The Military Medical Academy was founded back in the 18th century and is now considered to be one of country’s best medical institutions and the leading training centre for military doctors.

The new drug has already gone through a long series of initial clinical trials, as well as the required testing on healthy people to reveal potential side effects. Participation in all such drugs trials is entirely voluntary.

The proposed treatment is quite innovative but assumes that Alzheimer's will be detected at the early stages, when the brain has not yet begun to deteriorate. It is thought that the drug, administered intravenously, will break down Apolipoproteins, a fragment of which is called beta-amyloid and is stored in brain tissue causing gradual atrophy.

The clinical trials are to be performed simultaneously in 19 countries but we are a long way from a definitive evaluation of the drug's effectiveness. Specialists at the Geriatric Centre point out that the eagerly awaited results will only be available after a couple of years of study and analysis. Perhaps a long time to wait for those suffering now, but the prospect of treatment offers a glimmer of hope for the significant percentage of us who will one day be afflicted with the disease.