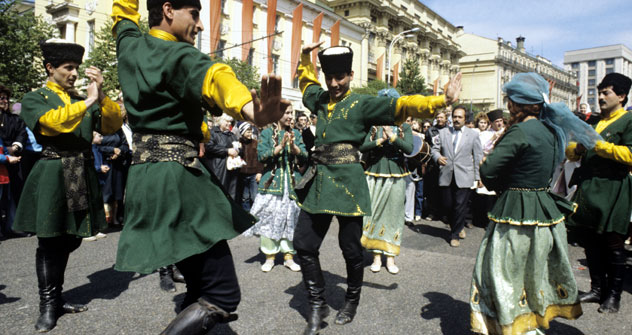 The Caucasian diaspora sticks to its traditions even in Moscow which sometimes results in unpredictable consequences. Source: RIA Novosti / Fred Gringerb

Leaders of the Caucasian diaspora in Moscow are to hold talks with their fellow countrymen to prevent interethnic conflict in Russia's capital.

The Chechen diaspora in Moscow is preparing to discuss methods for reducing interethnic tension and preventing future conflicts in Russia’s capital. According to the Union of Chechen Youth, the aim is to explain to young Chechens how they should behave in Moscow so that their actions do not adversely impact the overall reputation of the Chechen people.

Leaders of the diaspora have intervened in the wake of a number of high-profile incidents involving migrants from the Caucasus.

In particular, wide public debate was sparked by the so-called “Dagestani wedding” incident. In their celebratory zeal, revellers from Dagestan in southern Russia fired off live ammunition in the center of Moscow and were detained by riot police.

The situation became even tenser after a mass brawl in the Moscow subway, which left a journalist from Fontanka.ru injured. It was later established that natives of another southern republic – this time Chechnya – had been involved. The task of extinguishing the flame of conflict has fallen to leaders of the Caucasian diaspora.

“We will hold a meeting with freshmen at all of Moscow's universities. Chechens are obliged to attend, because, for us, students and young adults must be called to special account,” Rustam Tapaev, chairman of the Moscow Union of Chechen Youth, said in an interview to the Izvestia newspaper.

According to Tapaev, the purpose of educational talks with diaspora leaders is to shatter the illusion for young Chechens that Moscow is too large for their actions to be noticed in the capital or back home.

“Here everyone is supervised, and bad behavior will be addressed through the authority of respected persons and parents,” said the chairman of the Union of Chechen Youth. “We do not know whether our fellow Chechens were to blame for the incident with the journalist, but we won't take any measures until all the circumstances have been clarified.”

The skirmishes in the capital have attracted the attention of Dmitry Medvedev. Commenting on the “Dagestani wedding,” Russia's prime minister called for “all members of society to be brought up from an early age in a proper cultural manner.”

“This applies to all republics: Dagestan and the North Caucasus as a whole. It applies to Siberia and Moscow; it applies to all regions of our country,” underscored Medvedev during a recent trip to Dagestan. “Otherwise, ethnic clashes and problems will ensue.”

The idea to focus on educational initiatives for the youth was supported by the chairman of the State Duma Committee on Nationalities, Gadzhimet Safaraliev.

“Such practices do indeed exist, including in the Caucasus. Young migrants take their customs to places where they are frowned upon. Of course, a lot of time needs to be spent on explaining, clarifying, and generally raising young people's level of culture,” said Safaraliev.

Dmitry Demushkin explained to Izvestia that Chechen leaders have been holding meetings and talks with people from their native land for a long while now, both in Moscow and at home.

“An agreement was reached last year, during our visit to Chechnya,” Demushkin said. “The Chechen authorities are working to improve the image of young people. The process is long, but essential.”

According to Duma Deputy Vadim Tyulpanov, law enforcement agencies must also take control of the situation; he has already filed a request with the Prosecutor's Office to investigate the disturbance in the subway.

“I am afraid that such incidents could become commonplace in the future, and, God forbid, foment nationalist sentiment, triggering ethnic strife. To prevent this, the matter needs to be resolved at the highest administrative level and, in this case, that is the General Prosecutor's Office," said Tyulpanov.

Some representatives of the diaspora are also preparing for action. The Caucasian youth organization “Children of the Mountains” have come up with the idea of ​​forming interethnic units to patrol the streets.  The activists believe that joint squads of Russian and Caucasian youths can help avert unpleasant incidents.

“The key is for them to explain to their compatriots how to behave in public and to discuss various legal aspects. Knowledge of the law can safeguard youngsters from the negative consequences of getting into a scrape, or, on the contrary, assist in the event that they themselves are unlawfully victimized. The voice of reason is often heard more clearly when it comes from one of 'your own' — it has a more profound effect on your mentality,” said Bersan Zaitov, chairman of the Moscow branch of Children of the Mountains.

Moscow is the most ethnically diverse city in Russia, and attempts to find a universal formula to prevent racial conflict have already been made.

For example, in 2010 the municipal authorities announced a plan to cooperatively develop a set of rules called the “Muscovite's Code” with the city's diaspora. The text is designed to help new arrivals to the capital stay out of trouble. The document was intended to codify the “unwritten rules of conduct” that relate, in particular, to the cultural traditions of the ethnic groups in question.

“For example, do not slaughter rams outside in the communal yard, do not have barbecues on balconies, do not to walk around the city in national clothing, speak Russian,” were some of the proposed guidelines in the text.

The first draft of the document provoked a wave of criticism in the media. A revised version of the “Muscovite's Code” has yet to appear, and it seems the media scandal has shelved the project for now.

The article is based on the information from the Izvestia newspaper and Kommersant Daily.