Kashmir pops up at the UN 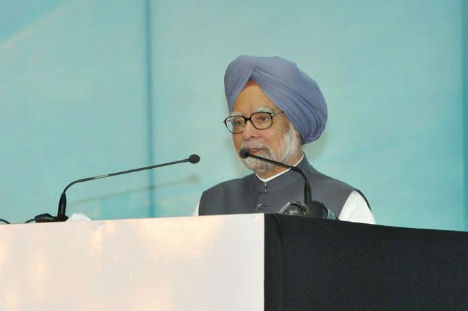 The Pakistani move to rake up Kashmir issue doesn’t help create conducive setting for a visit by Prime Minister Manmohan Singh to Islamabad.

Is the Kashmir issue back in the United Nations? The answer is “Yes” and “No”. It might come as a surprise, but last week Pakistan President Asif Zardari did raise the Kashmir issue in his address at the UN General Assembly.

Equally, External Affairs Minister S. M. Krishna responded in kind, but he spoke mildly and more for the purpose of record than taking umbrage at Zardari. Conceivably, Krishna could have added, if he wished to be combative, that the only unresolved issue is about Pakistan-Occupied Kashmir. Or, he could have chided Pakistan to concentrate on the festering wounds in Baluchistan and its “lawless” tribal tracts, or, to train eyes on the recent Afghan demarche at the UN Security Council about its erratic conduct.

But he didn’t. Later, Krishna also chose to annotate his speech, further rounding off any residual cutting edges in it. All in all, the Indian response was a calibrated one, keeping in view Zardari’s acute political compulsions of grandstanding at a delicate juncture in Pakistan’s domestic politics when he is at odds with the “deep state” for a variety of reasons.

The Pakistani move to rake up Kashmir issue doesn’t help create conducive setting for a visit by Prime Minister Manmohan Singh to Pakistan, which it is apparently keen about. Curiously, is there going to be a visit? The Indian army chief General Bikram Singh’s recent statement underlining the strategic imperative for India to keep its troop deployment on the Saltoro Ridge could have come as a reality check.

At any rate, the focus of regional politics isn’t going to be on Kashmir issue, no matter what Zardari said. Washington lost no time reaffirming its stance on the issue. At any rate, India’s own priorities lie elsewhere, as evident from the extraordinary meeting of the “militant” Kashmiri students and India’s most prominent corporate chieftains that Rahul Gandhi put together in Srinagar this week. Ratan Tata summed up, "What Mr Gandhi has done is not open a window but open a door."

However, there is a plausible explanation for Zardari’s outburst. Consider the following. The emerging picture is that the US-India strategic partnership is all set for a big acceleration. Amongst other things, the US has come to share the perception of Indian pundits that Pakistan isn’t going to give away its “strategic assets” in Afghanistan anytime soon.

Surely, something has to give way. One possibility is that the NATO packs its bags and troops out of the Hindu Kush with bowed heads. But then, it will also mean the end of the western alliance. Clearly, it is not on the cards.

Meanwhile, a strong case can be made that the US thinking is increasingly imbued with a sense of realism. The decision by the George W. Bush administration to participate in the internecine strife (“civil war”) in Afghanistan was a mistake. The Taliban as such never really posed a threat to the US’ national security and Washington acknowledges that it should be left to the Afghans to work out their future political dispensation. On the other hand, it is in the interests of the US and its allies that it remained committed to preventing Afghanistan becoming a revolving door for international terrorism. For matching these aspirations, the US will strive for a deal with the Taliban as a legitimate Afghan group participating in the stabilization of that country.

The fundamental mistake of the 1990s was that the US kept spurning the Taliban’s overtures for a normal relationship and thereby pushed them into the al-Qaeda camp, whereas the imperative today is to bring the Taliban into mainstream political life.

Suffice to say, the present stalemate in Afghanistan is a deceptive phase. All things taken into account, therefore, the move by the Pakistani “deep state” to bring up Kashmir issue at the UN suggests a degree of nervousness deep down about the shape of things to come in regional security. Simply put, the growing understanding between Washington and New Delhi unnerves Pakistan. Zardari’s outburst at the UN Headquarters coincided with the first meeting of the newly formed US-Indian-Afghan “trilateral” in the same city within the week.