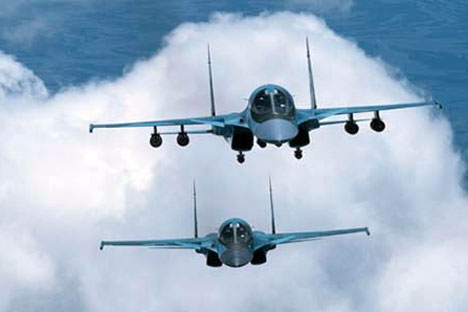 The aircraft would virtually be an insurance policy against aerial threats from such aircraft as the J-10s and the F-16s.

Defence ties have clearly been the engine of India-Russia bilateral relationship for over half a century now. The same engine is set to be roaring once again when Russian President Vladimir Putin undertakes a visit to India this month-end. The two countries are going to sign numerous agreements – at least half a dozen, according to knowledgeable sources – and one of these is going to be a $3.77 billion deal for the supply of 40 SU-30MKI Russian fighter aircraft to India.

The new Super Sukhois deal is going to be on the front burner when the India, Russia Inter-Governmental Commission on Military-Technical Cooperation meets in New Delhi next week. The ultimate goal of the two defence ministers at the two-day meeting later this week would be to thrash out a text of which even a comma or a full stop does not have to be changed and the two ministers sign the deal in the presence of Putin and Indian Prime Minister Manmohan Singh during their delegation-level talks in New Delhi on November 1. This is going to be a major mission objective of the Indiana and Russian defence ministers in the coming days.

The deal for the fighter aircraft under the MMRCA programme is all set to be sewn up when Putin is meets his Indian interlocutors at the highest level on November 1 in New Delhi’s Hyderabad House. The fighter aircraft in question are described as the ‘Super Sukhois’. The adjective “super” given to these aircraft is because these aircraft have stealth features, a new cockpit, state-of-the-art radar and features which will enable each aircraft to carry such heavier weapons load as the air-launched version of the jointly developed Indo-Russian BrahMos cruise missile. The first delivery of this much-improved fighter aircraft is expected during 2014-15.

The Russian-supplied MiG21s have so far served as the backbone of the Indian Air Force. This is set to change once the Super Sukhois’ supply from Russia starts trickling in. The Mig21s are an ageing lot and India is set to phase out as many as 120 of them within the next couple of years. The delivery of the Super Sukhois will increase the Indian fleet of Sukhoi’s to 270 aircraft, an impressive figure for any air force in the world.

India has first begun buying off-the-shelf Su-30s from Russia in 1997. But, in 2000, began developing Sukhoi Su-30MKIs at home after Hindustan Aeronautics Limited began production under license from Sukhoi Design Bureau. The Su-30MKI has considerable Indian components in it.

The urgency for signing a new deal for 40 Super Sukois emanates from the fact that the proposed deal for 126 MMRCA aircraft is getting delayed to an unnerving extent by the Indian parameters and the Indians are still far from a stage where they sign the contract with France's Dassault. The Russian Super Sukhois, therefore, is an immediately doable thing which would also send a signal to the international community. In fact, major global arms manufacturers companies like Dassault would be handed out a stern message if India were to sign the new deal for the Super Sukhois with the Russians, as per the Indian strategic thinking.

Moreover, the Super Sukhois fit the bill perfectly for the Indians because the IAF is already flying the Sukhoi and its personnel are absolutely comfortable with the Russian aircraft. Also, it would be a master move by the Indian strategic establishment, not unlike a game of billiards where one hits the blue ball to actually net the red ball. The signal to Dassault would be unmistakable: sign on the dotted line, or else…

Dassault CEO Charles Edelstenne has already showcased Rafale’s 100 percent made-in-France tag as a trump card to win the MMRCA order from the Indians. He has already dangled a carrot before the Indians that Dassault would keep all its high-end technologies, jobs and value-addition within India and deliver as per India's needs and demands, but clearly the Indians are gunning for more. Indubitably, the new Super Sukhois deal will prove to be a major tactic for the Indians for bringing Dassault on the same page.

What Super Sukhois Will Do?

The Super Sukhois would be a game changer for the Indian skies. The aircraft would virtually be an insurance policy against the aerial threats from China and Pakistan from such aircraft as the J-10s and the F-16s respectively. China and Pakistan and are not unmindful of this as the IAF has already started deployment of the Sukois at the forward bases near their borders. Quite recently, India has replaced its ageing fleet of MiG 23s with a squadron of SU-30MKIs on a forward base near the India-Pakistan border.

The Indians have been flying the Sukhois from 1997 onwards when India first procured its first off-the-shelf SU-30s from Russia and gradually developed Sukhoi Su-30MKIs at home after Hindustan Aeronautics Limited began production under license from the Sukhoi Design Bureau. The Indians are, as said earlier, quite comfortable with the aircraft which has a considerable share of Indian components in it.

The new deal for Super Sukhois is an idea whose time has come now.