The Voice of Russia
Alexandra Zacharova 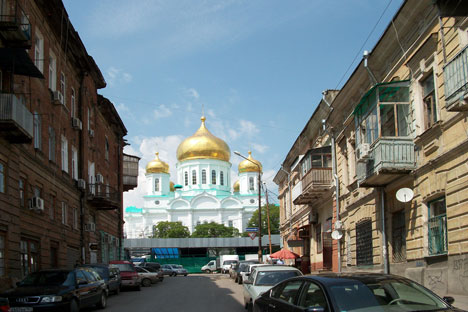 Rostov-on-Don will be one of the cities that host the Football World Cup in 2018. Source: Press Photo

Visitors coming to the southern Russian city for the World Cup will get a taste of Cossack culture and a chance to hop between Asia and Europe.

The city of Rostov-on-Don in Russia’s south will be one of the cities that host the Football World Cup in 2018. The city’s authorities are planning to build a stadium with a capacity of 45,000 for the championship. The city is also preparing a cultural programme for visitors to the tournament. During the breaks between the matches, the guests will be able to get acquainted with the culture of Cossacks.

The Don River, on which the city stands, divides it into two parts. Traditionally, it is considered that the border between Europe and Asia in Russia’s south coincides with the Don River, and, thus, residents of Rostov-on-Don call one part of their city “European,” and the other “Asian”.

The hotels for the championship’s guests will be built in the city’s European part, next to the Drama Theatre. The theatre was built in the 1930s, and its miniature is even present in the British Museum in London as a typical sample of architecture in the constructivist style of that epoch.

The stadium will be built in the city’s Asian part. As it was already said, it will have 45,000 seats, and it has been calculated that its construction will cost $400 million. After the championship, the stadium’s tribunes will be partially dismantled, and only about 25,000 seats will remain. This will be enough for holding matches not of international significance, but between Russian teams.

“The population of Rostov-on-Don counts more than 1 million people,” the Chief Architect of the Rostov region Alexey Polyansky says. “However, at present, the majority of them live in the city’s European part. With the appearance of the new stadium, the city’s Asian part will start to develop faster.”

“Don’s western bank is high, and the eastern bank is low,” Polyansky says, “and there are few tall buildings in Rostov-on-Don’s eastern part. In fact, the new stadium will be the first large facility in the city’s eastern part – but not the only one. Rostov’s authorities are even planning that with some time, the city’s centre will move to its Asian part.”

The region of the Don River is known as a traditional place of living of the Cossacks. Not far from Rostov-on-Don, is the village of Starocherkasskaya, which has the reputation of the unofficial capital of the Cossacks. The residents of this village carefully preserve centuries-old Cossack traditions.

The head of the Rostov-on-Don’s Department of Tourism Olga Dudkina says: “One can feel the Cossack spirit everywhere in Starocherkasskaya. Every house there is unique.”

“You can get to Starocherkasskaya from Rostov-on-Don by bus, by car or by a small motor vessel. I believe that Cossacks are not some special nationality,” Dudkina continues. “Being a Cossack is rather having a special kind of mentality than belonging to a certain nation. For centuries, Cossacks have been very freedom-loving people, but, at the same time, they served the Russian tsars by guarding the empire’s borders.”

Among other things, the Rostov region is famous for its fish soups, cooked from various kinds of fish according to old Cossack recipes. You can enjoy these soups in many restaurants of Rostov-on-Don.

One can get to Rostov-on-Don by plane, by train or by sea. The city stands on the Azov Sea, which has a connection with the Black Sea, and the latter, in its turn – with the Mediterranean Sea. Thus, Rostov-on-Don is sometimes called “a port of five seas”.

Plans are on to build a new international airport in Rostov-on-Don within the next few years. The airport will be able to handle more than 10,000 passengers a day.