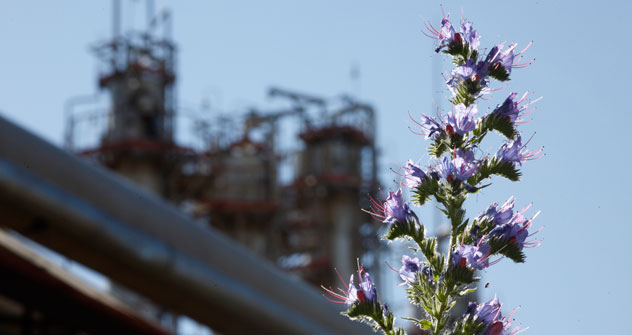 SIBUR owns 22 production sites across Russia, supplying more than 2,000 customers in the energy, automotive, construction, retail and other industries in over 60 countries. Source: Sibur.ru

A joint venture between Reliance Industries Limited (RIL) and Russia’s SIBUR is constructing a butyl rubber plant in Jamnagar.

Jamnagar, the oil city of India, is preparing to host dozens of petrochemical engineers from Russia. The construction of a butyl rubber plant, a joint venture between Reliance Industries Limited (RIL) and SIBUR, Russia‘s largest petrochemical company, is expected to kick off in next six months.

The joint venture Reliance Sibur Elastomers Private Limited was formed in the beginning of 2012, although the project was announced earlier in 2010 during a visit of former Russian president Dmitry Medvedev to India. RIL holds a 74.9 percent stake in the joint venture, while SIBUR enjoys 25.1 percent share.

While Reliance will construct the plant, SIBUR will provide the technology. SIBUR will handle implementing the technology, launching the plant, and training Indian engineers and workers. “We expect that after two years from the launch, the factory will be fully operated by Indian manpower,” says Evgeny Griva, CEO of SIBUR Petrochemical India, the company’s subsidiary in India.  The subsidiary recently opened an office in Mumbai to coordinate the Jamnagar project and find some new opportunities in Indian petrochemical industry.

SIBUR owns 22 production sites across Russia, supplying more than 2,000 customers in the energy, automotive, construction, retail and other industries in over 60 countries. In 2011, SIBUR generated approximately $1.9 billion in net income on nearly $7.7 billion in revenue, according to the company’s financial report. Bloomberg estimates Sibur is worth more than $12 billion.

The Jamnagar butyl rubber plant is expected to be launched in mid-2014. The facility will have a production capacity of 100,000 tonnes a year. About 75,000 tonnes will be supplied in domestic market, according to the current demand volumes. The rest may be exported to other Asian countries where demand for butyl rubber is also high, a RIL spokesperson told RIR. Investing $450 million, the joint venture expects to reach a turnover of $700 million in the first year of production.

“The setting up of domestic manufacturing of butyl rubber will fulfill a long standing demand of the Indian tyre and rubber industry and this investment is part of Reliance’s vision of emerging as a significant global player in the synthetic rubber business,” N. R. Meswani, Executive Director, RIL, said when announcing the Jamnagar project.

Reliance Sibur Elastomers will be the first manufacturer of butyl rubber in India. At present India’s demand for butyl rubber is created mainly by the tyre industry and is fully supplied by imports from North America, Central Asia and European countries, including Russia. However, having the world’s largest oil refining-cum-petrochemical site in Jamnagar built by Reliance in the last 10 years and having the combined capacity of 62 million tonnes opens a new opportunity of domestic production of butyl rubber.

“For India and RIL, this project is very interesting because of the existing oil refinery complex in Jamnagar, says Griva. “It was very interesting for Reliance to get such technology that will allow this refinery product to be used for growing the rubber market especially. Demand for butyl rubber that exceeds supply at times, can only be met with imports. So it is a very important step for India towards creating a new domestic market for butyl rubber manufacturing.”

He points out that as the automobile and therefore the tyre industry in India are growing extremely fast. The majority of Asian countries, including India, consume tube tyres while the rest of the world has been moving to tubeless tyres. This makes India a great market for the raw materials required for manufacturing tube tyres of which Bytul rubber is one. For Russia and SIBUR particularly this project is also a step forward to sharing its unique technologies and experience outside Russia.

“SIBUR has the most eco-friendly technology for butyl rubber production which is being used only at SIBUR’s Tolyattikauchuk plant in Tolyatty (Russia). No other butyl rubber manufacturers in Russia, CIS or Europe use this technology. For Russia it is a very important moment as while in other petrochemical segments we do compete with global leaders, in butyl rubber segment we are a step ahead having a very advanced and unique technology. This technology was particularly interesting for Reliance and has formed the basis for our joint venture,” Griva says.

To buy Iran’s oil, or not to buy, that’s the question…

The Indian petrochemical industry is presently valued at $40 billion and is expected to grow at 12-15 percent annually over the next five years, according to the Associated Chambers of Commerce and Industry of India (Assocham). Providing the foundation for manufacturing industries such as pharmaceuticals, construction, agriculture, packaging industry, textiles, the petrochemical industry has been one of the of the fastest growing industries in the Indian economy, analysts say.

The rubber market specifically provides a lot of opportunities for petrochemical companies as Indian automobile sector again seem quite optimistic after a small decline in growth.  According to various market reports, for the year 2010-11 the automotive industry generated a turnover of almost $5.8 billion of which 90-95 percent comes from the domestic market.

The value of new investment proposals zoomed up to $1.9 billion, close to the level seen back in 2008-2009, according to Centre for Monitoring Indian Economy (CMIE).

In general SIBUR operates across the entire petrochemical process chain from gas processing to the production of monomers, plastics and synthetic rubbers, as well as the processing of plastics. When asked about prospects for SIBUR in India and South Asia beyond only butyl rubber, Evgeny Griva said that with the Jamnagar project, SIBUR is trying to create an interest as a supplier of wide range of petrochemical products and as a source of advanced technologies in petrochemical industry.

“SIBUR’s interest in Jamnagar JV project apart from sharing sales and a license fee is the opportunity to develop the SIBUR name in India and Asia as a brand, as a supplier of a wide range of petrochemical products and as the source of advanced technologies in the petrochemical industry. Our recently opened subsidiary will not only handle the project in Jamnagar but first of all will be responsible for establishing the SIBUR brand in Indian market. Our task today is to start detailed research into South Asian markets to find new opportunities for SIBUR product and technologies in India and South Asia. All synthetic rubber products are of interest for India as many of them are  not produced domestically but need to be imported, however as of now we do not have a clear picture of which precise products or technologies are in demand in India and that is why we are studying the market,” Griva said.

SIBUR itself started its global expansion from China by signing a cooperation agreement with China Petroleum and Chemical Corporation (Sinopec Corp.), China’s top oil refiner, to establish a joint venture in Shanghai, China for producing nitrile butadiene rubber (NBR) and isoprene rubber (IR). The NBR and IR plants are expected to have an annual capacity of 50, 000 tonnes per year.

Earlier in 2012 SIBUR formed a joint venture with the Sinopec Group for the production of nitrile rubber in Krasnoyarsk (Russia).

“Not only SIBUR but Russia’s Rosneft too is building a $5 billion refinery in Tianjinin China, in JV with China National Petroleum Corp (CNPC). Rosneft is also developing a new petrochemical plant of 3.5 million tonnes per year in Russian Far East aiming to export 80 percent of its production to main targeted markets – Far East and South Asia”,  says Julia Voitovich, analyst of Investcafe.

Meanwhile some Russian industry experts point out that selling crude oil and gas presently generates 30-40 percent more margins for Russian companies than petrochemical processing especially production of ethylene, propylene and plastics. The trend even strengthened after Russia introduced so-called “60–66” tax regime that suggests cutting the maximum oil export duty to 60 percent from 65 percent, while export duties on light and heavy oil products were unified at 66 percent of the oil export duty. Adding to the point expensive credit resources and outdated facilities requiring more investments in modernisation to be able to cater to domestic demand, extensive global expansion at present might not be the first priority for Russian petrochemical companies. Nevertheless the potentials of Indian markets and high the demand in technologies make SIBUR’s pioneer example in India lay the good groundwork for future initiatives.