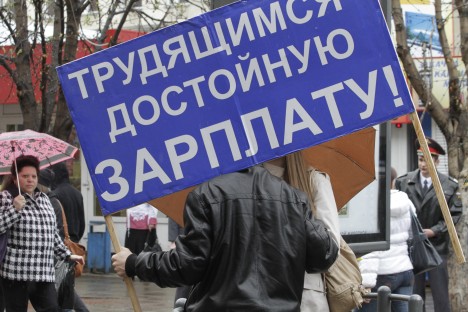 Russian trade unions criticize the country's pension system and reform of the Labor Code. Pictured: A participant of a rally with the motto which reads: "Good Wage for Workers!" Source: ITAR-TASS

Russian trade unions have called on Vladimir Putin to change the country’s social policy. The main targets of criticism are the pension system and reform of the Labor Code. The first trade union protest rally took place last week.

The Russian Labor Confederation, which brings together more than 20 Russian trade unions, is set to stage street rallies to demand a change of the country’s social policy. The first protest events took place on Oct. 7, the president’s birthday.

The trade unions are planning to protest against what they consider to be “the dismantling of the last social guarantees that Russian citizens still have.” In the opinion of the Russian Labor Confederation, “dismantling” policies include the draft reform of the pension system, reform of the Labor Code and proposals to alter compensation for employees in the public sector.

“With the planned rallies, we are voicing our disagreement with hardened social policy and attempts at neo-liberal revision of labor legislation,” the executive committee of the Russian Labor Confederation said.

According to the Confederation’s leader, Boris Kravchenko, if the demands of the trade unions are ignored, they will call for the resignation of the government ministers responsible for social policy. The Confederation intends to coordinate further protest activities with the groups fighting housing and utilities problems – ones which joined the “Marches of Millions” as part of the “Education Column” – as well as with other active citizens’ organizations.

Experts are divided on how the authorities will react. Director-General Dmitry Orlov of the Agency for Political and Economic Communications believes that, if the trade unions do not trouble the authorities with ultimatums, they may be able to join the dialogue on the problems that worry them.

Vyacheslav Danilov, Chief Editor of Liberty.ru, suggests that the trade unions would do better to bring in mechanisms such as the Public Chamber and the Human Rights Council, or to use their informal connections in the government. Otherwise, the Confederation’s demands are unlikely to be taken seriously, Danilov believes.

Oleg Shein, an opposition activist and a Russian Labor Confederation leader, takes a different stance on the matter. He is convinced that only vigorous protests can yield results. In his opinion, the fact that the authorities fear social upheavals should play into the hands of the trade unions.

The proposed pension reform that the Russian Labor Confederation opposes would reduce the accumulated portion of the pension from 6 to 2 percent, increase insurance premiums for hazardous production facilities and peg the size of the pension to seniority. Many experts note that the last measure effectively raises the pension age, since “seniority” renders one eligible for the maximum pension only by the age of 60–65. With regard to the Labor Code reform, the trade unions are worried about the notion of lengthening the work week to 60 hours, as well as proposals that would make it easier for the employer to sack inefficient workers or change the terms of the contract in times of crisis.

The Russian Labor Confederation is a national association of trade unions that positions itself as an alternative to the Independent Trade Union Federation of Russia, which is Russia’s main labor association. The Confederation is comprised of more than 20 structures that represent workers in various fields, from the film industry and television to the mining business. The Confederation includes several so-called “militant” trade unions of seamen, railway workers and air traffic controllers. The Confederation’s leaders have repeatedly stressed the differences between their organization and the Independent Trade Union Federation, emphasizing the fact that the former’s trade unions have been created at the grassroots level and are fully controlled by the workers

This report draws on material from RBC Daily, RIA Novosti and Lenta.ru.