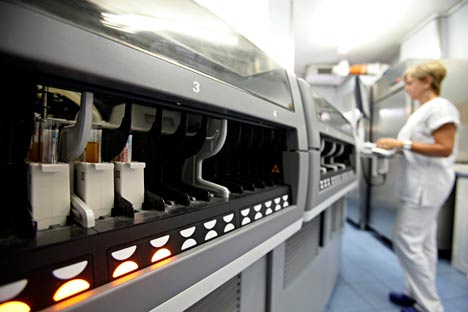 The rumored Abbott Laboratories deal could be one of the top three largest acquisitions in the history of Russia’s pharmaceutical market.

A source at the Federal Anti-monopoly Service of Russia has revealed that one of the world’s largest pharmaceutical companies, Abbott Laboratories, has filed an application to acquire the NGO Petrovax Pharm. Abbott could become the first U.S. pharmaceutical company to own production facilities in Russia. According to experts, the size of the forthcoming acquisition is certain to place the deal among the top three in the history of the Russian pharmaceutical market.

Petrovax Pharm was founded in 1996 by a team of Russian flu-vaccine researchers, including Rem Petrov, Arkady Nekrasov, Natalya Puchkova, and Rakhim Khaitov. The current CEO, Professor Arkady Nekrasov, was awarded a government prize in 2002 for developing the drugs Grippol (an influenza vaccine) and Polyoxidonium (an immunomodulator). Both drugs are now part of the company’s portfolio.

In 2011, according to the research agency Pharmexpert, Petrovax Pharm’s turnover hit $98 million, placing it twelfth in the ratings of local manufacturers of pharmaceutical products. In 2008, a minority stake in the company was acquired by the European Bank for Reconstruction and Development (EBRD).

The buyer – Abbott Laboratories – secured ninth place in the 2011 ranking of largest pharmaceutical companies, with a turnover of $22.4 billion and total revenues reaching $38 billion. The group also produces medical equipment and employs more than 90,000 people in the United States.

When questioned about the circumstances surrounding the deal, Irina Gushchina, Abbott’s head of public affairs in Russia, replied that the company could not comment on the rumors. Petrovax Pharm also declined to comment. Based on data from the Unified State Register of Legal Entities, Abbott, which is seeking to acquire 62.5 percent of Petrovax, plans to buy shares belonging to the EBRD (25 percent), CEO Arkady Nekrasov (18.77 percent), and Natalya Puchkova (18.74 percent). The remaining shares are listed in the name of the company itself, which means that Abbott’s takeover would be complete.

The EBRD acquired its 25 percent stake in Petrovax Pharm for $27 million in 2008. At that time, the company's turnover, according to Pharmexpert, was $13 million – 2007’s bottom line. According to Yulia Nechayeva, director of strategic research at DSM Group, the price-to-sales ratio of these kinds of transactions is currently 2 or 3. Thus, given Petrovax Pharm’s present turnover of $98 million, the deal could be worth $196-294 million. David Melik-Guseynov, director of Cegedim Strategic Data, appraises the company at $250 million.

The acquisition would be among the three largest deals ever to take place on the Russian pharmaceutical market, alongside the buyout of Natur Produkt International by Canada’s Valeant Pharmaceuticals International for $180 million in spring 2012, and the purchase of Masterlek by Pharmstandard for $146 million in 2009. In all three transactions, the portfolio of the acquired company contained an anti-flu drug (Petrovax Pharm’s Grippol; Natur Produkt’s Antigrippin; Masterlek’s Arbidol).

David Melik-Guseynov is sure that the acquisition of the Russian company is politically motivated; it is intended to give Abbott a carte blanche in the Russian market, which includes active participation in the additional medicinal drug programs. Yulia Nechaeva agrees that, by securing production facilities and preferential treatment, Abbott aims to become localized in the Russian market, more so than it does to acquire 20 global medical patents. According to DSM, Abbott annually sells $430 million worth of product in a market worth $30 billion, and lags extremely behind its neighbor in the global top ten rankings, France’s Sanofi. In Russia, the company fails to make even the domestic top ten.

The deal would allow Abbott to become the only American company to own production facilities in Russia.