Memories from the home of Sukhoi 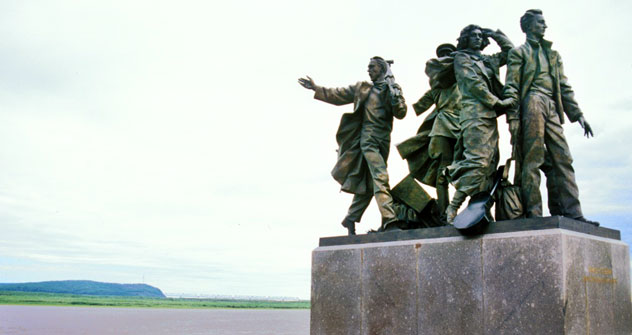 Komsomolsk-na-Amure is far off the beaten track and is not used to seeing visible foreigners despite housing a factory that makes world-class fighter jets.

A large number of the Sukhois flown by Indian Air Force pilots are manufactured at the KNAAP plant in the Russian Far Eastern city of Komsomolsk-na-Amure. The Soviet-built city witnessed a boom in the 1960s and 70s when several industries dotted the landscape and factory jobs were aplenty. Then came perestroika and the fall of the Soviet Union. For over a decade, the city fell on hard times and its reputation went for a toss.

The first time I decided to take a train on the Baikal-Amur Mainline (BAM) from Vanino in the Khabarovsk territory to Novosibirsk, which is deep in the heart of Siberia, I was given a newspaper clipping from ‘Sovetsky Sakhalin,’ the most widely distributed newspaper on Sakhalin Island. The article described the modus operandi of criminals who hit on Russians and foreigners alike when the train stopped at Komsomolsk-na-Amure, which was called the most dangerous city in the Russian Far East. “The train stops for 45 minutes there, but don’t get off,” a concerned friend told me. “Your bags may just vanish before you get back on the train.”

As it turned out, I had to get off the train since I had a run-in with an over-zealous policeman (narrated here). Far from being some bandit-infested town in decay, Komsomolsk-na-Amure, with broad tree-lined avenues had an air of pleasantness. Food items seemed to cost half of what they did in the bigger cities of the region and the pleasant lady at the corner shop used an abacus to calculate my bill!

A couple of winters later, I returned to the city for a weekend, again to the chagrin of well-meaning friends in Sakhalin, who asked me to be careful. So, where did this fear of Komsomolsk come from? Legend has it that Evgeny Vasin alias Jam, the most dreaded criminal in the Russian Far East, lived in the city and he terrorised gangs across the region. Jam and company allegedly took down the most powerful gang in Yuzhno-Sakhalinsk in the pre-Putin days. Jam was long dead by the time I visited the city, but such was his reputation that many outsiders avoided Komsomolsk.

I felt quite safe in the vibrant city but I was an attention magnet and my friends had to answer a lot of questions from curious onlookers. For a long time, the city had a “closed-zone” status and people from other Russian regions weren’t allowed in without permission, let alone a tropical person with an ‘I am a foreigner” tag written all over him!

One of the most popular places to spend a cold winter evening is the indoor pool in the city.  This was where I received a mixture of admiration, suspicion and curious looks. “What’s he doing here in Komsomolsk,” a middle-aged woman asked my host. “Gosti (visiting)?” The woman was shocked that someone in their right mind would visit the city, that too in December, when temperatures regularly fall under 30 degree below zero. “No one visits Komsomolsk,” she muttered.

In the sauna, a very “Soviet-looking” man gave us a few suspicious glances. When my friend asked me if it was too hot in there, I said that it felt like a summer day in Mumbai. That remark prompted the “Soviet-looking” man to burst out into laughter and he instantly warmed up to me. He turned out to be an engineer at the KNAAP factory that is now making the much-touted fifth generation fighter aircraft that will be used by the Indian Air Force.

Since I was just in the city for a weekend, I didn’t mind the attention too much. At that time, I lived in Sakhalin, where a foreigner was a dime a dozen and could go back to my relatively cosmopolitan home on Monday morning. It was common for foreigners to ski down the slopes of a popular resort above Yuzhno-Sakhalinsk, but in Lake Amut, on the outskirts of Komsomolsk-na-Amure, this was as rare a phenomenon as one could imagine. As I clumsily made my down the slope, I was stunned by the ovation from the small crowd.  A bit embarrassed, I took off my ski cap and acknowledged the cheers. Those were the same kind of cheers that I had earlier received at the city’s most well-known nightclub, Beverly, when I got dragged into some contest by an excited DJ. Where’s the harm in being a star for a weekend?

The real Russia lives in the so-called regions of the country. I don’t want to take anything away from Moscow and St Petersburg, but no one can claim to have seen Russia without crossing the Urals. The essence of Russian culture and traditions are better-preserved the farther away the region is from the capital. Given the relatively slow pace of change in the distant regions, it’s a relief to know that some parts of Russia will continue to feel like Russia for a long time to come.