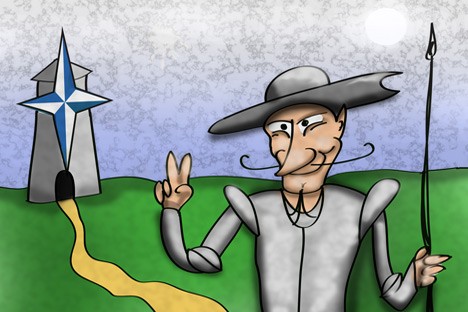 NATO today is neither a treacherous threat, nor a coveted partner to Russia. In fact, the oranization’s role is largely symbolic. Russia and the United States would do well to turn their gaze toward cooperation in Asia, instead.

The discussion, though not devoid of interest, followed all the usual patterns: the arguments and claims on both sides have barely changed. Considering that the world has changed beyond recognition over the past 15 years, this is rather odd.

NATO has always been at the center of Russian polemics. The traditionalists saw every move the organization made, in any part of the world, as being spearheaded against Russia.

For reformists, relations with the bloc were an indicator of whether the country was following the “correct” path toward becoming part of the “civilized world.”

The Communists, “lefties” and home-grown geopolitics experts suspect the Russian leadership of seeking to drag the country into NATO, while the liberals think that hypothetical membership in the organization will seal the country’s “civilized choice” in favor of “modernization.”

Today, the real NATO fails to meet the expectations of both its friends and its foes. It is the world’s largest military-political bloc, and possesses huge potential. In spite of numerous attempts to formulate a new mission, it has failed to do so.

The organization is weakened by a lack of discipline within the bloc (Western Europe, Eastern Europe and the United States have different perceptions of security challenges), ideological erosion and, more recently, a chronic shortage of funds.

The attempt to replace quality with quantity has met with stiff Russian resistance. Afghanistan – the first operation outside of NATO’s traditional zone of responsibility – has undermined the organization’s image as the world police.

It is hard to imagine how Washington could mobilize its allies for another such operation. Even more so, since the likely theater of military-political actions in the coming decades will be the Asia-Pacific region, where the United States would need an entirely different set of partners.

For the West, NATO now plays a largely symbolic role as proof that there is still something immutable (Transatlantic relations) and sacred (shared values) in this chaotic world.

Russia’s attitude towards NATO also harks back to Soviet suspicion and post-Soviet admiration of the past. The problem is that, outside this area of nostalgic perceptions, the practical value of these relations is questionable.

Afghanistan is thought to be a sphere where Russian and NATO interests coincide. There is some common ground, as both sides, each for their own reasons, are interested in a stable Afghanistan. The main task for NATO, however, is to keep the situation in the country under control over the next two years, to ensure the withdrawal of the bulk of Western troops.

What happens next is of little concern to European states. The U.S. would not object to preserving a significant presence in Afghanistan, but it would not be the end of the world if this did not happen.

Russia is concerned about long-term prospects and, in some ways, would like NATO to stay there longer. The Western coalition will do nothing to fight drug trafficking, but, even so, NATO forces ensure a fragile balance there. Thus, cooperation is a matter of expediency, rather than long term interests.

Interaction between Russia and the U.S. could develop a long-term agenda, if it focused on the Asia-Pacific region. The Euro-Atlantic space is burdened by the tradition of Cold War confrontation and has, in any case, turned into a strategic periphery.

One can go on discussing the fate of CFE (Treaty on Conventional Armed Forces in Europe), the future of the OSCE (Organization for Security and Cooperation in Europe) and the prospects of Euro-ABM until none but professional negotiators are interested in it.

But it is better to turn our gaze toward Asia, where a lot of interesting and alarming things are happening: from the economic boom to multiplying territorial conflicts, the build-up of armaments and changes in the balance of power.

Russia and America have fewer bones to pick and less negative baggage in the Asia-Pacific region; and NATO – that reminder of ideological confrontation – is irrelevant, if only for geographical reasons.

It is time to strip NATO of the aura that shrouds it in Russian discourse. The organization today is neither a treacherous threat nor a coveted partner. Its status is rather similar to that of the Council of Europe: it is important to work with this organization in terms of the overall perception of Russia in the West, but it does not make a fundamental difference.

The same is true of normal relations with NATO.

Fyodor Lukyanov is the Editor-in-Chief of the journal “Russian in Global Affairs.”