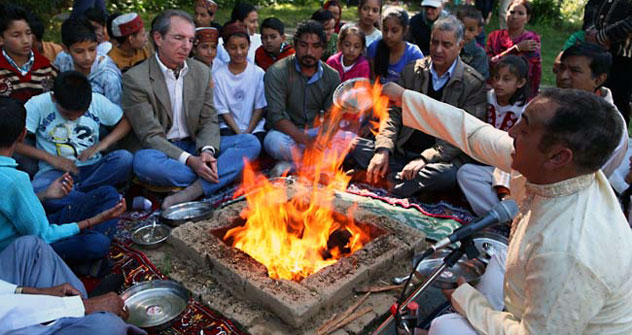 A shanti puja was held next to the memorial stone set up at the samadhi, where Nicholas Roerich was cremated in 1947. Source: Russian Embassy in New Delhi

The celebrations started in a traditional Indian manner with a prayer for peace. A shanti puja was held next to the memorial stone set up at the samadhi, where Nicholas Roerich was cremated in 1947. Adults and children from Naggar and local villages, numerous guests from India and abroad gathered under the canopy of lindens planted here by the remarkable Russian family.

The ceremony of hoisting Roerich’s Peace Banner, Russian and Indian flags took place near the house-cum-museum on the green terrace facing the Kullu valley. The honour was granted to Naggar’s oldest citizen, seventy nine year old Sohan Kaistha, who once met Svyatoslav Roerich, and nine year old Pratharn together with seven year old Jayanvi, who study at the Elena Roerich Art College. “Through this symbolic act we want to uphold continuity in generations of Naggar citizens in their commitment to preserve this god blessed place equally dear to Russians and Indians,” said Om Chandra Handa, universally acknowledged scientist who was appointed as a new IRMT director this September. 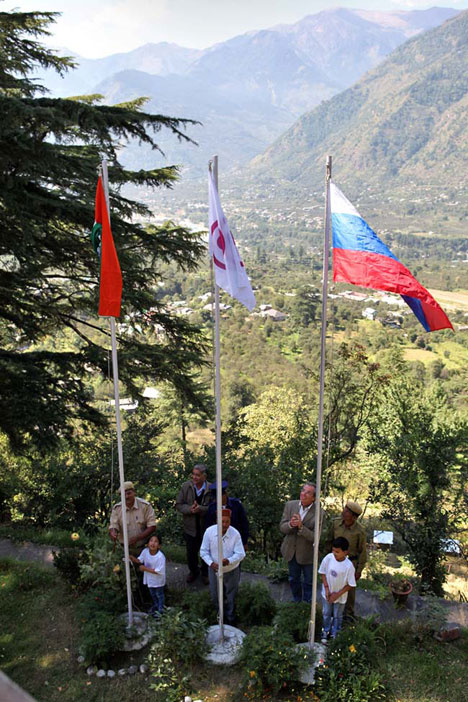 Alexander Kadakin, the Russian Ambassador to India, delivered a welcome speech to the participants of the celebrations, noting that this year has a special meaning to the history of the estate. Seventy years ago in May 1942, Jawaharlal Nehru and his daughter Indira visited Roerich in Naggar. They discussed the necessity to set up an Association of Friendship between the two nations. “Thus the Roerich estate in Naggar became the cradle of Russian-Indian friendship and a spiritual bridge that unites peoples of our two great nations,” Ambassador Kadakin said.

This year marks yet another notable date, the 110th birth anniversary of George Roerich, a renowned orientalist, linguist, ethnographer, and archaeologist, who for almost ten years headed the Urusvati Institute of Himalayan Studies established by the Roerichs here in 1928. “It is time to revive Urusvati,” the Russian ambassador said. “Recent months have seen a great deal of labourious activities by Russian and Indian experts supported by the Government of Himachal Pradesh aimed at transforming the Roerich estate into a genuine centre of spirituality, enlightenment and science.”

Students of the Roerich Art School run by the IRMT presented a cultural programme, featuring classical music compositions and dances as well as folk songs from the Kullu Valley. The audience warmly greeted young artists with enthusiastic applauses.

“It is heartening that the Russian-Indian hearth of culture established twenty years ago still thrives transforming into a world-class museum complex,” said Sergey Karmalito, senior counsellor of the Russian Embassy. “The Russian side along with Indian friends will actively support this noble initiative.”

The festivities culminated in the gracious ceremony of inaugurating an exhibition by Indian artists Ganesh Bodh and Ambika Katharia who get their inspiration from the creative legacy of Nicholas Roerich.