Pussy Riot member freed for lack of participation in protest 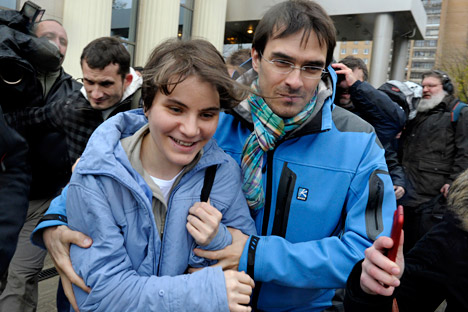 Pussy Riot band member Ekaterina Samutsevich (pictured left) was released from custody yesterday, while two other participants of the band will be sent to a medium-security prison camp. Source: AP

The Moscow City Court has partially overturned the verdict in the Pussy Riot case, releasing activist and band member Ekaterina Samutsevich. Her two band mates will remain in prison.

Pussy Riot band member and political activist Ekaterina Samutsevich has been freed after an appellate hearing while her fellow band members remain in prison. The three women had been sentenced to two years in prison for their controversial performance at the Cathedral of Christ the Savior in Moscow.

Moscow City Court: Pussy Riot could have received 7 years in jail if they didn't have children

Samutsevich’s sentence was overturned because she was trying to get her guitar out of its case and did not make it to the altar in time for the protest performance. She was grabbed by security before she could participate.

Pussy Riot performed a so-called “punk-prayer” entitled “Our Lady, chase Putin out” at the Cathedral of Christ the Savior in late February. A video of the performance was posted online and the group was reviled by some as blasphemers and extolled by others as martyrs at home and abroad.

The three band members, Nadezhda Tolokonnikova, Maria Alekhina and Ekaterina Samutsevich, had been convicted in Moscow’s Khamovnichesky District Court on August 17. The sentences handed down to Alekhina and Tolokonnikova were sustained at the October 10 appellate hearing, while Samutsevich’s was overturned and replaced with a two-year suspended sentence.

“She remained on the solea for around 15 seconds. She wasn’t singing, praying or jumping, and she didn’t even have the time to get a guitar on her shoulder. The video recording confirms as much,” the young woman’s lawyer, Irina Khrunova, said at the October 10 hearing.

The Pussy Riot defendants testified at the appellate hearing that their performance was not directed against religious people, and they apologized to those who had been offended by their action. “I don’t harbor any religious hatred, and I never have. And there was none in our performance either. I am sorry if we unintentionally hurt anyone’s feelings with our actions,” Tolokonnikova said while asking the court to repeal the guilty verdict.

“Perhaps our form of protest was indeed unacceptable for society; perhaps it is not ready to accept a punk action at the Cathedral of Christ the Savior…. We didn’t want to offend anyone,” Alekhina added.

The punk prayer at the Cathedral of Christ the Savior caused an outcry not only in Russia, but also abroad. The band members have even been nominated for the prestigious Sakharov Prize awarded by the European Parliament for defending human rights. However, the nomination drew a negative response not only from the Russian government, but also from the opposition. According to human rights activists, there are prominent figures in the protest movement who deserve the prize more than Pussy Riot.

Defense attorneys for Tolonnikova and Alekhina also seek their release. Attorney Mark Feigin said he would appeal the verdict to the Presidium of the City Court and to the European Court of Human Rights.“I don’t understand the court’s differentiation; it’s unclear how their roles and circumstances materially differed. We had reason to expect the release of all three defendants,” he said.

The women and their lawyers maintain that the court’s ruling has not caused any conflicts within Pussy Riot. Experts observing the trial agree. “I believe this decision was approved within Pussy Riot. I could be wrong and I could be criticized for this point of view, but somehow I’m sure of that,” Kommersant FM political observer Stanislav Kucher said.

Lawyer and member of Russia’s Civic Chamber Anatoly Kucherena didn’t see any problem in the fact that the Moscow City Court commuted Samutsevich’s sentence while upholding the sentences for the other two. “That’s exactly how a court should behave. If the court found that Samutsevich played an insignificant role, that’s the kind of verdict it should have handed down,” he told RIA Novosti.

“The court’s job is to study all evidence in the case fully and comprehensively. The change of verdict for Samutsevich occurred because the judges differentiated the defendants’ culpability by the nature of their acts and the degree of their guilt,” Irina Yarovaya, chairperson of the State Duma Security Committee, confirmed.

The article is based on combined reporting by RIA Novosti and Kommersant FM.