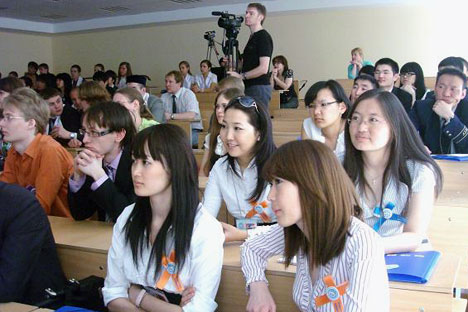 Denis Kravchenko, co-chairman of the the Shanghai Cooperation Organisation's (SCO) Youth Council, and deputy governor of the Pskov region talks to Russia & India Report about the upcoming forum in Belokurikha in the Altai Region.

RIR: The main organiser of the forum is the Shanghai Cooperation Organisation (SCO) Youth Council. Can you fill us in on that organisation?

The SCO Youth Council is three years old. During this period, we have become a real team, carrying out effective work on priority issues. Together we have held more than 30 events to promote youth cooperation in the SCO space.

The more notable of these were the Neighbours youth camp, a series of round tables on various issues: The role of Russia in the Shanghai Cooperation Organisation, Youth Entrepreneurship in the context of Border Cooperation,  Development Prospects, the SCO Youth Moscow Business Dialogue, the Student Spring International Festival and other events, many of which have become annual affairs.

RIR: The idea of holding the forum in Altai was proposed by President Vladimir Putin. Is it likely to be a milestone event?

Definitely. The SCO Youth Forum will be the biggest event in the history of our council. As Vladimir Putin said, expanding economic cooperation should be a constant SCO priority. To this end, we are concentrating on promoting joint projects that interest small and medium-sized enterprises, the Altai forum being one such event.

One of the key areas of cooperation among SCO states is cross-border cooperation, because the closest economic and cultural links exist between the border regions of the Shanghai Cooperation Organisation countries. We should also bear in mind that the main subjects of cross-border economic cooperation are small and medium-sized enterprises.

The forum will not only serve to strengthen economic, cultural and educational ties between the border regions, but will also give fresh impetus to the search for new and interesting ideas and joint projects.

I must stress that the main aims of the forum are to exchange experience between businessmen in the SCO region; to support entrepreneurial activities – specifically those of medium and small enterprises; to support the activities of Russian businessmen abroad; and to commercialise inventors’ activities.

RIR: What do the organisers hope to achieve with the forum?

The Shanghai Cooperation Organisation’s (SCO) Youth Council was formed at the behest of Vladimir Putin at the group’s summit in Shanghai in 2006. The concept of the council was presented in May 2007 and a statement approving its creation was signed in October of that year.

The council’s objective is to deepen cultural and educational links among the member countries and promote international youth cooperation in various fields. Kyrgyzstan currently holds the presidency of the SCO Youth Council.

RIR: The forum will be attended by more than 300 young businessmen from SCO member states…

That is correct. Among the participants will be prominent businesspeople as well as little-known entrepreneurs from Russia, China, Kazakhstan, Kyrgyzstan, Tajikistan, India, Iran and Belarus, who will talk about how their businesses were formed and how they developed. There is an impressive range of speakers. India is represented by Anil Ambani, head of Reliance Anil Dhirubhai Ambani Group.

RIR:  What in your opinion will be the highlight of the forum?

Leading Indian entrepreneur in Moscow talks about business in Russia

The event has a completely new format. There will be no official sessions. Leading entrepreneurs in the SCO region will hold lively conversations – a direct dialogue with beginners – on how they started their business and what problems they faced. Listeners are free to ask anything they like and propose new ideas. In effect, these will be master classes. We are also considering internet broadcasts to enable more people to take part. Businessmen will get valuable first-hand information, discuss topical issues, acquire useful skills during training sessions and meet new people.

RIR: We know that young innovators will be on hand to share their ideas.

Yes, young innovators will have a chance to demonstrate their developments to businessmen whose entrepreneurial flair will enable them to judge whether the ideas are feasible. It is very likely that some of these businessmen will be willing to commit energy and resources to implementing promising projects in Russia, China, India or other SCO countries.

RIR: And finally, is there anything you would like to say to the participants in the forum?

The SCO Youth Council has reached a stage when it can organise such big events as the upcoming forum. We have tried to bring in those who have something to tell. If the forum goes down well and gets positive feedback, we hope to make it an annual event.