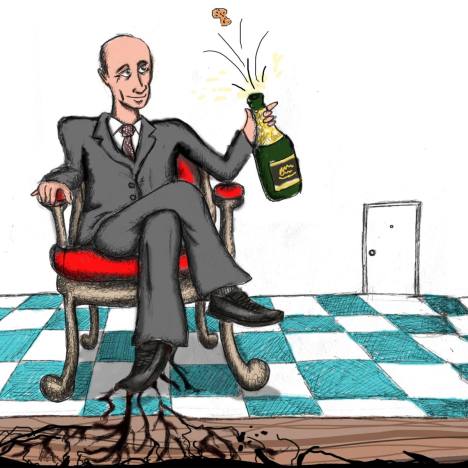 On his 60th birthday, Russia President Vladimir Putin was one of the most influential politicians on the planet, someone as idolised as he is demonised. Both in Russia and abroad this man is gradually turning into a brand, a concept or a political product that means different things to different people.

Two years ago Forbes magazine put Putin in second place on their list of the most influential global politicians – after Barack Obama, but ahead of China’s leader Hu Jintao. Of course this is nonsense. The statistics leave very little doubt that the leader of China wields more influence on the international stage than Russia’s president does.

But Putin’s presence and personality is strong enough for him to be seen separately from the country he rules. And this is not thanks to anything he’s done or hasn’t done. It is simply that Putin has come to be a reflection of the general global situation, a symbol (positive for some, negative for others) of the gloomy transitive state that the world is in.

Putin came to power promising stability for Russia, and this happened at a time when the world, that had just started celebrating the end of the Cold War (a victory for the West and of Western ways), stood on the brink of economic meltdown. Uncertainty grew as institutional structures, ones everybody took for granted, collapsed before our very eyes.

The West’s feverish attempts to prop up the global system, built according to Western models, only led it to a breaking point. As the world was united and ‘globalised’ like never before, the consequences of one person’s (or company’s) mistakes were felt everywhere.  And so the stabilisation process that was going on inside Russia was out of keeping with the situation in the outside world. In other words, Putin stood for the polar opposite of the general trend.

Many people see Putin as the ‘archetypal’ enemy of progress, a symbol of outmoded ideas and old-fashioned approaches. It would seem that the Russian president himself exists in a state of permanent barely-disguised rage against the policies of the world’s powers. Such policies appear to intentionally stir up the international situation, shaking the very foundations that struggle to keep the world together.

Putin’s articles and public speeches are often based on the premise that the world is a dangerous and unpredictable place, and that the actions of the world’s most powerful countries only exacerbate these threats. It seems obvious, but for some reason time after time the medium and long-term consequences of wars, invasions, interventions and reforms have come back to bite the people who initiated them. The past ten years yield numerous examples of this – from Iraq to Libya.

Putin is not alone in his refusal to accept this state of affairs, but he is the one known as the vanguard of resistance. This is primarily because Russia, despite its decline after the collapse of the USSR, remains one of the most dynamic countries and one that does not attempt to hide its ambitions. Secondly Russia’s nuclear and raw-material potential means her opinion cannot be ignored. And finally, in terms of the president’s specific character, Putin simply stands out from the other politicians for his honesty and straight-talking.

Many political observers are convinced that Putin is a wily strategist, guided by a “big plan” of expansion, reinstating the empire, strengthening the so-called power vertical and heading back to the USSR. This lends the Russian president an additional image: one of pure power. But of course, Putin himself is unlikely to lay much claim to this strategic concept, at least not consciously.

The president of Russia is a reactionary in the sense that he likes to react. His favourite political ‘tactic’ is to respond to a stimulus. That way he knows the source and character of the challenge and can act quickly, effectively and without error.

The other meaning of reactionism , opposing changes, was never characteristic of Putin to begin with. It only became associated with the Russian leader when he seemed to conclude ever more frequently that new generally meant worse.

The ever more turbulent situation outside of Russia worries Putin mainly because it resonates with the internal manifestations of instability, turning them into louder and more insistent threats. Like many Russian conservatives before him, Putin is always saying the country needs time to secure stable, sustainable, managed development and that it is still too soon to give in to the demands of those fighting for liberal democracy.

Over these years, we have resurrected the carcass of a state that was destroyed after the collapse of the USSR in the 1990s, and now we need to strengthen it, we still need time for further construction [Russian – dostroika], said Putin at a pre-election meeting in February. His choice of words is interesting – he deliberately declined from using perestroika [literally rebuilding] the term coined by Mikhail Gorbachev, which many Russians see as a synonym for catastrophe, and went for further construction [dostroika] instead. The Russians words come from the same root, but dostroika means a careful completion of construction, with a sense of work still in progress.

Putin understands that the protests with which a new, more enlightened society met his return to power, were based on more than just provocation from the West (although of course he also believes there was a strong element of this), and that these protests signified changes happening within Russian society. But he is still convinced that the protesters are wrong, no matter how much they believe in what they are doing, the time is just not right for this yet. Let’s take a bit more time and for now we’ll carry on slowly constructing and polishing...

Time and time again Russian history has shown that the conservatives never find the extra time they so need. Something has always happened, and their efforts, even if they are correct and constructive, turn to dust under the insistent march of time and change. Changes are certainly not always for the best, but when they are happening no-one is thinking about this.

Having returned to his position as head of state, Putin has not delivered magic solutions to the problems that have arisen, but he came with his own characteristic sense for what is dangerous, for the fragility of everything around him. It is hard to accuse Putin of having no strategy. These days no one seems to have one, and in our unpredictable world there doesn’t seem to be any point. The situation in Europe shows that constructions that appear well-thought-out and stable can crumble like a house of cards. As a conservative and a realist Putin is soberly evaluating what has happened, but he cannot find answers to the mounting problems we face.

The writer is editor-in-chief of Russia in Global Affairs magazine.

This opinion was first published in Russian in the Ogoniok magazine.