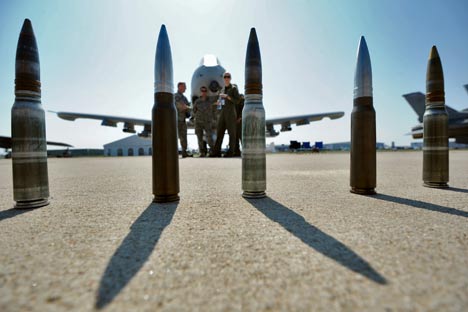 The outcome of the visit by the Russian defence minister Anatoly Serdyukov to New Delhi heavily underscores three things. One, for the foreseeable future, Russia will remain by far the number one partner for India in the defence field, with Israel and the United States coming in distant second and third places. Two, the steady upswing in the quality of the defence partnership with Russia is continuing and there is a constant search to innovate the partnership with newer forms of cooperation – in sharp contrast with the civilian sector of the ties.

Third, the partnership rests on the solid bedrock of mutual trust, which helps withstand occasional hiccups like the last-minute delay in the handing over of the long-awaited aircraft carrier Admiral Gorshkov. The new multi-billion dollar contracts reportedly finalized at the discussions between Defence Minister A.K.Antony and his Russian counterpart include an additional 42 new Sukhoi-30MKI aircraft, which will supplement the 230 aircraft that India is already buying; another 71 Mi-17 V5 helicopters in addition to the 80 of these “gunships” that India is inducting into the armed forces. Besides, the two countries are having a project to develop a new generation of “hypersonic” BrahMos cruise missiles and are nearing the finalisation of the 11 billion dollar contract for the final design/R&D phase for developing the stealth fifth-generation fighter aircraft.

The joint venture to develop the fifth-generation fighter aircraft is poised to take the Indian-Russian defence partnership soaring to unprecedented heights and sets a record of sorts not only for the two “time-tested friends” but also, for that matter, for any two countries in the world at any time.

In a more fundamental sense, though, while it may look far less sexy than the fighter aircraft and helicopter gunships or “hypersonic” cruise missiles, the developing cooperation over the utilization of the Glonass, the Russian satellite constellation, for military use by the Indian armed forces and the likely joint production of satellite receivers would stand out. It signifies to the quality of the overall Indian-Russian relationship and the mutual trust of platinum grade between the defence establishments of the two countries.

The point is, it is not a question of the United States sometime soon during Barack Obama. 2 genuinely hastening the lifting of some more of the decades-old restrictions on the transfer of dual use technology to India. The leasing of the nuclear-powered submarine Chakra; the “hypersonic” BrahMos; Glonass satellite navigation system; the approaching implementation stage of the development of the fifth-generation fighter – what these high water marks of partnership show is that Russians and only Russians can give technologies of a kind to India that no other country will.

This is where the reshuffle in the top hierarchy of the defence industry in Russia becomes of high importance for India. Russia has embarked on a structural reform and modernization of its defence industry. The accent is on developing cutting edge military technology. Interestingly, the ambitious reform program includes private sector participation in developing and manufacturing new weapons.

In the appointment of Deputy Prime Minister Dmitry Rogozin in charge of this critical area of Russia’s modernization, Russian leadership has factored in the contemporary world situation and Russia’s determination to emerge as a major world power in the emergent multi-polar setting.

Rogozin summed up in an interview earlier this week, “Russia is the most consistent Indian partner and the Indian share in sensitive military exports amounts to 30%. In our military cooperation, we have never been driven by political ambitions or expediency. We have never supplied weapons to India’s opponents.”

Rogozin is a statesman with a world vision and his faith in the imperative of Russian-Indian partnership in the contemporary world situation works to our advantage. Most important, his ideology bears striking similarity with our own national aspirations of development.