Russia needs a paradigm shift in relations of capital 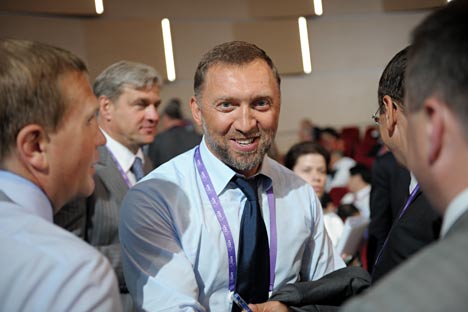 Oleg Deripaska: "What we need now are 100–150 trained and experienced managers – responsible, honest, and loyal to the country. We need them to occupy all key positions, in both state-owned and private companies." Source: RIA Novosti / Grigory Sysoev

The outcome of this debate will determine whether Russia starts growing rapidly or continues to drift along in a state of sluggish depression. The Expert magazine talked about these issues with Oleg Deripaska, a prominent Russian industrialist and Chairman of the Supervisory Council of Basic Element.

Expert: Russia’s federal budget is bursting at the seams. Let’s compare the volumes of securities in Russia and the United States. Municipal securities are particularly representative, as they account for approximately 26 percent of GDP in the U.S. and 0.6 percent in Russia. What should be done to convince decision-makers that new approaches are required?

Deripaska forecasts construction boom in Russia in next 20 years

Oleg Deripaska: I don’t know. At one time, budget relations had been changed in such a way as to take money away from the constituent entities of the Federation and put it into the federal budget, from where they have been distributing it little by little. Those who have exceeded their borrowing limits aren’t going to get anything. Plus, of course, letting the constituents borrow at 18 percent APR, given the current cost of borrowing, means pushing them down a financial sinkhole.

As far as taxes are concerned, the first blow will be once more dealt against entrepreneurs and against companies. The authorities will rush into raising taxes, into forcing owners to increase the assessed value of their property, etc. This will be a highly unpopular step, but one that will have to be taken, under the circumstances.

This is when real democracy will begin – as soon as people clearly understand their rights and responsibilities and understand who is responsible for what. There’s little time left. It’s impossible to move forward without making changes to credit, monetary, and financial policy.

If we do, we need different kinds of people to be in charge of financial or fiscal policy. We need a paradigm shift. We are now living in a state paradigm that doesn’t imply any improvements. Yes, there’s steady growth, at about zero rate.

Unfortunately, we understand that soon, after about four years, it will come to an end. Shale oil will follow shale natural gas; the markets are open. Without a doubt, we won’t be able to compete within the open economic system in which we find ourselves after the WTO accession, with, say, an entrepreneur from Korea, whose debt cost is 5 percent or with a businessman from the UK, who can borrow at less than 3 percent.

I’m talking about a seven- to eight-year time horizon here. Our resources – electricity, transport, fuel, or natural gas – are comparable in price or even more expensive. The level of productivity, the efficiency of our human resources is much lower. We are in a pre-crisis situation into which we have forced ourselves, by pursuing, among other things, this kind of financial policy.

Expert:How can the paradigm shift? How can the political course be changed? Is this problem of democracy?

O.D.: I wouldn’t rely on democracy at this time. What we need now are 100–150 trained and experienced managers – responsible, honest, and loyal to the country. We need them to occupy all key positions, in both state-owned and private companies. We are all in the same boat. Order must, of course, be restored in education, in healthcare – no one is happy with the way things are now. People must have a conscience. Once conscience wakes up, everything will be in its right place.

Expert: So we should fear something completely different from the mythical second wave of the global crisis?

O.D.: Yes. We should lagging behind forever in areas like labor productivity, speed in the renewal of fixed assets, and speed in the creation of new production.

Many countries, well-trained for tough conditions and prepared for changes, are now taking the next step. But we will keep falling further behind. And our compatriots will be telling us: “Stop dumbing us down; look, we visit Turkey – it’s an advanced country.” China is now, too. This was unthinkable fifteen years ago, but now it is a lesson for us. We can accomplish a lot here, even within three years.

For example, bring down the cost of long-term borrowing to 5 to 5.5 percent. That’s what the President has mentioned in his decrees. This is doable, but it’s necessary to start working for this to become a reality.

The article is abridged and first published in Russian in the Expert magazine.