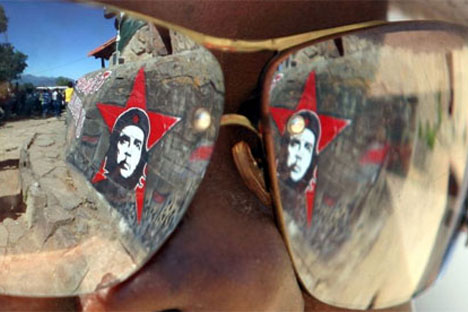 Che described as the “embodiment of the mythical and literary types that have always struck a chord with the people.”

Forty five years after Che Guevara’s death a senior former Soviet/Russian intelligence officer paid tribute to the legendary revolutionary, disclosing some details of his life and death in an exclusive interview with RIA Novosti.

Lt. Gen. Nikolai Leonov (Ret.), of the Russian Foreign Intelligence Service (SVR), a predecessor to the KGB, who first met Che long before the victory of the Cuban revolution, described him as an “overwhelming figure” who belongs to all generations.

“He was the embodiment of the mythical and literary types that have always struck a chord with the people,” said Leonov, who retired as head of the KGB analytical directorate in August 1991.

“In such cases I think of Christ the Savior and Don Quixote.”

Leonov said he was the first Russian to meet Che, in 1956 in Mexico.

“He was just another guy. At the time we were both average young men,” he said, adding that no one who had ever known him could think of a case where Che Guevara was cruel.

Che was an absolutely independent, “holistic” political figure, who “always acted in Cuba’s national interests, as well as in the interests of all Latin American nations,” the retired general said.

Guevara was greatly impressed by the Soviet reaction to the victory of the Cuban revolution, in particular the readiness of then-Soviet leaders Nikita Khrushchev and Alexei Kosygin to provide all-out support and assistance.

Che had flown to Moscow not as a diplomat but on a mission to sell 2 million tons of Cuban sugar that could not be sold in the US.

The russophile dilemma in India

Waxing sentimental about the USSR, Leonov noted that Che was amazed at how more than 260 million Soviet citizens were able to live without having to worry about becoming rich at the expense of others.

Che dreamed about Man free from the lust for money.

Money is a horrible thing that sticks to you like toxic glue, Leonov cited Che as saying.

Commenting on Che Guevara’s revolutionary activity in Congo, Bolivia and other Latin American countries, Leonov said it would be wrong to compare it to the export of colour revolutions practiced by the Americans across the world.

“Che had very clear social goals - to make life better for the people, for the majority.”

“None of those who are now organizing colour revolutions cry at the sight of other people’s distress, but Che Guevara cried,” Leonov said.

“That was why he went to Congo, Bolivia, and Cuba.”

Che was killed on orders from the CIA, Leonov claimed.

Although the order was formally issued by Bolivian President Rene Barrientos, he acted on peremptory advice from the CIA station chief in Bolivia who was in charge of the operation.

The US acted in great hurry to get rid of Che, seeing him as “a colossal danger - greater than a nuclear bomb dropped on US territory.”

“His image still haunts the US now.”