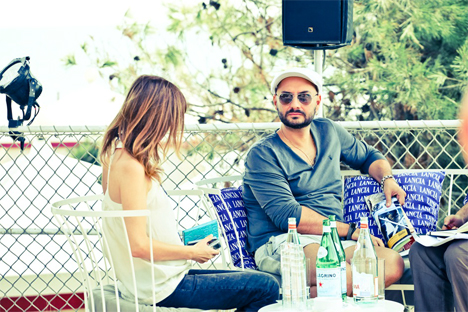 With new support from the Cinema Fund, new Russian cinema may finally have a chance at bigger distribution deals.

This fall promises to be a turning point in the way Russian cinema is seen by the Western market. The week of Oct. 15–20, Moscow hosts the first Red Square Screenings marathon of private screenings of Russian films for foreign distributors. The goal of the screenings is to attract more international market players to Russian film, enabling Russian filmmakers to earn money from the sales of films, not just government subsidies.

Russian cinema has already generated some buzz in 2012. At this year’s Venice Film Festival, a billboard with rotating posters for Kirill Serebrennikov’s “Betrayal” was located directly opposite the Movie Palace, while ads for “Me Too” from Alexei Balabanov and “Anton’s Right Here” by Lyubov Arkus appeared daily in the press. The reason for this is simple — for the first time, the Russian Cinema Fund provided the necessary budget for producers to promote their films.

Said Yelena Romanova, head of the Cinema Fund’s international department, “It was united massive financial support; we were working on three films at once. One movie on its own doesn’t give you the leverage to get much done, but representing a complete package of films opened doors for us.”

As a consequence of the marketing efforts undertaken by the fund, the films involved suddenly attracted major sales. Romanova said that the producers of “Betrayal” succeeded in signing deals with international distributor Elle Driver, while the rights for the film’s Italian distribution were hotly contested.

Anton Mazurov, creative director of the Russians Are Coming agency, which is organizing the Red Square Screenings under the auspices of the Cinema Fund, described the challenges of selling Russian films in the international market this way: “Imagine the idea that each country has its movies on a giant hard disk, and all wired up to an international network. The problem is that Russian films aren’t linked to that kind of network at all. This kind of networked infrastructure is, in fact, the circuit of film festivals and movie markets.”

During the Soviet era, the Russian movie business was completely detached from the rest of the world. Filmmakers survived on government handouts from the State Cinema Agency (GosKino), and producers worked with no expectation of income from screenings. The system of funding that developed under the structure of Soviet state funding was highly corrupt — films by favored companies or directors were greenlighted while others languished.

Eventually the production of animated films, documentaries and low-budget art-house movies was transferred to the Ministry of Culture. It was at this point that the Cinema Fund appeared, gathering together eight (now 10) of the largest Russian film companies and channeling funds to them for commercial moviemaking, providing their accounting was scrupulously transparent.

“This criticism stimulated contact between the Fund and the movie industry,” said Mazurov. “Neither the Ministry of Culture nor GosKino had ever maintained links with people actually working in the film industry. And then people appeared who started to communicate and get experience — and cinema began to grow with them.”

The result of this dialogue was the decision of the Fund to expand from just making movies to funding their promotion and sales.

“The whole way that movie rentals are organized in Russia cuts cinemas off from any movie aimed at slightly older audiences that might be interested in films which raise more questions,” said producer Yevgeny Gindilis. “They have that kind of audience in Europe; so independent films in Europe have a much better chance than in Russia. You can see that with a film like Alexei Fedorchenko’s ‘Ovsyanki’ (Silent Souls), which did well at the box office in Europe.”

Until now, the more sophisticated European moviegoer has been aware of just a trio of names in Russian filmmaking — that is, Andrei Tarkovsky, Alexander Sokurov and Andrei Zvyaginstev. Movies that are aesthetically beyond that trio drop off the distributors’ radar. They’re hard to classify, hard to position and, as a result, hard to promote.

“Distributors — I mean those who buy movies for screening in their own country or part of the world — know very little about what’s happening in Russian moviemaking,” said Mazurov. “The history of Russian filmmaking is the history of an unsellable product”.

The organizers of the Russian international movie market see the answer in establishing communications between the major players. Said Mazurov, “It’s the only way that Russian producers can find out what Western distributors are looking for.”